Why describe him as wise and strategic? Wyatt’s keenly aware that in addition to helping others, pro bono work has created job opportunities he might never have had were it not for the quality work he produced on pro bono projects. His career illustrates the many ways pro bono work can benefit pro photographers.

Every year, Wyatt shoots the Public Relations Society of America (PRSA) New Jersey Chapter’s awards ceremony for a fee. Recently, they asked if he would cover an upcoming monthly meeting free of charge. “I accepted the assignment because it helps the group and there’s always a chance that one of the other ad agencies or PR firms will need photography at some point,” he explains. “When they see that I’m easy to work with, they often hire me for an assignment.”

Back in the ’90s, when Wyatt joined the Faith Fellowship Ministries in Sayreville, New Jersey, he wanted to give back with his photography. Recognizing he had an eye for composing good shots, the church videographer taught him how to use a video camera on a professional level. “Next thing you know, I was hired by MSNBC, Comcast Sports, News12 NJ as well as others as a camera operator,” says Wyatt.

Volunteering at his church also led to working with some large ministries. They include Joel Osteen’s organization, which hired him for a few paid assignments. “Being in that circle, I got to meet people who took me to the next level. I was even hired to travel to Brazil, Costa Rica and other places for similar projects.”

Furthermore, in 2016, Wyatt shot the Moscow Ballet for the first time. “They wouldn’t have hired me without seeing dance work I’d done in the past,” he says. 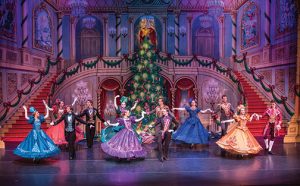 “Knowing they were performing in a theater in Somerset, New Jersey, I called and said I’d like to shoot for them. I showed them ballet and other performing arts photos I had shot free of charge—or for less than my usual rate—for the State Theater of New Jersey and Princeton’s McCarter Theatre Center. They gave me an assignment to cover a two-month tour, which led to two additional tours.”

He cites his support of the Drum & Bugle Corps as a prime example of giving back out of gratitude. Because he credits the Corps with saving his life, this year—his 50th year supporting the Corps—he’s shooting eight shows pro bono for Drum Corps World. The newspaper does not have a photography budget.

In addition, Wyatt recalls the time, in 1969, that his bus driver father drove the Drum Corps to Wildwood, New Jersey, for the American Legion weekend parade. His dad insisted he come along. “Despite resisting at first, I fell in love with it,” he says.

“Most of my friends from that time are either dead, addicted to drugs or in jail. Joining the Drum Corps got me away from all that negative energy. It also taught me discipline; how to perfect my craft as a drummer; how to get along with people; and how to strive to be the best at what I’m doing. It has a lot to do with my success as a photographer today.”

As he tells photographers at camera clubs, camera stores, PhotoPlus Expo as well as WPPI, “If your dream is to do ballet, concert, theater or sports photography—even weddings—you have to get your foot in the door. Accept some projects for little or no fee and show that you can produce quality work. Eventually you can start earning good money. Pro bono is the key.”

For more Ron Wyatt images and information go to ronwyattphotos.com.