The photo and imaging trade show has fallen off the calendar. This was driven mainly by postponements and cancellations caused by the pandemic and the subsequent need to avoid travel and large crowds. Yet, just as many folks will continue to work at home and not return to a full-time office, this hiatus has also revealed a questioning of the need for an industry trade show itself.

It’s as if, given time to think, some exhibition and trade fair companies—and more importantly, exhibitors—have decided that as far as the photo-imaging sector is concerned, there’s no profit, financially or market-wise, to be had in such endeavors.

Some organizers put off shows for another year. CES, NAB, PhotoPlus Expo and others smartly postponed their live events; they opted instead to go “virtual” with online exhibitor postings and seminars.

However, the granddaddy of all photo industry trade shows, photokina, was not only postponed but completely shut down. Moreover, there are no plans to revive this event under the Cologne trade fair banner going forward.

Goodness knows the photokina team worked hard to evolve toward an interesting community approach that in other times might have gained traction, if only on a regional basis. The problem was that the industry’s main players were simply not buying it. Further, a good deal of the photo press had already filed their postmortems way before the show was to open.

Yes, there were issues of timing, of approach and such. However, apparently the upper management at the trade fair itself looked long and hard at the prognosis and found “no alternative,” as it was phrased in their press release. So, they put an end to it all.

I can certainly understand the postponement/cancellation of large trade shows, at least in the near future. But it goes without saying that I am saddened by the loss of this wonderful industry institution.

In light of the spate of closures and postponements, I did some research. I found a proposal by a large overseas trade fair scheduled for late winter 2021 that has yet to cancel the live version; that too may change by the time you read this. The posting spelled out the procedures that exhibitors, their staff as well as attendees must follow.

This included, of course, masking; temperature checks at the door (with a required isolation room to whisk away those with a fever); mandated submission of personal information for possible contact tracing later; face shields, hand sanitizer and anti-droplet partitions at all demo booths and stations; and also 15-minute maximum demo times for individual customers (appointments required), who will be offered neither food nor drink. 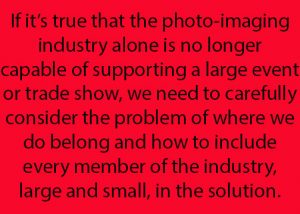 As far as talks, seminars and classes at booths, stages must be set at least two meters from the front row with the audience spaced at least a meter apart. In addition, cove-like partitions need be erected between the stage and aisles so there’s no crowding in the aisles.

Perhaps the greatest change from trade shows I’ve attended (and one I would welcome as a carryover), the event will have no barkers (my phrasing); that is, speaking loudly in an attempt to attract visitors in the hall and aisles to the booth. Oh, and no parties or after-show dinners.

I truly laud the organizers for their efforts to ensure the safety of all concerned. However, going to this extent makes you wonder about what we have come to in dealing with running and attending a trade show these days. In truth, there is no point in even thinking about a large show gathering until we can have some confidence in the slowing or, better yet, defeat of this virus.

Return to the Big Tent?

As to specific photo-imaging trade shows on tap for the coming year, there’s a probability that those slated in the first and even second quarter will be postponed. A search of such events online comes up with “status not confirmed.” I don’t want to rain on anyone’s parade, but given that all goes smoothly (and that hasn’t been the case thus far), we can only hope that shows in the late summer or fall might take place.

Given that things may return to some kind of “new” normal by fall (Dr. Fauci recently predicted Broadway would reopen in late 2021), we are left with the question: what to do with an industry in search of a trade show?

Do we await a “big tent affair,” such as IFA in Berlin in September 2021 or CES in 2022? These are costly, major consumer electronics affairs that will draw photo-imaging companies with deep pockets and multiple offerings outside their camera and lens divisions, as well as other imaging companies with worldwide marketing muscle. Yet, what of the “smaller” businesses who maintain independence or have yet incorporated into larger distribution firms?

These independents, start-ups and niche product suppliers, who were an integral part of photokina, risk being lost in the crowd. Indeed, slogging through the “big tent” halls filled with smart refrigerators, doorbell cameras and supersized TVs to find any trace of gimbal heads or LED lights for tabletop photography is frustrating.

Those of us who witnessed the decline and fall of PMA’s empire watched as former PMA exhibitors, aside from the big boys, were cast into the nether regions of side rooms and the infamous Hilton Annex at the debacle dubbed “PMA at CES”; there, many a pinochle game was played to fill the hours awaiting visitors.

Yet, even without a trade show, imaging companies have not sat still. They’ve responded with some old and some newly innovative routes to reach their dealers and customers. Online seminars concentrate on budget and marketing efforts; they hold Zoom press conferences; promotions are offered via online shops or large mail-order dealers; and they engage through special events.

Go to any photo-imaging company website and you’ll find a host of connection points, contests, guest speakers and such. Indeed, many companies are not awaiting the return of the trade show cycle to bring out new products, some evolutionary and some revolutionary, just like they would in “normal” times. In short, if a consumer is really into photography, there’s a constant stream of news and events to keep engaged.

In past columns, I have discussed the importance of the photo “community” and reinforcing and growing its base. Once we can again behave as the social animals we are, it’s important we are ready to go. But to go where?

Perhaps we should concentrate our efforts on engendering a shared experience of photography through events; support of photographic workshops and schools; enhanced dealer engagement; photo excursions and exhibitions; photo publications and associations; smaller road shows; and also festivals—in all, explore ways we can demonstrate that working with a real live camera and accessories offers an exciting and rewarding experience. And focus on promoting how printing is a worthy craft and how photography itself can serve as a positive affirmation in difficult times.

Taking Off the Gloves

Concurrently, we should reconsider our approach to dealing with the smartphone challenge. I’m suggesting we take off the gloves in that regard. I have an iPhone and good cameras. However, to me the smartphone is like a 110 vs. a 35mm camera (pardon the archaic reference, but it’s apt).

I use the phone for functional snaps and finding the best pizza in town. I also use it to follow a trail via GPS so I don’t get lost in the woods. But when I’m in those woods, I make images with my camera—simple as that.

We have to wake up to the fact that we cannot outdo the smartphone at what it is good at; but we should also concentrate on what the camera and lens are great at. Perhaps that’s the subject for another column.

Building from the Ground Up

An associate from Germany who reports on imaging, commented on photokina’s demise. He wrote that it’s easy to tear something down that exists; however, it’s difficult to build something new that doesn’t.

I don’t think we can just shrug off the loss of what was once the world’s leading photo and imaging trade show without considering what we will replace it with. Moreover, I don’t necessarily mean another large trade show.

Perhaps it’s time to focus our collective energy and rethink the roads that led us to where we are today. If it’s true that the photo-imaging industry alone is no longer capable of supporting a large event or trade show, we need to carefully consider the problem of where we do belong and how to include every member of the industry, large and small, in the solution.