Home George Schaub Selective Focus: A Corner Turned—Looking Back at What Was to Come 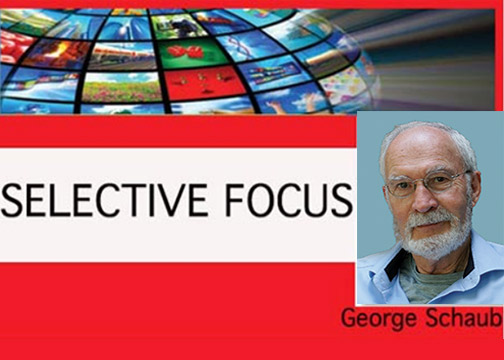 As it was a rainy day, I took some time sifting through old hard drives before they died to see what sat within. Looking back, I came upon a report on the 2010 photokina show I did in my role as editor of Shutterbug. It was a time capsule from the halcyon days of photography when sales volume was 10 times what it is today. I offer it not as a nostalgic trip down memory lane but as a commentary on how that watershed show presaged what was to come. It also represented a corner turned in both industry attitude and product offerings. Indeed, this would radically change the face of photography in the years ahead.

In the following, some commentary precedes the report’s text, the latter being in quotes.

Who could have imagined that DSLRs and dedicated lenses would all but fade from new offerings in 2022. Major “traditional” camera makers and independent lens makers shunned mirrorless for many years after photokina 2010. However, obviously all of that has changed in a radical way.

“A number of the newest cameras, aside from the usual raft of point and shoots, were in the somewhat new class of ‘mirrorless’ systems. The appellation makes them sound like they are missing something and defines what they are not, which is a DSLR. The ‘R’ in DSLR of course stands for ‘reflex,’ or the way light is reflected from the lens up via a mirror to the eyepiece finder, which is then jerked up and out of the way so light can travel straight back to the sensor, thus the characteristic ‘clunk’ of the exposure.

“The newest ILCs from the likes of Sony, Samsung and Panasonic (note the consumer electronics community) dispense with this setup, all with claimed enhanced AF speed and accuracy. They use fewer moving parts so cameras, like the modestly priced Sony Alpha 55, can deliver 10 frames per second with an AF setup that follows the action in as impressive fashion as past high-priced, high-speed DSLRs.

“The question is—will this new approach sound the death knell of the ‘classic’ DSLR design? There are certain benefits to mirrorless, such as enhanced live view options, with much faster AF than previously available; the use of APS-C-size sensors in much smaller main bodies; and, thankfully, enhanced viewing thanks to much higher resolution screens.” 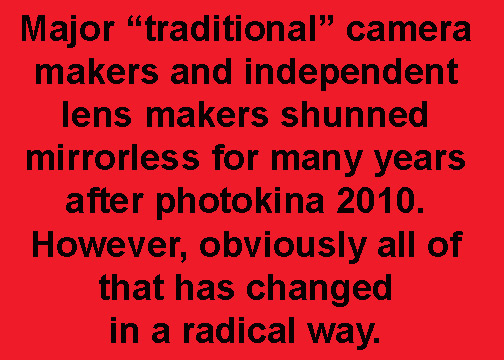 “Frankly, I have never been a fan of EVF (electronic viewfinder) viewing, though I understand its low-light benefit. They have gotten better, no doubt; but call me old-fashioned, I still think a reflex finder gives a more detailed, brighter view, especially in contrasty conditions or when light sources enter the frame.

“Yet, despite the distinctions in viewing, with the so-called ‘hybrid’ viewfinder approach and all the other factors marched out by makers, a corner was turned and the subject was broached—why do cameras with sensors larger than those in a phone or point and shoot need be in the old 35mm form factor? If we do not need mirrors, why design cameras that look like they have mirrors in them? Indeed, one presenter at a press conference ironically referred to the 35mm form factor as a ‘neo-classical’ design.

“And what of lenses for these different models? In response, the show was filled with adapters, such as one for mounting old Contax lenses on the new Olympus Pen. We were told that more and more lenses will become available for these cameras as the years progress.”

Way before we called it AI (artificial intelligence), the 2010 show highlighted the opening salvo of extended options for in-camera processing as well as lens profiling and correction, with algorithms that offered tricks like HDR and in-camera panoramic stitching already in the bag. Who could have known that AI with eye AF and similar would become standard fare?

“Every camera brought out these days is ushered in with newer, faster, more intense image processors. The jazzed-up processors allow for all this video activity; enhanced live view; less noisy high ISO images (and higher ISO settings); and, in large part, layers upon layers of mode and imaging options. Indeed, some makers claim that the APS-C sensor and image processors of today rival the DSLR full-frame sensor image quality of the recent past.

“Image-processing power can now make up for deficiencies in hardware. This means that you can choose more ‘art’ filters; shoot at previously dizzying heights of ISO with much less noise; and, most interestingly, that certain lens deficiencies and distortions can now be overcome through image processing through in-camera lens profiles—soon an increasing fact of life.

Intelligent This and That

“Knowledge of the craft will increasingly surrender to software. Learning about which mode to choose or button to push for technical and creative use may supplant the need to understand how to read light, select an aperture for depth-of-field effects and expose to capture the fullest range of tones possible.

“Today’s cameras incorporate HDR effects and creative image modes into the normal course of making an image. Soon, processors may get you to give over your own creative decisions to their ‘scene and image recognition algorithms.’ And, of course, none shall blink; all children will be captured with a smile. And don’t fuss about focus, white balance or how low the light. Don’t worry, be happy and let the machine handle it all.

“This may sound absurd, but if you follow the logic of where these image processors are heading, you’ll see that ‘intelligent’ this and that are really solutions to old photographic problems that you need no longer concern yourself with—or should you?

“One more note about image processors and cameras today. For years it was debated whether the camcorder would eliminate the still camera or the still camera the camcorder. There’s little doubt that, for many shooters today, video in their still camera is de rigueur and any maker showing up without same does so at their peril. Of course, you’ll have to get HDMI adapters and stereo mics and the like if you want to get it right. However, it has to be noted that as of this show, still and video have converged, albeit in cameras whose design remains primarily aimed at the still shooter.”

The VR of 2010 was 3D, a happily short-lived movement. Yet, it was an attempt to broaden image-making potential and attract content creators—who weren’t yet dubbed with that odd title. I include this section to illustrate how a reach too far had many scratching their heads in wonder and how brief flurries of tech can become candles in the wind.

“Having seen 3D stills from a number of makers displayed on large monitors at the show, all this reporter can do is sigh; not from disappointment but from having seen the stereo or 3D image rage come and go over the years. And mostly go after an initial flurry. Notwithstanding that the 3D image gives some folks a mild headache or, at worst, vertigo, and requires wearing foolish looking and not inexpensive glasses, it strikes me that companies are just trying to reproduce dimensionality with visual gimmicks that pretty much make the image a gimmick itself, and not much else.

“Yet, it certainly is clever and can be fun, if you want to give it a try. Panasonic poses the easiest solution with their split image lens that produces an MPO file that can be read and seen on a 3D TV, if you can find one. Like lovers of cult 3D movies of the 1950s, this movement, I fear, will attain a similarly small group of adherents and not much else.”

There still remains a group of products and companies that harken back to what I call the “chemical days.” That’s back when film was spooled and “instant” cameras and “film” were on offer. And somewhat hazardous processes, if done in excess, were revitalized.

Appeals are made to the art circuit, aspiring young image makers and those who seek a creative visual arts route away from the digital realm. Nothing basically wrong with it, of course; however, it’s nothing new either. Perhaps all this tells us is that film and instant photography will never go away.

“There seems a marketing inspired movement that dubs those who love to work with film as ‘analog freaks. Or the ‘analog gang.’ These are characterized as rebels grating against the oppression of digital. This attempt to channel rebellion into the embracing of an intricate but increasingly archaic process is another sign of the times. I mention it so we get to the simple fact there is less and less film made and sold today. And it doesn’t look like the trend will change.

“One interesting development is from the Impossible Project, who announced new instant film for the SX-70 cameras of yore. Maybe they should start spooling 127 format as well. And in what had to be one of my favorite booths at the show, Ilford/Harman announced the return of Direct Positive B&W paper; you expose it as cut sheet directly in the camera (pinhole shooters take note) and soup it as you would a normal sheet of B&W paper. They had a ‘live’ darkroom on the show floor where they made prints directly from portraits shot through an 8×10 camera. Daguerre would have been proud.”