The catchphrase “voting with one’s feet” might well define the battle the photo industry is engaged in today. This is a two-way street, with companies and their customers sometimes in step—and sometimes not.

But it’s not only a bit of a tug of war between manufacturers and their end customers. Photo industry companies are in heated competition with each other, and often within themselves. And the outcome will determine both their own and the industry’s success and survival.

In some instances, new technology—read marketing competition—makes one company the leader, if only temporarily. It also often results in other companies playing catch-up, although there is clearly a risk in that for all. On the other hand, and perhaps most important, it’s consumers who certainly vote with their feet (read dollars). This is witnessed by the ”connectivity” and social media trend that spurred the mass exodus from point and shoot and the drop in overall camera sales that gripped the industry. Much to the industry’s distress, a rush toward the door from one imaging methodology to another characterized the switch.

I would argue that the smartphone was not the sole perpetrator. However, the industry’s response was to eventually follow the buyers’ footpaths to make amends. But there’s no question that it got caught short. Advisory groups raised the red flag about how connectivity was key and the lack of it would doom certain cameras. And perhaps cripple the industry at large. Consequently, we all witnessed the long and sometimes tortuous road to the fairly smooth image transfer technology of today. Mission accomplished, but with a fair share of casualties along the way.

Another recent bone of contention is the battle of camera formats—DSLRs versus mirrorless; integral versus interchangeable—and the resultant effect on lens, bag and other ancillary sales. This has been disruptive, to say the least. Viewed from a few thousand feet up, this clash is essentially between factions who are on the same team.  And they are often within the same company. Some posit, for example, that Kodak’s fall was due in large measure to the internal film versus electronic imaging team struggles. One side continually knockec holes in the bow of the other until the whole ship went down.

There was a time when DSLR stalwarts looked down their noses at mirrorless, with concomitant contempt from the other side. Witness the “Dump Your DSLR” campaign from some marketing genius whose company is no longer among us. There followed a “can’t we all get along” period when everyone figured out we are all on the same team. Now the “never-mirrorless” crowd is knee deep in the game, and mirrorless makers are going with larger format sensors. 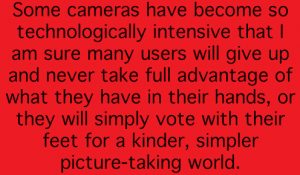 The jury is still out on the format war, but in this case consumers continue to vote with their feet toward DSLRs. However, the previously high margin of difference is slimming, especially in Japan. In the U.S. and Europe, though, according to CIPA reports summarizing 2017, the tilt is still 2:1 in favor of DSLRs in the former and a bit less in the latter of those two regions.

Is this a dichotomy that contains the seeds of its own destruction? To me, it’s just some companies voting with their feet in order to stay alive, and for others simply a way of hedging their bets.

When mirrorless first showed its head above ground, there was a rather long hiatus between inception and independent lens makers getting on board. Those folks follow body sales as intensively as anyone. Judging from recent developments and announcements, they don’t think either format will fade away in the near term. Consequently they slowly, albeit in some cases cautiously, brought out and adapted their lenses to mirrorless mounts. Well, that caution has evaporated and the floodgates have opened.

Sigma, for example, recently announced a major commitment to the Sony E mount. This gives you an indication of which way they think the winds are blowing. Tamron now has glass in MFT, Sony E mount and even Canon M mount. Panasonic and Olympus continue to bring out impressive glass for the MFT format. And Sony certainly remains active on that front as well.

The major DSLR makers continue to match the mirrorless crowd lens for lens. However, quite a few of their recent intros are clearly in high-rent territory. Take for example the $12,000-plus Nikon tele zoom with an integral teleconverter. Amazing glass and functionality, and certainly a lens aimed at pros and enthusiasts with deep pockets. This is to me a showcase product, one that puts the DSLR on a pedestal with technology all can admire. But the technological dominance of major DSLR makers is clearly being challenged. It will be fascinating to see how they respond.

The recent CP+ show intros are worthy of study, Canon being a case in point. The company brought forth new cameras in both mirrorless and DSLR formats, and both are dubbed “entry-level” offerings. They make a clear pitch to smartphone users who want to “step up” into higher image quality, imaging options and, of course, a wide variety of lenses and accessories.

One of their new cameras drops the DSLR price point to a bit more than $385 (body only). That is the lowest price on any DSLR we’ve seen in a long time. Canon also pitched the quality ball to amateurs and enthusiasts with a new flash unit that “auto-tilts” for improved portraits. It’s a rather amazing thing to watch in action, something the straight-ahead and glaring flash on smartphones cannot match.

This step-up approach has been around as long as I can remember, going way back to the days of 35mm film cameras and even 110s. But now the battle seems to be encouraging the step-up from smartphones to real live cameras, not from a lesser camera model to a more full-featured one.

Tried and possibly true, this approach might be tantalizing to those who have become hooked on making good images with their phones and who want to expand their photographic inclinations and activities. Encouragingly, this new wrinkle shows the industry is willing to take on the smartphone with more than connectivity upgrades.

On the other hand, what I call the “internal step-up approach” does attempt to have consumers vote with their feet and buy into the latest and greatest model. Let’s look at a few of these: at one point the industry engaged in megapixel wars, then brought forth RAW image formats, then dropped antialiasing filtration on sensors, then got into CMOS sensors with on-chip processing and focusing points, then came out with 4K video and so forth.

That’s why we’re seeing all those so-called “Mark II” and “Mark III,” etc., models. Each additional technological improvement, or change at the least, merits a new model. And these are showing up with more and more frequency, which to me adds some confusion to the marketing message.

A good many consumers, mostly enthusiasts and of course pros, buy into each of these qualitative leaps. But truth be told, we left as many or more behind with the fresh blizzard of acronyms and complexities these often-minor step-ups represent. And by the way, the megapixel wars seem to be back, with even lens makers making the pitch about how their latest lenses are perfect matches for the new “high-res” cameras.

One problem I note with all this technological talk and functionality is how it instills a fight or flight instinct within potential buyers. I recently tested numerous cameras that came with instruction book tomes that would make a physics major sweat. Some makers simply do not supply full guides in camera boxes anymore; they ask consumers to go online to find out which button does what.

This hardly bodes well for someone who wants to immediately get to work after taking the camera out of the box. In my case, it took a day and a half just to slog though the instructions and make notes to carry with me just so I could go outside to take a picture. A recent model had a menu 14 layers deep. And that was just on setting up image quality and basic operations, with four more tabs equally deep.

In short, some cameras have become so technologically intensive that I am sure many users will give up and never take full advantage of what they have in their hands, or they will simply vote with their feet for a kinder, simpler picture-taking world.

That’s why advanced compacts are making a comeback (although some of these are equally guilty) and why the average smartphone users we are looking to step up may opt to stay where they are.

No, I don’t think makers should dumb down their cameras. I just think they should consider making them simpler to use and eliminate or at least tame the technological kitchen-sink mentality now evident.

You can often catch the winds of change ahead by examining the decisions, and resultant products and marketing plans, made by companies whose greater minds decide when to switch to a different technology that initially might have been intimidating. Are they continuing to play catch-up by chasing trends or are they diving into new adventures in arenas they had not played in before?

It isn’t easy to come up with a solution. However, the simplest approach is to consider what features are relevant to whom, and once that’s decided to determine how to engage and persuade consumers to buy what you have to offer.

The question of success and even survival remains. If we move in a certain direction and take a stand, will the consumer follow? In the end, that is the most critical “voting with one’s feet” issue of all.