When Olympic athletes from around the world race around the track this summer, you can rest assured that every millisecond will be captured using the latest leaps in camera technology. “Badged” photographers from publications and every country that sent a delegation to the summer Olympics will no doubt use the latest high-speed, super AF tracking, high-res cameras and accompanying tele/zooms to cover the myriad events.

Alas, this is one place where cameraphones won’t cut it. They’ll be there; however, as far as the sports photographers are concerned, they will have little use on the field and press pool areas. Instead, the pros will rightfully consign smartphones to record the goings-on at after-event hospitality suites from which selfies of that old gang of mine huddled around the shrimp bowl are shared worldwide.

No doubt about it, the Olympics is one event where real live cameras reign supreme—and camera manufacturers and their marketing teams will (and should) make the best of it.

The Olympics is a quadrennial event; and not coincidentally, it seems perfectly timed for camera companies to bring forth a new set of tools. These are cameras and lenses fit for the tasks at hand that show off the companies’ latest tech. Was it by happenstance that in early 2016, the last Olympics go-round, Nikon brought out the D5? And Canon the 1D X Mark II? They boast 14 and 16 frames per second, respectively. Specs on some anticipated models were not fully revealed as of this writing. Nonetheless, Nikon, Canon, Panasonic and Sony are all introducing (or have recently introduced) cameras and lenses that any sports photographer would be happy to have in their kit.

One more item in this competitive scenario. The summer games are being held in Tokyo, so bragging rights are in a brighter spotlight. The “silly pages” on the Internet are already out with teasers like “DSLR or Mirrorless—Who Will Be the Winner at the Olympic Games?” Well, given that no pro will show up with an APS-C camera, it’s Panasonic/Sony in the mirrorless corner. And it is Canon/Nikon in the DSLR ring. However, all this is just foolishness, like the old joke about Hemingway and Faulkner arguing about the best typewriter.

Promotion and Product at the Summer Olympics

The simple fact is the Olympics is a great venue for the industry to promote using a real live camera when it counts. Moreover, regardless of whether it’s a DSLR or mirrorless model, marketers know that having their camera brand and/or specific model spotted on the shoulder of a working pro at the summer Olympics gives it a definite cachet to a worldwide audience. If I were in their size 9s, I’d make the Games a definite priority on the 2020 planning grid.

There probably are many MBA thesis papers written on brand association and intent to buy; that’s one of the main aims of advertising and how it plays on human nature. In moments of clarity, I’m fairly certain that if I wear a pair of Air Jordans I still can’t dunk when taking off from the foul line; however, perhaps somewhere in the back of my mind I think I can, given the right pair of sneakers. Besides, they feel cool to wear, an in-crowd kind of thing. 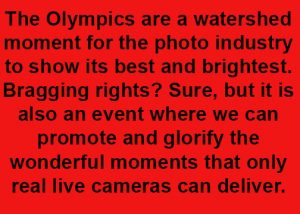 Likewise, what if a high school paper photog sees a Nikon, Canon, Panasonic or Sony worn around the neck of a sports photographer at the summer Olympics; someone whose career she aspires to emulate. If she is working with and not just talking about gear, it stands to reason she’ll remember that small nugget of information when she starts to build her kit.

Like having an actress wear your company’s dress or jewelry on the red carpet at the Oscars (notice they always ask, “Who are you wearing?”), the competition to have your camera (with requisite neck strap) seen among the press pool is not taken lightly.

I remember at one CES watching an NFL football playoff game in a manufacturer’s booth. The assembled salespeople hooted and pointed excitedly at every white tele lens on the sideline. And when the White House press corps photographers put down their cameras in protest a few years back, a public relations person proudly held up a photo of the event. He pointed out how many of his client’s cameras sat on the ground.

Regardless of which camera and lenses are in photographers’ hands, all the companies will cheer for more than the action in the gym or on the track. They understand that the association forged by seeing a pro handling the brand you have in your bag, or are considering buying, can be strong.

First off, you have to figure that people who make their living through high-end photography know what they’re doing when it comes to gear. Second, because the photographer’s job depends on delivering great images, you know the camera works as advertised; so it might follow suit that yours will, too.

Right now, it’s a bit early for companies to share their full set of plans for the Olympics. However, rest assured that quite a few will have the full tech support team on hand with cleaning, repair, lens loaners and more to care for the needs of the working pros. In addition, a number of camera companies are “official sponsors” of the Games. This means they kick into the “Olympic Partner” program fund to get to fly their flag and use the logo in their ads.

Interestingly, at least on the still camera side (as opposed to video-only gear), now that Panasonic is into the full-frame arena with their S series cameras and lenses, they are taking advantage of the occasion.

A recent press release reveals they have collaborated with sports photographer Adam Pretty. Pretty will use a Lumix S series camera to record the event, attaching LEDs to athletes’ bodies to capture the track of light drawn by each athlete’s performance. (You can get a view by searching “Make It Luminous.”) According to the release, “The Lumix S series camera system depicts an unprecedented performance and expectation that will be unveiled at Tokyo 2020.”

Canon, an Olympics Gold sponsor, already issued a release stating that “. . . the company will provide world-class services to sports journalists and photographers from all over the world who will gather in Japan to capture breathtaking images of the historical performances of the world’s top athletes. These images will immortalize the occasion, evoking memories of what a wonderful spectacle the Tokyo 2020 Games were for years to come.”

Furthermore, when the Games were in Los Angeles, Canon issued a portfolio of Olympic posters from the first games to 1984 (the year of the LA meet); they are still in my memorabilia collection.

We should also expect more information from the other full-framers about their plans for the Games soon. They may include on-site releases of great images; ads touting their gear and the results obtained; as well as special portfolios before, during and after the Games from their associated photographers. To do any less would waste an opportunity to promote their new gear and its capabilities.

The only regret is that we now have far fewer dedicated photo magazines to show off these images in their full-page or double-truck glory. The Internet will carry the load, I am sure; however, seeing such images on a phone screen is a bit less dazzling than on the printed page.

We are also awaiting full specs (although by the time you read this, they could have been released at or prior to CES) on some of the cameras that will be highlighted at the summer Olympics. That’s aside from the aforementioned Panasonic S (although, will we see that company come with something new as well?). The site DP Review already dubbed the Sony Alpha 9 II as, in effect, “Sony’s 2020 Olympics camera.” Likewise, you could say the same for Canon’s EOS-1D X Mark III and Nikon’s D6.

Needless to say, each candidate starts at the very high end of price and feature points. While folks are free to spend their money anyway they want, these models are certainly not for the avid amateur, portrait and wedding pro or, for that matter, those folks who do landscape, travel or studio work for publication.

You kinda’ know these models are for a fairly specific class of photographer, with their framing rates as fast as 20x; dual high-speed memory card slots; support for sophisticated video capture and editing programs; FTP transfer; GPS and Wi-Fi; super-multipoint AF covering a large part of the imaging area; large file size output and fast write speeds; options that allow for selective programming to specific tasks; and prices around 5K for body alone.

They are what the industry calls “flagships.“

Of course, this is a naval battle reference that tells you where the commander is afloat and where you should look for orders; (at least in the 19th century). It was adopted by newspeak advertising folks to indicate the best and most important thing a company has to offer. It says, “Here is the state of the art for us that shows what we can do.”

However, it also tells you where the company is going. That’s because just about every tech advance in these premier models tends to trickle down to enthusiast models; they then, in some cases and often in abbreviated form, meander to beginner models as well.

Along with amazing capabilities comes the need for peripherals that handle the load. They include battery power and longevity; memory cards with blazing read/write speeds; more power computing; and of course, tripods/monopods, bags, flash, image stabilization and so forth.

In short, the Olympics are a watershed moment for the photo industry to show its best and brightest. Bragging rights? Sure. But it is also an event where we can promote and glorify the wonderful moments that only real live cameras can deliver.

So, let the Games begin.