You could almost see it coming. In the past two sessions of the previously biennial photokina, there seemed to be a search for identity and a reaching out to bring more public engagement in the trade fair. There was also a fair amount of padding in both days and hall usage involved.

To their credit, the folks at Koelnmesse took a number of different tacks in an attempt to bolster the show’s attendance and reputation. Now, a year after the close of the last show in 2016, they’ve made their move. A new show manager was brought aboard, Christoph Menke.

From what I could tell from a recent interview with him forwarded to me by Franz Balve, a photokina liaison who has done yeoman duty for the trade fair company here in the States for many years, the show may indeed be returning to its roots—albeit in twenty-first century fashion.

As someone who attended every show for nearly 30 years, there was a sense of visceral excitement about attending the preeminent worldwide show of photography (or, as it evolved, “imaging”). It was first and foremost a planet-wide show, with attendees from every country engaged in the trade. It also was a gathering point for photographers from around the world. There were major exhibits and gallery shows on the fairgrounds and all around Cologne. 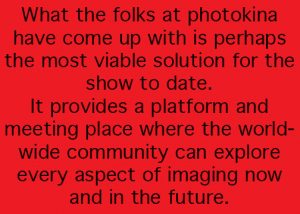 I won’t bore you with reminiscences from an old show vet. Suffice it to say that compared to, say, CES, it was a gathering solely dedicated to the photo community. Compared to PMA, it was more than a trade fair.

It was also a show where companies waited to unveil their new products and technology: they knew they would get play in the press and the attention of consumers and pros worldwide. And perhaps because the Internet was nonexistent, or just emerging, there were actual unveilings that were not preceded by leaked sneak peaks or company-issued press materials on Facebook. \

However, in the last few cycles, everyone knew what would be on offer before they even arrived. This considerably dampened the anticipation and excitement. I did not attend the last photokina in 2016. I sat at home and knew everything that was coming out even before those making the flight over from the States got on their planes.

Now that product cycles spin faster than a dryer in a laundromat, and the buying season gets pushed further and further back, manufacturers are loathe to hold back announcements just to fit into any show’s calendar.

Speaking to the “annualization” of the show, Menke stated, “We acknowledge the significantly shorter innovation cycles of those new technologies compared to established capture technologies. For instance, the software industry has always been characterized by short development cycles. To offer these industries a suitable exhibition platform, the answer can only be a shorter cycle.” Well yes, but as the saying goes, “Timing is everything.”

Now that the show will be held annually in early May (beginning in 2019 with a goodbye September event in 2018), it would seem to fit well into some manufacturers’ product cycles (spring show equals consumer winter holiday buying), but probably not others. 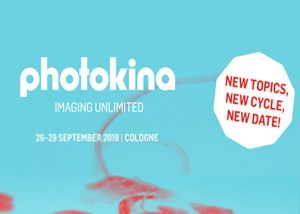 I have noted the almost total lack of “coordinated” product releases over the past year or two; that is, every manufacturer seems to have made up their own release calendar, or let the horse out of the barn prior to the opening of the show door.

True, CES (January) and the CP+ show in Japan (which has announced an early March date in 2018) do garner some breakthrough news. Timing a show, however, has got to be a difficult task in today’s brisk tech and product change world.

As to the short span between the 2018 and 2019 shows, well, I guess they had to start somewhere. But getting exhibitors back to Cologne after only a few months, and with CES and CP+ in the middle, might be challenging. Perhaps the new show concept, that is, a shift to concentrate solely on the expanding imaging product and service sector, might do the trick.

Menke and team have done their homework in communicating their proposed change to key players. According to the interview: “The feedback we received indicated that the May dates will provide an ideal time frame to fully take advantage of international demand before the start of the summer season.”

Although getting all the proposed attendee segments to agree on anything is akin to herding cats, once the May dates settle in they may just be able to carve out their intended niche.

Perhaps the most profound change is in the show content and duration. First off, the proposed show will be scaled back to four days. In times past, the extra days (Friday to Sunday) had been more of a consumer/photo event affair. They were the so-called “public days” that saw most techs, press and business reps heading home after the weekday part of the show. Or spending a few days in the spas of the Black Forest.

Indeed, those public events and draws became part of every day at recent shows. To me, although it might seem snobbish, this diluted the focus and tenor of what photokina had been about.

The content (exhibitors, tech meetings, product intros and the sole focus on imaging) seems, from the interview, to be getting down to brass tacks in terms of the changes and evolution of the imaging world. This includes, according to Menke, “Virtual reality, wearables, tablets, mobile and smart home security . . . imaging software for editing, sorting, storing images . . . CGI & sharing solutions. As an imaging platform, we need to embrace those new technologies.”

Imaging Only, Today and Tomorrow

This is not CES on the Rhine. From what I gather from the proposal, you won’t have to wade through car stereos, 60-inch 6K (or 10K or whatever) TVs and the assorted geegaws you see on display at the Vegas show.

In short, it looks on paper like a tech show that expands the circle around what imaging is and will perhaps become. It will serve as a barometer of the current and future state of the art and craft. None of us except the six-year-out planners inside the manufacturers’ hallowed halls know where tech is heading. But there’s no question that imaging will undergo profound changes in the years ahead. And the photokina folks want to give this a home.

Said Menke, “Our mission is to provide a platform that shows the imaging technologies of the future and promotes the exchange between developers, engineers, start-ups and manufacturers. Take video for example. In times of the YouTube-revamped trend towards amateur videos and an increasing convergence of the technologies for photo and video (4K grabbing), the moving picture is as important as it was in the first hour of photokina.

One of the highlights for the next event will be an Imaging Lab at photokina.”

(BTW, “kino” in German translates to, among other related terms, movie or cinema. I guess “photokina” sounded better than “photokino.”)

Alas, what does all this mean for the now long-gone strictly photo-oriented show? You’d think that “traditional” photo products (cameras, lenses, accessories, etc.) should find a home in the halls. But I’m not sure if this means items like bags and tripods make a good fit. It doesn’t seem like they work in the stated scheme. We’ll see. If not, then they will be at CES or at regional and pro/am events.

But then, just what does remain of what we thought of as a “photography show”? While the slippage in sales seems to have stabilized or even slightly improved in the middle of 2017, there’s no denying the trends of the past few years. Compacts are nearly kaput, and DSLRs and mirrorless models are fighting it out. Yet, lenses are holding their own, and cameras are getting better all the time.

While some feel a whole generation has been lost due to the smartphone, there’s no refuting that the image is today’s paramount form of communication. I don’t see this changing in the years ahead.

What the folks at photokina have come up with is perhaps the most viable solution for the show to date. It provides a platform and meeting place where the worldwide community can explore every aspect of imaging now and in the future. I wish them luck.