It would be an easy write to go over what brought us to this state, one where camera shipments are down 50% from last year; that’s only 10% of what they were 10 years ago. And one where fire sales and increasing reports of factory slowdowns and shutdowns are the talk of the day.

Of course, without public health, there’s not going to be any economic health. However, given that history grinds on, I assume (and pray) we will get through this sooner than later.

It is time for reflection. One of the first questions we in the industry should ask ourselves is: where do we go from here? We can stoke the embers to try to build back a flame; at its heart, the photo and imaging industry burns brightly. However, all we’d get for our labors at this point is ash floating in the air.

The issues are structural, not cosmetic; cooperative, not competitive. I have read too many prognosticated obits on individual companies and, indeed, on the industry as a whole to think we are in anything but dire straits. I am sure greater minds than mine are kept awake at night coming up with ideas. Here’s my two cents anyway.

Perhaps a restart could commence with a consideration of just what the photo and imaging community means. For me, being a photographer and part of this industry means being a part of a whole world of people, places, images and, yes, things that can light a spark in the creative and social soul. Technique, historical awareness, art training, practice as well as mentorship led us all to inclusion in a fraternity that includes pro, enthusiast, family and hobbyist photographers alike. 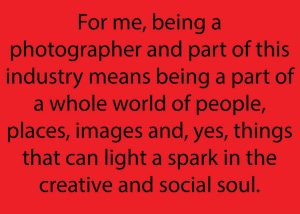 Some of us work in communications, some in marketing, and some in sales and service. Others are touched by photography as a means of self-expression and exploration, and even a way to earn a living. Many of us became involved, I believe, with that first camera under a Christmas tree and the first images made of a pet, a trip to a big city, a bunch of friends horseplaying. And when the bug bit, it bit deep.

In the past, there was no craving for Facebook approval; no nightly Instagram “like” counts; no online groups run by company influencers (who call to mind the old joke about Hemingway and Faulkner arguing about their favorite typewriter). There were camera clubs and cabals of like-minded photographers; and magazines and pro associations. There were numerous social engagements where people could say, “I am a part of this. I identify with others here. I share something of myself that others here share, too.”

Despite all the vapidity on the ’net, I still believe the heart of the industry beats with a love of photography in all its magical forms. We rely on vigorous social activity and interaction; we travel to cities and throughout nature’s wonders, sharing our lives with friends and family to make it work.

Moreover, during its heyday, the strength of the industry supported the neighborhood camera store; a whole bunch of consumer, pro and trade magazines; tech and trade schools; festivals; contests; scientific societies; shows; galleries; sponsored social events; and even mass sporting events. We recognized and honored our stars, pilgrims and pioneers. And we gathered to reinforce our message at shows like photokina and other gatherings for trade, pro and enthusiast.

I merely propose that we again recognize photography as first and foremost a social endeavor, and that community building—real live interaction—is important. That will require a return to support for local and regional shows, for workshops and for live events. The folks at photokina had the right idea in their most recent manifestation. While the trade show per se might not make future sense, certainly the community-oriented show/gathering deserves strong consideration to rebuild a local, and then universal, photo industry infrastructure.

While we’re at it, we might want to add additional resources and opportunities to support the creative use of images, regardless of their source. According to the folks at Rise Above Research LLC: “The pandemic has led to a better appreciation of the value of printed photos and has caused some people to create and order photo projects that they may not have had time to do before. . . . In 2021, with an expected economic recovery from Covid-19 and an increase in events and gatherings that typically generate photo output, sales of cards, books, calendars and specialty photo prints/wall décor are expected to generate over $2.3 billion with unit increases of around 5%.”

You could argue that folks can make individual prints at home now, but there’s more to this market than 4x6s or 8x10s. Printed photos and books are the manifestation of a consciousness that photography and picture making is an integral part of building social and family bonds. Indeed, this should continue as a core message of what our industry has to offer.

This might not sit well with some folks, but the economic reality tells me the cost barrier to entry into photographic (read camera) engagement may be too high. Asking a buyer to pay $400+ for an entry-level camera for their children, given that a few bucks more gets them a smartphone offering image making plus every app imaginable, is a losing proposition.

Yes, I know smartphones killed the point and shoot; however, getting a real camera in a kid’s hands is something special. A kind of initiation into the club. It engages them in a range of creative and fun activities with friends and family that sticking their nose into a phone can never provide.

Think of “instant” cameras and how they kicked off hobby activities, with a popularity that took us all by surprise.

Is it foolish to use our talent to bring out a simple camera with few doodads for a $100 price point? How about creating photo modules for art teachers to use with students? How about giving away the backlog of unsold point and shoots? Schools, creative camps and art centers are great places to start.

Speaking of price points, asking enthusiasts to shell out $2,000 in this economy for an overloaded camera with more megapixels and features than they can ever use is unrealistic, plain and simple. Yes, the technological advancements are impressive. But sometimes it feels more about bragging rights than sensible marketing: witness the drop in sales that seems bottomless. With pros having little social jobs booked going into 2021, let alone the loss in travel, fashion and commercial jobs, there’s little incentive to upgrade. We might want to rethink our need to impress and replace models every six months and focus instead on reasonable prices and stable product cycles.

With sales in the doldrums, debates about DSLR versus mirrorless are moot. Reading the forums on camera websites you’d think it’s political. The mirrorless crowd dubs DSLR fans “mirrorslappers”; DSLRers are still complaining about EVF difficulties. The discussions are rancorous and have little to do with photography and more about warring camps. Maybe that’s a tiresome sign of where we’re at as a society.

It’s as if competition has made us fight among ourselves to the detriment of the industry at large. When times are fat have at it, lads; but when the industry is going off the rails, any victory is Pyrrhic.

Consumer confusion is inevitable when camera makers race around format and viewfinder (and lens mount) tracks or when minor changes engender Mark III and IV versions. It’s like we’re chasing every aspect of technology in the hope something sticks, “connectivity” being a past example.

The recent rush toward “video/still” cameras increases the complications. One version of a model offers more formats and framing rates than even a small-town news crew needs. Another version offers lower megapixels for enhanced low-light images at higher and higher ISOs that might appeal to night owls and stargazers but leaves lots of folks in the dark.

Another example: a recent camera is promoted as having a “vlogging” feature (livestreaming), another wrinkle that promises to link this camera directly to YouTube. However, it has the following footnote in the press release: “Please be aware that YouTube may change, stop or terminate its services, including livestreaming, at any time without notice. In accordance with YouTube’s ‘Restrictions on livestreaming,’ users must have a minimum of 1,000 channel subscribers in order to livestream from a mobile device (including camera products with livestreaming capability).” Note to potential vlogging stars: read the fine print.

In short, we have complicated matters so much that we are attracting increasingly slimmer niches of the market, smaller and smaller constituencies. Along the way we’re also confusing the buyer, just like we did with the megapixel race; cropping sensors and focal length conversions; connectivity workarounds; and the whole kitchen sink tech approach stuffed into ever-higher–priced cameras.

So, perhaps we should take this time to rethink some of the assumptions that have led us to where we are today. There’s no reason to take the plummet in sales too personally; every business that counts on social interaction and freedom of movement has suffered.

Instead, let’s use the time to get ready for when this horror lifts, so we can recover with a fresh approach that will bring the industry back with vigor, hope and new relevance in the times ahead.