With the flurry of mirrorless and the dearth of DSLR introductions in the past few months, one might rush to judgment and deem the DSLR’s day as done. To paraphrase Mark Twain, perhaps reports of its demise have been greatly exaggerated.

The real story here, folks, is the overall drop in digital camera sales that began in mid 2016, followed by a fairly good holding of the line in 2017. And then there was a drop throughout 2018.

Moreover, if you look at the JCIA stats on camera shipments, two things become apparent. First: in the U.S., DSLRs still outsold mirrorless by a fairly wide margin last year. Second: while overall shipments of DSLRs slipped by almost 20% and mirrorless gained almost as much, volume-wise, mirrorless sales still lag behind DSLR sales. However overall, we are seeing what we never predicted or wanted—a zero sum game.

What happens next is not up to you and me. Camera manufacturers have been involved with a tug of war with technology as well as changing social practices for years. At times they have led the way, while at other times they have played catch-up. The photographic consumer has in great numbers changed the way they take and also share images. The industry faces a real challenge: the smartphone tsunami caused tidal waves that still swamp our shores.

The adage that technology motivates new developments and models has always held true in the photo industry. Think 4K, full-frame sensors, on-chip processing, etc. Given that DSLRs have all this tech and more, they are clearly not obsolete in that regard. They still deliver incredible imaging features as well as quality.

What the upsurge in mirrorless—be it MFT, APS-C or full-frame—and the lack of new DSLRs in the past months tells us is that the twin combo of competition and marketing teamed up to convince consumers to go out and buy the latest thing. If mirrorless sells, then so be it. The gods of competition have no nostalgia, and somehow a reflex mirror was made out to be old hat.

The Rise of a New Format

When mirrorless cameras first came to our attention not long ago, they were considered just another part of the family. We convinced ourselves we should see them as adding to the consumer’s photo-imaging choices. Indeed, a few years back many called for a truce in the mirrorless versus DSLR debate. They believed more options meant more sales and a rising sea of sales would raise all boats.

However, few considered mirrorless would cannibalize DSLR sales, an attitude you hear and a reality we face more and more. I distinctly remember one major company saying they would never get into mirrorless. Well, it’s an object lesson in the old cliché about never saying never. 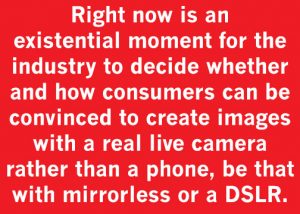 Moreover, we watched closely as the percentage of interchangeable-lens camera sales tilted. At first it seemed mirrorless was a play for camera companies with small market share to get an edge against the Big Two. Then something odd happened. A percentage of buyers, small at first, began to appreciate the charms the smaller form factor offered and switched to mirrorless.

The new format also seemed like a way for CE companies to make a play. Sony started their run at the DSLR with their SLT (single-lens transparent, or translucent) models. Rather than using a mirror assembly to divert light to a pentaprism finder, they split it between a phase-detection AF sensor and an electronic viewfinder.

The “…less” in what we call mirrorless refers to the elimination of the up-and-down mirror action, and the mirror itself, of traditional DSLRs. When technology moved forward again with integrated phase-detection sensors, the revolutionary SLT became an evolutionary footnote. This led to the idea of making cameras with full feature sets “smaller, lighter and quieter,” a pitch that presupposed elimination of the DSLR’s “pentaprism bump” and “mirror thump.”

Back in olden times, 35mm film fit into any 35mm camera; 120 in medium-format cameras, and so forth. When sensors and memory cards replaced film, the differentiator in cameras became the sensor size and the megapixels it delivered.

Models were replaced when larger capacity sensors came into play, when video became a major feature and when “connectivity” became the rage. Framing rates, superfast AF, 4K, high-resolution EVFs, full-frame models and the like brought forth the raft of Mark XX models and upgrades and “breakthroughs” that often made it tough for the consumer to make sense of it all.

Lens development played a major part in the change. So-called third-party lens makers stayed true to DSLRs. They held back and then cautiously put their toes into mirrorless waters. Still, “branded” and third-party lenses were plentiful, and building a lens collection became aspirational for many photographers as they built their DSLR kit.

However, a sea change occurred when Panasonic and Olympus came out with the Micro Four Thirds format, allowing their lenses to cross-pollinate. (True, adapters allowed all sorts of lens/camera combos, but often with mixed results.) You can see the current manifestation of this thinking with the L Alliance, a trio of companies whose camera mounts could take each other’s and third-party optics.

Yet, through it all, the DSLR held the line and manufacturers kept producing cameras for amateurs and pros. New model choices were legion—until now; 2018 saw the floodgates open for mirrorless models with scant DSLRs in sight.

By the end of the year, only one DSLR was announced, and that was a Nikon beginner model. It was smaller, lighter, highly affordable and marketed as a step-up camera for smartphone photographers. I also should mention that Canon recently released its EOS Rebel SL3, another compact, affordable DSLR aimed partly at phoneographers. However, many of those folk seem quite content with their flat, rectangular and pocketable cameras that can also inform them about how to find the nearest Thai restaurant.

While the appeal of DSLRs remains, recent ILC introductions point to continued erosion overall of DSLR cameras in the face of the numerous mirrorless cameras aimed at enthusiasts and pros.

A Pre Postmortem for the DSLR?

Referring back to those camera stats, it might be too soon to lay flowers on the grave of the DSLR, and especially on lens sales for that format. For those who think the DSLR is dead, I have two words: installed base. There are millions of folks who, despite the cheerleading of numerous websites, have yet to dump their trusted cameras, especially those with a big investment in glass. True, one can buy adapters to hold their DSLR glass on many of the new models. However, there are a few caveats.

I have a beautiful and not inexpensive Canon 16–35mm f/2.8 L lens that’s my go-to for great image quality on my Canon DSLR. The drawback, which I fully accept for what the lens delivers, is its size and weight. While I would gain a few ounces in reduced weight and a few inches in smaller body size, should I switch to an R- or RP body and adapter? That lens would still be large and heavy and the combo would take up a hunk of my camera bag.

The second matter is one of my pet peeves about mirrorless—the EVF. There’s no question EVFs have evolved from their often-miserable viewing experience; smearing and lag are pretty much a thing of the past. Yet, to my eyes and those of many diehard DSLRers I know, the intimate and direct connection with what I am framing is better than the TV-type experience of an EVF. Maybe I just can’t make the switch; maybe I’m getting old, but sticking with an optical viewfinder carries strong appeal.

The third consideration is price. While development of lower-priced mirrorless models will continue, switching from a DSLR to mirrorless requires no small investment. Those who must have the latest thing, and who are attracted to the format’s very attractive charms, often face a big price tag to do so. Those pros and enthusiasts with deep pockets may not be put off. However, for the average Joe or Josephine advanced amateur, it can seem daunting.

No doubt the first crop of full-framers are aimed at the former crowd. But if mirrorless is to gain major traction, prices have to come down. While the Canon RP is a good step in this direction, the slide in camera sales might in part be due to sticker shock.

Don’t get me wrong. In the spirit of full disclosure, I have worked with mirrorless cameras that were fun; easy to carry (given a modest lens); and filled with amazing features that open up new and exciting image possibilities.

In addition, the format is bound to grow in popularity as more model options, particularly in APS-C and similarly affordable systems, become available. I am not suggesting we turn back the clock and deny the amazing tech and features the mirrorless format provides.

When digital came out it was the biggest change, and news, in photography for decades. Being close to the action, I saw where I needed to go; I quickly sold all my 35mm and medium-format film cameras while they still commanded a decent price.

However, the change from DSLR to mirrorless is not equivalent to that sea change. It’s an evolution that has spawned new innovations and exciting products. But it still faces the smartphone juggernaut as in-phone imaging becomes even more sophisticated.

Even if the DSLR’s sun is setting, and camera makers decide to place all of their cookies in the mirrorless jar, the industry will still have to figure out how to combat the slippage in sales and find ways to appeal to a larger audience. We have all seen how innovation and creative marketing revived sales in the past.

Photography itself will never go away. It is innate for people to make pictures to have, hold, admire and share. Figuring out how to get folks to work with a real live camera is another problem; one that I trust greater minds than my own will solve.

A Time for Risks

After all, when digital arrived it was a poor cousin to film, and you know what happened there. Perhaps some risk taking is in order, some new paradigm that will turn the tide.

The crux of the matter is not who has the fastest framing rate, who will be the first out with 8K or who will offer the most on-board menus and apps. Right now is an existential moment for the industry to decide whether and how consumers can be convinced to create images with a real live camera rather than a phone, be that with mirrorless or a DSLR. That’s where the marketing muscle has to be flexed.