I found Digital Imaging Reporter’s January 6, 2017 issue most revealing about the photo industry in general and innovations in the imaging world in particular.

Within the issue were well-done articles on drones, VR, 360º cameras and the ongoing pursuit of connectivity. In total, the CES 2017 show issue was indicative of where we’ve come as an industry, how our product base has expanded along with imaging technology and, most importantly, the opportunities and the challenges ahead.

As most of us who’ve been in this industry for more than 10 years well know, the PMA (Photo Marketing Association) convention was once an independent gathering. It was a major event where new cameras, lenses and accessories for all segments, from amateur to pro, were introduced.

When PMA closed its tent, it was folded within CES’s embrace. It became the so-called “PMA@CES.” This was a far cry from when PMA held its own event. However, the ever-increasing floor space fees and ever-decreasing turnout and company dropouts eventually doomed the solo act. 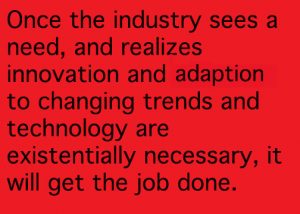 More to the point, the switch from film to digital with concomitant loss of the wholesale finishing and minilab sector (and the cash cow of film processing and printing); the demise of companies like Kodak and Polaroid (now living on as brand names); and the slow decline of independent retailers and photo chain stores all served as body blows to the industry.

This may seem like ancient history. But it serves as a reminder of how resilient the photo industry has been, despite pressures both technological and financial. It also should give a hint as to how flexibility and adaptation may be the keys to a brighter future.

This column is not intended to be a PMA postmortem. This is despite the early warning signs the loss of an independent show may have sent about how the whole structure of the industry was changing.

There’s no question the current business environment—the decimation of the point-and-shoot sector due to smartphones, the year-to-year declines in camera sales—seems to spell real trouble. Yet, as always, adaptation and innovation may lead to a brighter future for the photo industry.

I reserve the right to be part cynic and a bit of a Pollyanna. When digital raised its binary head many thought the game was up, too. While no doubt disruptive, it did spawn a new realm of products and services that, in time, reinvigorated the industry.

Scant photo industry news came out of CES, save a DSLR, a mirrorless, a few point and shoots and lenses here and there. However, “closed door” prototypes were revealed to a press sworn to secrecy with TBD arrivals. So the uninitiated may not see mention of them for some time. But we shouldn’t draw dire conclusions from that. During photokina in September 2016, many new products and initiatives were revealed and are now coming to market.

Many seem aimed at the carriage trade or the pro. However, there was excitement about a breakthrough in large sensor/smaller form cameras that hints about where digital cameras might be heading. This was in the form of new mirrorless medium-format cameras, namely from Hasselblad and Fujifilm.

There was also a host of lenses from about every manufacturer at just about every price point; a parcel of new accessories (including bags that fit drones as well as traditional gear); and inkjet papers and printers that might stir the enthusiast’s artistic bent.

In a sign of what’s to come, there were also three relatively new segments in large evidence. It is a trio that poses both challenges and opportunities for the industry. The challenge is to separate fad from momentum and to be sure that any products are released only after the kinks have been worked out. The opportunity is to understand that photo industry brand names matter and that while venturing into a new line of business can be risky, it can also pay dividends if done right.

360º (and Other Superwide) Cameras

I must admit when I first saw 360º-capable (and superwide at lesser visual circumferences) imaging devices demoed, they struck me as a fad akin to 3D. The effect is impressive technologically speaking yet somewhat disorienting. This is especially true in terms of the ultrawide lens effect that can distort scenes and make even subjects a relatively short distance from the photographer seem very far away.

Making effective images requires a degree of shooting and image processing skill not possessed by a large group of the buying public—those accustomed to a more “normal” point of view.

Yet, there are many applications, from real estate and street reportage to individual sports. And there are ready adherents who see them as a way to share their novel view of the world.

I currently regard some of these cameras as quirky at best, but they are eminently portable and not very expensive. They do appeal to the YouTube-sharing public, especially with apps that provide link to such sites.

Portability is key in a world where so-called “wearable devices” are a clear trend. And where the all-in-one, equally portable smartphone never gets left at home. Here’s a cautionary note. New models seem to come (and go) fairly quickly, as befits a new technology (and the CE product cycle). But the pace of development is fast, and their ease of use and overall image quality are improving.

For me, these unique devices are clearly within the industry’s basket. They could prove a good niche that might somewhat make up for the decline in point and shoots. So far, Kodak, Nikon and Ricoh, among industry stalwarts, have made the plunge.

VR (or Alt-R) could be strictly defined as “imaging,” thus is often tossed, rightly or wrongly, into the photo basket. It requires the consumer of this content to don goggles that project what is called an “immersive” space and to act oddly in real reality as they attempt to master it.

Veteran industry member, commentator and wry observer Bob McKay wrote in his DIR CES piece, Zooming In: “Early experience showed that some users experienced vertigo and/or nausea while using VR viewers . . . because the eyes and inner ear balance were sending conflicting signals to the brain.”

I am sure sophisticated VR technology aimed at training for the military and industry may be far advanced and useful. But it strikes me that the consumer side is not quite ready for prime time. It may require a sharp right turn in human evolutionary development to allow it to gain wider adoption. Does this mean that content creators will spurn VR capture as part of their imaging arsenal? Probably not, although potential creators clearly need new and advanced software skills to get it right.

A search of B&H’s website under “VR” reveals, among industry names, Kodak, Ricoh, Samsung and Sony have VR offerings. Hardly mainstream; I await further developments before I make a judgment call.

Camera-toting drones are “hot” these days. They have been enthusiastically received by a wide variety of end users. These include amateurs and enthusiasts as well as pros working for ad and news agencies. Drones were buzzing all over photokina, CES and even PhotoPlus Expo. All well and good. But one problem for the photo industry is that the recording devices stowed aboard are usually provided by the drone makers and/or dedicated third-party camera makers.

As Ted Kritsonis, in his excellent article in the January 6 DIR titled Pairing Cameras with Drones: A Mounting Problem, points out, coupling non-endemic and undedicated (my phrase, meaning photo industry cameras) imaging devices to drones can pose some daunting issues. He writes: “Assessing whether a drone can or cannot handle another [read non-endemic] camera really comes down to how much it can actually lift . . . it may not take off at all.”

He also notes possible incompatible lines of sight and controller issues. “You might be able to see what the camera is shooting but not be able to control composition, focus or pan to change perspective.” And connectivity: “While it is technically possible to use a dedicated app to control a camera . . . the Wi-Fi Direct connection bridging them may have a limited range.”

And the coup de grace: “. . . in some instances, you may need two mobile devices [in other words, one for the drone and one for the camera] because the controller may require its own connection to the drone’s dedicated app.”

The Potential for the Photo Industry

Thus, while retailers would do well to educate themselves and carry drones as part of their imaging offerings, the adaptability of industry cameras to them is not a given. While pros and commercial users have this figured out, it might be a good idea for camera makers to take a good look at this market and come up with cameras that can be adapted for use in these airships by the enthusiast and amateur market as well. This means testing and even developing apps and dedicated models (that are also “land-based” cameras) to fill this demand.

Right now, the imaging possibilities and growing market for drones is inarguably exciting. However, the drone maker’s dedicated imager may pose an easier solution and present fewer problems than photo industry cameras. This makes the industry’s products less likely to be the end-user’s choice.

There is a market here: as Kritsonis notes, image quality from the typical drone camera “. . . won’t match the quality of a dependable point and shoot.” As to the current situation, he writes: [Consumers] looking for ways to bridge the two together [drones and industry cameras] may find options aren’t as abundant as they probably should be.” Opportunity knocks: education and product development await.

We are all convinced that connectivity in cameras is vital. Yet, we’re still running images through a smartphone to get them where most people want them. We don’t seem able to get around that.

There are, however, a large number of photo enthusiasts who want the best of both worlds. They want image quality for their files and perhaps printing, as well as sharing their images without excessive hassle. Some even enjoy the remote control shooting that a linked camera and smartphone provide. The industry has come up with numerous ways to wirelessly tether camera and phone. These are integral Wi-Fi, NFC, Bluetooth and the latest manifestation, as reported by industry maven Mason Resnick in his excellent summation of the topic in the January 6 DIR, QR codes.

Initial connectivity attempts stumbled and in some ways gave cameras a black eye in this regard. However, I have personally tested Nikon’s SnapBridge and the Leica M app. And I have read reviews of other makers’ offerings. Consequently, I can attest to how far we’ve come in the connectivity game.

This proves to me that once the industry sees a need, and realizes innovation and adaption to changing trends and technology are existentially necessary, it will get the job done.