In the spirit of full disclosure, this column is written from the point of view of somehow who covers the photo beat, and not as a manufacturer or imaging entrepreneur. It’s also written by someone who has attended every photokina since 1984.

I have a deep sentimental attachment to the show and friends made and re-met over the years. I have also grown to love the photo-centric city of Cologne. During photokina, it rolls out the red carpet and celebrates the art and history of photography like no other town.

During those many years, I have seen the show evolve, grow and change 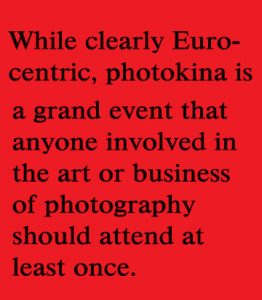 . For Americans at least, the biennial event was always a “must attend.” It linked up the worldwide photo community in a dynamic, business-oriented atmosphere where new products were announced and new technology was introduced. It was charged with the excitement of being a part of a growing and expanding world where photographers and manufacturers from around the planet would converge.

True, there were “public days” at the tail end of the weeklong event where throngs would crowd the halls. But by that time, business was complete and most of the photo industry would be on their flights and trains home. All the American arms of the international industry would attend. And there was, for a U.S.-based reporter at least, a flurry of activity and meetings and press events, with copy being churned throughout the day and into the night.

There were new product presentations. And also tech and business sessions that gave a look ahead and communicated the pulse of the imaging industry—from ye olde days of film to today’s breakneck changes. For many years I worked on the English-language PTN Show Daily, and we always had more news than we could fit.

There is a point where sentimentality ends and business begin. Thus my quandary about the recent shift of the show and my questions about attending. The last few shows saw the character of the event change. And, perhaps more significantly, the importance of attendance for Americans decline. It turned from an international show with profound influence and importance to what became a mainly Euro-centric show, where American reps of the larger companies were rarely to be found.

The public still came, but they were admitted from day one. This did make for a good atmosphere for business. This may sound snobbish, but it also shifted the booth demos and action toward showmanship and displays designed to draw in the public, rather than a concentration on the finer tech points of the products. (In truth, there was always a showbiz element at past photo trade shows. Remember the dancers and gymnasts and card sharks, etc., at the larger booths at the last few non-CES PMA shows?)

To me, however, there became a decided shift away from the mainly business character of the show to one where events and halls were dedicated to catering to the student and enthusiast crowd. Case in point was a carnival atmosphere that included a “slingshot” ride for kids in the alleyway. And there was a mechanical bull ride in the middle of the passageway. Numerous “photo op” setups were offered so the public could make images.

It felt more and more like a consumer-oriented, Euro-zone event where photography was encouraged and celebrated. It seemed like kind of a photo industry event for teenagers, enthusiasts and aspiring image makers. (This is something you see done to good effect at “event” shows like PhotoPlus Expo and WPPI. And it was something PMDA tried a few years back. But it was a decided shift for photokina.)

Changes This Time Around at photokina

I guess there was some grumbling about all that jazz. And the folks at photokina have responded by unveiling a new “Imaging Unlimited” theme. This represents a good direction. In conversations with some folks close to the show, there seems to have been a recognition that a shift away from the midway was in order.

To wit, there now seems to be a clear delineation of product segments: Capture (cameras, lenses, associated gear); Lighting; Input, Editing and Processing (for film and video); Sharing and Storage; and Presentation (printers, prepress, projection, home electronics). This makes good sense and helps visitors navigate to prime areas of their interest, except of course there’s the complication of multi-product manufacturers having to figure out what to put where.

The so-called Action Hall has been moved to the weekend only. This is an event that photokina literature describes as where “photo and video freaks” can try out various sports scenarios with their cameras and fly drones to their hearts’ content. Sounds nice, but count me out.

There will still be “live performances and street art” to attract shutter snapping. But then there is an educational side with a “photokina light art congress” and “community areas” where students and enthusiasts can get demos on all manner of subjects.

The hall plan, when compared with 2014, shows the same amount of space being utilized. While final exhibitor figures are of course not available, I would assume they should be on or close to par with the last gathering.

It will probably remain the place where some new products are first brought out on the world stage. However, the problem for photokina (and indeed all such shows) is that product cycles and intros no longer seem to automatically follow the trade show calendar. Witness the recent CES, where news of “importance,” at least to guys like me, were held to after the show. To “not get buried in the mass of releases,” according to more than a few sources. Or they were released in private meetings prior to the show, with attendant blood oath, non-disclosure agreements.

The problem is, the surprise factor that was always such an important element of photokina has greatly diminished. The Internet, which has disrupted so many ventures and businesses, has also made traveling overseas to scoop news and get the lowdown on coming products much less necessary. New product intros and even “live” press conferences are simultaneously broadcast at the moment of their unveiling. In truth, the “scoop” is a thing of the past. Uniform and massaged new product information becomes immediately available on hundreds of websites as soon as the “embargo” on information is lifted. And manufacturer reps certainly make the rounds here in the U.S. prior to the show to unveil what’s on tap, making their and perhaps retailer attendance much less meaningful.

Having noted all of this, are shows like this relevant anymore? Is reaching the end user at such shows their best use? Has the “event” replaced the trade show as the best use of time, money and effort for the industry? And if so, what does a show organizer with a grand tradition of being the number one worldwide trade show for the industry do?

This can’t be an easy puzzle to solve. You have to give credit to the photokina organizers for wrestling with the issue. I am sure the show will see a good representation of “foreign” visitors. And there will be a wonderful mix of product and process. There also will be a good deal of exceptional photography on exhibit. While clearly Euro-centric, photokina is a grand event that anyone involved in the art or business of photography should attend at least once.

As mentioned, I have a very deep and sentimental attachment to all that photokina was. And in part still is. It is an energizing experience for anyone in the imaging industry. It is a unique show in all that it and the host city offers. The organizers do their utmost to accommodate the visitor, and just walking around the show is a treat. In all, it is still one of the most interesting and diverse and largest imaging shows in the world. It sure beats CES in its dedication to the photo industry, by a mile.