More than one pro I know doesn’t carry around a camera anymore. This, of course, doesn’t apply when they’re on the job. But it does when they are on everyday walks, at family events and at social gatherings. If you ask, “Where’s your camera?” pros smile sheepishly and pull iPhones from their hip pockets. Does this mean we’re reaching a tipping point in the status of real live cameras?

Despite exploding batteries, small sensors, indefinite viewing when shooting in sunlight and a comparatively woeful lack of resolution—not to mention the tracking and hacking phones are prone to—the erosion of the once lofty status of the real live camera continues.

More troubling, perhaps, is that this holds especially true for many “amateurs” and even enthusiasts, the bread and butter of our industry. We can’t dismiss this by thinking these folks don’t love making images, given the billions that swamp the Internet. The vast majority of them are made with a phone. And whether we agree or not, these folks are quite serious about their photography and see it as an essential part of their lives. There are phone camera artists who create credible and even incredible images using their eyes and instincts and a host of apps that allow them to visualize their imagination and edit and share them with ease. So, we don’t lack photographers out there.

What we lack is any option to the amazing all-in-one functionality, portability and, perhaps most important, the ability to post images without having to transfer them from one device (the real live camera) to another (the phone). Let’s face it, the solutions thus far have been complicated, cumbersome and, in some cases, downright unreliable. Yes, just about any camera worth its salt can make images the phone cannot match. But the landscape has changed, and in the process the iPhone and its ilk have changed photographic habits. In large part, cameraphone makers have seized the ground and the attention of consumers once held by cameras.

The “Death of Technique”?

One other thing has changed: the death of technique. I don’t mean iPhoners make nothing but casual, poorly executed snapshots; instead, real live cameras have become ever more complicated. When film (and the print) was king, the minilab revolutionized the ease with which consumers could see and share their images. One-hour labs popped up in every supermarket and on every street corner, and you could see your vacation snaps while still on vacation. Today, all those machines slumber in some desolate landfill and access to images has become instantaneous—a result of the digitization of photography. What followed, in a social context, was the explosive growth of instant sharing. For that, the iPhone breed is particularly well suited. 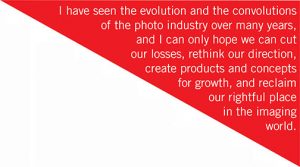 The death of technique did not come from having program or auto modes available on DSLRs, despite what some critics say. But it was certainly accelerated by the simplicity of making an image with a phone. Case in point: the writer of a recent article on cbsnews.com stated, when comparing the iPhone 7 to Google’s latest offering, “My phone is my primary lens and, like many other people, I care most about camera quality when upgrading my phone.” Yikes.

And when photo writers delve into technique, they make it so convoluted they become tongue-tied; they get deep into arcane information that is in some way forced by how complicated cameras have become. I recently read an article on depth of field that appeared in one of our leading consumer photo mags, and it even confused me—and I know a bit about the subject. The writer suggested that readers download hyperfocal distance scales from the Internet and refer to them so they can get the depth of field they want. He hints at using narrower apertures to increase depth of field but warns about the dangers of diffraction that delving into apertures narrower than f/11 pose. Show that article to an iPhoner you’re trying to step up and they will run the other way.

I don’t anticipate real live cameras will disappear. But looking back, predictions that film and digital would make for a happy marriage didn’t quite pan out. Nor do I anticipate that pros and well-heeled enthusiasts will abandon their cameras for iPhones, at least not entirely. But it is unquestionable that iPhones and their like will be the tool used to make an ever-increasing proportion of images, both still and video. One thing is clear: the change is and will be generational. I showed a recent middle range DSLR to one of the grandkids and went over the benefits and specs. She looked at me like I was crazy. “Why go to all that bother?” she asked, holding up her iPhone and smiling.

One indicator of the loss of ground is the cratering of sales in the compact camera arena. This is one category you would figure had the greatest potential for cutting into the ever-growing cameraphone numbers. Yet, according to CIPA (Japan Camera Industry stats): in 2016, exports of non-interchangeable lens cameras (through August) to the Americas (they don’t break out U.S. sales) were slightly below 50% from last year. There may be a bit of throwing in the towel on the part of manufacturers here. They might just be cutting back on production due to decreased demand.

The picture is brighter, though not brilliant, when you check the interchangeable-lens camera stats. Those numbers are close to 80%, year to year thus far—bleeding, yes, but not arterial. Not bad, you’d say, but if you chart the shipments back two years, you’ll see a woeful drop overall.

On the other hand, so-called smartphones, according to industry stats, will be in the hands of more than 60% of the U.S. population by 2017. It is estimated there will be in excess of 220 million smartphones in this land. I’m not saying this is a zero-sum game and every smartphone sale means one less for the camera industry. But look at the compact camera numbers and some conclusions must be drawn.

There’s no question that the territory once solely occupied by the photo industry has radically changed. This leads to some serious questions and soul-searching for us all. Will the camera industry continue to cede photographic ground to the iPhone? How can we readjust to the shifting imaging habits of the consumer and enthusiast alike? Just how long can camera companies hold out in this declining sales environment? At the end of the day, who will be left to carry on the good fight?

Then again, you never know. Perhaps the industry will come up with some new tech that will upend what has been a steady decline; or perhaps we will all be making and sharing images in ways none of us can imagine. Perhaps, perhaps . . . When silver halide had its last gleaming, as Bob Schwalberg so aptly put it, it didn’t necessarily mean the sun was setting on the photo industry. We bounced back and digital photography became the rallying cry. It resulted in amazing ways to make, create and share images, admittedly in fits and starts, but we got there.

Right now the ground is shifting beneath our feet. Ever the optimist, I have seen the evolution and the convolutions of the photo industry over many years, and I can only hope we can cut our losses, rethink our direction, create products and concepts for growth, and reclaim our rightful place in the imaging world.