There’s no question that 2018 saw a turning point in camera build and technology, with EVF models making a run at DSLR dominance.

Thanks to faster processing engines and higher res monitors, the electronic viewfinder offers greatly enhanced clarity and efficiency. Moreover, the curse of smearing and slow refresh rates in earlier EVF manifestations has been, for the most part, lifted.

These models, which are called “mirrorless,” an odd appellation that has stuck, are also smaller in hand and lighter in weight. They are thusly more appealing to pro and enthusiast alike. This holds truer for DSLR “pro” models than it does for the DSLR enthusiast and “starter” bodies that are now more compact and lightweight than ever.

True, EVF models have risen in proportion to overall sales. However, DSLRs still hold sway in the numbers sold, at least for now and in the U.S., given that two majors, Nikon and Canon, are just out of the EVF full-frame gate.

There’s now less uncertainty about the recovered health of the camera industry. The big skid has halted and in some cases reversed (except, of course, among certain low to middle range compacts, being collateral damage in the smartphone wars). So, the question going forward is just how big a market share EVF models will snare. And also, pertinent to manufacturers, how big will be the demand for their particular offering in the increasingly crowded full-frame format arena.

What was once a one-horse Sony show is now a more crowded pack. Not only, of course, are Nikon and Canon in the race, but more models from the “L” mount alliance of Panasonic, Sigma and Leica are anticipated to debut soon. Indeed, CES 2019 will provide more clues as to when that might be. 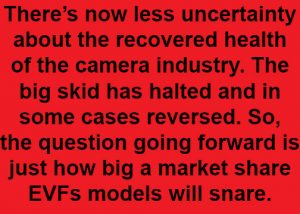 Though at this column’s deadline there are no specific announcements in that regard, the new Canon and Nikon full-frame models were there for the crowds to handle at this fall’s PhotoPlus Expo in New York. Being the larger booths at the front of the hall, Nikon, Canon and Sony were cheek to jowl.

Notably, from this observer’s viewpoint, attendees shuttled to and fro to get their hands on the new models. And while the Panasonic “S” cameras were still under glass, a company spokesman told me they’d be arriving “real soon.”

Just as occurred with DSLRs, one of the interesting aspects of the new full-frame models (referred to hereafter as FFM, for “full-frame mirrorless”) is how some companies have developed two distinct models right out of the gate.

Both models, in the case of Nikon and the promised Panasonic FFMs, share many attractive attributes. However, one of the main differentiators, reflected in both price and intended audience, is the pixel count. For example, Panasonic’s S1R boasts 47MP while its sister camera, the S1, offers half that. In addition, Nikon’s Z 6 and Z 7 show similar spec variances. Canon, as of yet, has one FFM on offer, but that may change sooner than later.

Megapixel packing has some implications, namely low-light performance and the ultimate image file size, giving buyers a choice depending on intended use. There is some temptation to class the lower count sensor cameras as “enthusiast” and the higher as “pro” models. But it isn’t as cut and dry as that. Price may be the ultimate determinant in which model appeals to a specific segment. However, among aspiring pros and enthusiasts, the “higher the megapixel count the better” attitude still holds a good deal of sway.

Yet, another differentiator in the coming EVF model class from the majors might be a smaller sensor. This would certainly help drive prices down, thus broaden the market, especially since no new APS-C DSLR models, at least until now, have been announced. Sony has done quite well, thank you, in this regard. I can’t help but think that others will follow suit. Indeed, the success of Sony and how their models cut into interchangeable-lens camera sales across the board is what inspired this sea change in the first place.

Whatever models appear at CES, or later in February at the Japan Camera Show, we’re going to see a major battle ahead for the hearts and minds of camera buyers.

Then there are integral-lens full-frame and smaller sensor premium and midrange models; so-called bridge cameras that get wider focal length ranges with each generation, especially on the tele end. And, of course, there are the latest “super format” (previously called medium format) models that have come closer in price to high-end pro DSLRs and EVFs than ever before.

Competition is healthy and drives innovation. But there will undoubtedly be some separation of wheat and chaff as all this plays out.

The Need for Speed

When discussing imminent camera releases, one matter that always crops up is the settling of what’s colloquially called its “firmware” prior to release to the public. Over the years, we’ve seen cameras become, in large part, programmable computers with lenses.

At times, this interplay works just fine out of the gate. However, judging from the fairly constant “firmware updates” issued by manufacturers (indeed, one well-known camera testing website posts a regular “Firmware Friday” list), some models are released that need later tweaking in the programming.

Mainly, it’s to fix some fairly obscure parameter setting deep in the menu that few notice in their daily work. And the fixes eliminate any need for a recall, although there are rare instances when that has occurred. (In fact, lens makers are not immune to this as the “conversations” between lens and camera has increased.)

The result of all these internal clockworks is that when a new model comes out, it often does so with a new processing engine. That engine was developed specifically to handle the heavy load it must carry. The days when shooting at high frame rates caused buffers to stall are mostly over. But some models do balk more than expected when fed panoramas, long-exposure time and especially high frame rate stills and long take (or 4K) video.

As data feed bulk increases, the spinning wheel, familiar to those doing large file image processing on an older computer, has to turn much faster. Indeed, photographers, who want to capture image after image in rapid fashion, naturally expect their three-grand-plus camera to follow along.

The memory card has to follow suit, too. This has led to rapid advances in the development of higher capacity (for those big files) and faster read/write SD and CF cards, as well as new configurations like XQD, to do the job. As I write this, there are even newer, faster and more efficient cards on the horizon.

“May You Live in Interesting Times”

The above quote is an old Chinese proverb that is both a blessing and a curse. There’s been an invigoration of the camera industry after the doldrums of the last number of years. That’s good, even great, and certainly interesting. No doubt, it’s a heyday for the industry, in the sense of the “bumper crop” mentality. Innovation and advances sparked by competition are leading the way.

My only concern, and this is the curse side of the equation, is that with so many choices, the consumer may be ill equipped for the rapidity of change and hold back until the dust settles.

In the end it will be, hopefully, a fascinating voyage for them as well. Perhaps it will all settle down a bit by the end of this season’s cycle of shows. By that time, we may be able to take a breather and start to get a better picture of how it will turn out. I am quite sure that it will only be a brief respite from what may follow. Interesting times, indeed.