You know there’s a strong bond between a father and son when the father insists his son, at 11 years old, should pay for his own Green Bay Packers tickets out of his paper route money.

“At $6 per ticket, it was a little more affordable back then. But it certainly taught me a lesson about responsibility,” said Tony Miresse, reflecting on his father’s early influences. 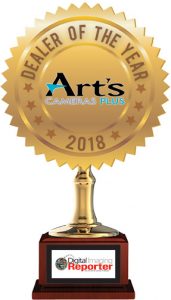 Art’s Cameras Plus began as part of a discount store in 1967. Art Miresse had entered into an agreement with an appliance dealer to start a camera department. Art didn’t know much about cameras, but he understood margin. Moreover, he saw a way to make some money for this bosses.

“He was new at it,” said Tony. “So he called in camera reps from the area and basically gave them a choice. He said, ‘I’m starting this department from scratch. You can have your way with me on this order, because I’m not sure what I’m doing. Or, we can start a long-term partnership that just might work out for the both of us.’”

Well, 51 years later, I guess it worked out.

Art continued to run the business with his partners. However, given their relationship, the owners gave him the opportunity to buy them out over time and run the store as its own entity, called Art’s Thrifty Camera. Eventually, Art moved it out of the discount store, and Art’s Cameras Plus was born.

Art worked many hours, while raising five sons and a daughter. Even though Tony was the youngest son, he showed the strongest interest in being a part of the business.

“I had a paper route since I was 11, and sometimes dad would bring me in the store and give me odd jobs to do,” said Tony. “Right after I turned 16, I knew I wanted to work there. So I’d start riding my bike seven miles to work or hitchhike, until I got my driver’s license.”

Art Miresse was already in his sixties when Tony was in his early twenties. And Art saw something in Tony that indicated he was a natural for the business. “I’d be standing in the office when reps were in and I’d start to give my input. My dad started stepping out of the way. ‘Why don’t you meet with these guys,’ he would say.”

Tony started controlling inventory better, forming relationships with vendors and getting ad money. Sometimes he’d also fight with his dad to broaden the selection in the store. “At one time, Art was super loyal to Yashica, and we sold a ton for a while. But then I told my dad it wasn’t what people were asking for anymore.”

Tony Miresse proved to be a natural salesman and businessman. In addition, he felt blessed that his father was willing to relinquish the business to him. It proved to be a wise decision.

“My parents were good friends with Ray and Evelyn Murphy, of Murphy’s Camera. At the time, my dad was still coming into the store five days a week. However, while they were away on a vacation together, Ray said to my dad, ‘Art, what the hell are you doing still busting your chops? Don’t you trust Tony?’

“That’s all it took. My dad came back from that trip and immediately cut back to three days a week. It was like a lightbulb went off,” said Tony.

The rest is history. Tony has now been running Art’s Cameras Plus for almost 40 years. He has found ways to survive in sometimes difficult environments. In fact, in 1979 there were 33 camera storefronts in Milwaukee and southeastern Wisconsin. Now, however, there are only three.

Art’s Cameras Plus certainly faced challenges, and they had to learn how to adapt. According to Tony, one of the best decisions he ever made was to join the PRO Group.

“A large part of it is earning better margins with ProMaster products,” said Tony. “We built the brand in our market from zero to a known, well-respected product line. But even more important is the idea sharing at our conventions. Being able to sit with the smartest minds in the industry who are all survivors is so educational.

“I always come back with ideas that have already worked for other people in the same industry. In some cases, there are concepts that need to be tweaked to fit into our store or into our market. But it really has been a strong lifeline for our success,” Tony added.

Over the years, Tony has expanded Art’s education programs to meet the needs of his customers. Classes and shooting events are a strong revenue generator in their own right. “We used to just give free classes with the sale of a camera,” said Tony. “Now people are interested in deeper dives into photography. So we have an education department and offer more than 25 different classes. We also have Art’s Cameras FOCUS Group. It’s a dedicated camera club that has grown to more than 2,000 people. We offer monthly photos shoots to give our customers a great experience with their equipment.”

Building the Legacy of Art’s Cameras Plus

Art’s Cameras Plus is still a family business, but now the family is the people in the store who have worked there for years. “My dad passed away in 2012 at the ripe age of 90,” said Tony. “I’d call him on my drive home three or four nights a week. He was always interested in the business, although he was amazed that someone would spend $2,500 for a lens!

“My wife, Geneen, also works behind the scenes. She was a big help with store layouts and remodeling projects, as we continually keep our stores looking fresh. But it looks like my two kids will be following different paths. Instead, I hope one day to work something out with the people who have been loyal to me for so long to keep Art’s Cameras Plus going for years to come.”

Art Miresse would certainly be proud of the legacy Tony continues to build. We congratulate Tony and his team for being named our 2018 Dealer of the Year.

By the way, they still have those Green Bay Packers tickets today. And Tony is still paying for them.