There’s a great twist to the story of the Seims and Service Photo.

Burke Seim’s grandfather, Bill, was not happy at the camera store where he worked. So, he decided to open a camera store right across the street. It set him back so much that he couldn’t afford a sign. However, he had the words “Service” and “Photo” from an existing sign. Thus, Service Photo was born in 1948.

Burke’s dad (also Bill) went into the business around 1961. Although he wasn’t sure it was the right move, he was a terrific salesman. In fact, he expanded into three stores, which he held until the early 1990s.

Enter Burke Seim. (Also Bill, but it got way too confusing and his mom insisted on using his middle name!) Burke had no intention of going into the family business. He was a finance major with stocks and bonds in his future. But, lo and behold, he went to work for his dad. After one day, he decided that dad was doing most things wrong and  he could do it better.

Burke told his dad that either he could sell him one of his three stores or he would start his own store and compete with him. (Grandpa Bill would be proud!) Burke bought one of the stores from his dad, taking a page from his grandfather’s playbook.

Bill ran the other two stores for another few years. When it came time to sell them, he asked Burke to buy them. Burke politely declined, and Bill sold them off. Finally, Baltimore was once again a “one-Seim” retail operation.

This bit of family history (and rivalry) is the cornerstone of Burke’s competitiveness and confidence. However, he never really competed with his dad. Burke’s Service Photo appealed to the commercial and professional markets, versus his dad’s photo retail/photofinishing approach.

Early on, Burke saw the potential of a retail operation catering to commercial and government entities, as well as professional photographers. With that model, he built Service Photo into an incredibly successful enterprise.

The Virtues of Owning a Retail Business

When I asked Burke what he loved about the business, his answers were wide and true. “When you’re a retail owner, it’s easier to figure out what you don’t like. I do like the fact that for 30 years I could shave twice a week and wear jeans or shorts to work.”

He also really likes being in control of a business where you can see results every day. “In this business, I can see tangible results with professional photographers. We have such a diverse customer base; I’ve learned so much from them.”

In addition, Burke extolls the virtues of owning a retail business. “A retail business owner sees a lot of things others don’t get to see. We talk to different people every day. While customers and employees can make our hair gray, they are what we like the most.”

Burke also tends to take everything personally. “A bad Google review is not a good day. The sense of accomplishment does it for me. I’ve helped a lot of people further their passion for photography. That’s what I love about this business.” 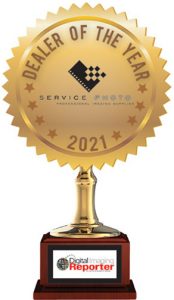 Of course, this year had its own unique challenges. “Nobody was really prepared for the turmoil that came with Covid—the lack of supplies, vendor issues. It was a struggle for many, business-wise as well as emotionally. But I’ve talked to many owners, and at the end of the month, the numbers seem to add up.

“When vendors and retailers are facing these challenges together, it feels like those with good, solid relationships with vendors through the years have weathered the storm a bit better.”

Given Burke’s family history, I asked him if other Seims might enter the fray. It doesn’t appear so. His two daughters have other careers in mind, and he’s okay with that. “Honestly, I’ve tried to keep them out. It takes a certain kind of person who loves to work all the time. You really have to be in the store, ready to go, every single day.”

It appears there’s no place Burke would rather be.