As we move into 2017, there’s clearly a certain mirrorless momentum taking shape in the interchangeable-lens camera market.

While DSLRs are still leading unit sales in the category, it’s clear that mirrorless cameras are beginning to nip at the heels of the perennial leader. I thought it would be helpful to hear from the leading manufacturers as to why they think this is happening—and what’s ahead for this exciting technology.

First, let’s get a sense of what is currently driving purchase decisions when consumers are faced with the DSLR versus mirrorless conundrum.

According to InfoTrends’ 2016 U.S. Interchangeable-Lens Camera Market Study: Consumer Imaging Behaviors and Industry Trends, those who considered purchasing a DSLR but chose a mirrorless camera cited size and expense as the top reasons for their choice. Almost 50% said the DSLR was too big; 36% said it was not as lightweight as they wanted, and 24% said the camera body was too expensive. Additionally, 16% said lenses were too expensive. 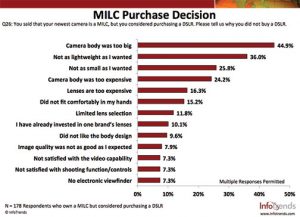 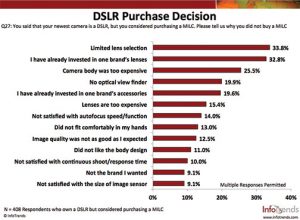 So why would a consumer still choose a DSLR over a mirrorless camera? Of those in the study who bought DSLRs, one-third responded that lens selection and already being committed to a lens system were the reasons for their purchase. Lack of an optical viewfinder was cited by 19%. Interestingly, image quality was much further down as a reason to stick with DSLRs. 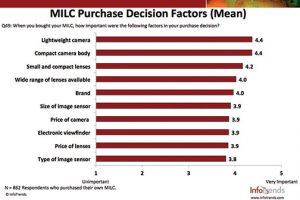 “If you talk to people coming into the system, smaller and lighter is an added benefit,” said Neal Manowitz, vice president of Sales and Marketing for Sony’s Digital Camera Division.

“There are lots of different reasons to buy different products. Our challenge is to provide the best experience for that shooter, whatever the technology happens to be. But photographers are certainly recognizing the image quality in our mirrorless products, and it’s that technology that is now driving the market.”

Darin Pepple, senior consumer marketing manager, Imaging, Panasonic Consumer Electronics Company, agrees. “Enthusiasts understand what you can do by removing the mirror in a DSLR.

Video capture is improved without a mirror lockup; and they’re able to use the power of digital processing to improve focus speed and tracking speed. You can also see what you get with filters before you take the picture. It’s becoming a better experience for photographers.”

So where is the growth in the mirrorless segment? It’s interesting to examine the target market for mirrorless among the major manufacturers.

“When we introduced the X100 in 2011, our camera did not have interchangeable lenses. Then we moved to the XPro1 in 2012 and started to expand our lens selection. Today, we have 22 lenses and can now expand our market from strictly pros to advanced amateurs.”

“The educated photo enthusiast cares less and less about the mirror,” said Julien Sauvagnargues, president of the Consumer Products Group at Olympus America.

“The relevant question is about performance of the products. We should consider the whole ILC category rather than speaking of mirrorless versus traditional DSLRs. We believe that Olympus growth and the ILC market growth are driven by innovation. The performance of our products has increased at a dramatic pace and it is now surpassing that of traditional DSLRs. As long as we continue to innovate, we will continue to gain market share.”

So does size really matter? The research seems to support the fact that it does, but manufacturers are much more impressed with the technological advancements.

“If you ask existing mirrorless customers, their original motivation was smaller and lighter,” said Manowitz. “But if you talk to people coming into the system now, they’re moving to mirrorless to capture a better image. But small is a great bonus.”

“People choosing to purchase Olympus cameras and lenses understand they can have outstanding image quality and autofocus speed for a fraction of the weight and the size of the alternative,” explained Sauvagnargues. “This provides them the freedom to shoot pictures in every condition and environment.”

“It’s an easy explanation to start with size and weight reduction,” said Pepple. “But when you quickly go into the technology advantages over a traditional DSLR—like sensor technology, processing power and the advantages of using touch screens to change focus points—it becomes an easier sell. Portability becomes a bonus.”

What about Lens Selection?

One of the most prevalent reasons for not buying mirrorless in the past was lens selection. But according to InfoTrends’ study, only 11% of respondents mentioned the lack of lens selection for not considering a mirrorless camera. It’s clear the proliferation of lens availability has taken away another barrier to mirrorless sales.  And it’s not just the availability of focal lengths but also the improvements in lens quality and compatibility.

“DSLRs offer lots of lenses; many are part of their heritage from the past,” said Igarashi. “Mirrorless lenses, on the other hand, are fairly new. Because they are all designed recently, they utilize the combination of the sensor and the lens to deliver the best image quality. The newer mirrorless lenses also incorporate technology that recognizes that megapixels and resolution will increase and there will be a need to resolve higher megapixels in the future. So rather than carrying the burdens of heritage, these new lenses are also built for future technologies.”

“Olympus is an optical company, and therefore the quality of our lenses is one of the most important factors,” said Sauvagnargues. “The amount of technology that goes into the lenses is incredible and clearly a defining factor in choosing our brand.”

The U.S. market is finally seeing the growth in the mirrorless segment that eluded it in the past. Asia and Japan were quicker to adopt the technology for a number of reasons. And the earthquake in Japan last year certainly slowed momentum in the category. But market share for mirrorless is hovering around 20% in the U.S., and many are bullish on its near-term growth. The question is when mirrorless might surpass DSLR market share.

“People are understanding more of what mirrorless is—that’s the big difference,” said Igarashi. “Originally people thought bigger was better, but consumers are intelligent and they know the benefits and the improved technology now. So I think we’ll see it continue to grow. I think mirrorless can overtake DSLRs by 2020. But who knows? It might even be next year!”

“There’s an incredible amount of momentum right now, and we’re very bullish,” said Manowitz. “We’re going to see a lot of growth over the next 12 to 36 months, driven by the same trends. Advancements in technology are not slowing down but rather are speeding up. We see it in the development of our sensor technology. This category clearly is in high gear right now, and Sony is benefiting from the enthusiasm in the market.”

“While DSLRs outsell mirrorless as a whole, it’s become a more accelerated curve of mirrorless taking over DSLRs,” explained Pepple. “We certainly are developing new sensor technology all the time to reduce the internal infrastructure of a mirrorless camera for the future. As for processing power, we’ve done a lot to improve speed. We’re also looking at ways to not only meet but also surpass DSLR focusing speeds and tracking speeds. In addition, we are looking to utilize the power of 4K and pushing toward 8K in the future to utilize video technology, which is at the core of what Panasonic brings to the table.”

“I am very optimistic for the mirrorless market, as long as we continue to innovate and to listen to the needs of our customers,” said Sauvagnargues. “We continuously challenge ourselves and find new technologies to better fulfill the needs of our customers. Our mirrorless technology is the result of Olympus’s commitment to increase customer satisfaction. I am confident this technology will allow us to continue to improve our products in the coming years.”

After speaking to these leading manufacturers, I’ve come to my own conclusions:

•    Size does matter, but not as much as it used to.
•    Manufacturers are focusing on image quality to level the playing field in the interchangeable-lens market, and it seems to be working.
•    Lens selection is no longer a deterrent to buying a mirrorless camera, as manufacturers have expanded their lens offerings to satisfy the market.
•    DSLRs continue to be the first choice among professionals and advanced enthusiasts, but there may be room for mirrorless cameras in a pro’s camera bag.

The battle of the DSLR versus the mirrorless interchangeable-lens camera will continue. And this will only help the overall imaging category. But the momentum behind the mirrorless category will certainly be a continuing story in 2017 and beyond.