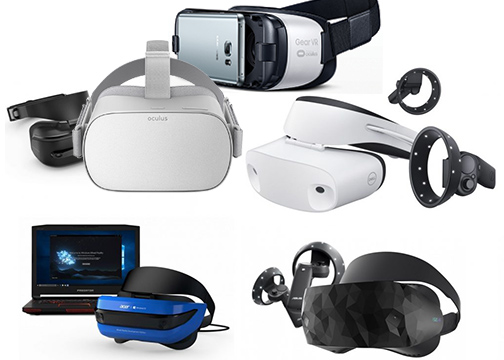 Framingham, MA—Overall spending on augmented reality and virtual reality (AR/VR) is forecast by IDC to reach $17.8 billion globally in 2018. This represents an increase of nearly 95% over the $9.1 billion International Data Corporation (IDC) asserts was spent in 2017. Moreover, on a geographic basis, the United States will be the region with the largest AR/VR spending total in 2018. Spending will reach $6.4 billion, according to IDC.

In addition, the research firm found that the worldwide proliferation of VR/AR headsets is expected to grow as shipments reach 59.2 million in 2021—up from 9.6 million in 2017, according to IDC’s Worldwide Quarterly Augmented and Virtual Reality Headset Tracker.

To date, this market has been spurred by low-cost, screenless VR viewers, such as the Samsung Gear VR. However, IDC anticipates this category will lose share as players in this category scale back on their smartphone plus headset bundles and shift focus toward tethered and stand-alone solutions.

As a result, VR screenless viewers will account for 14.8% of the entire market in 2021, down from 58.8% in 2017, according to IDC’s tracker. Furthermore, over the course of the next few years, IDC believes tethered headsets from companies such as Sony and Meta will account for the majority of shipments, and in 2021 stand-alone headsets like the Oculus Go or Hololens will account for almost half of the AR/VR headset market. 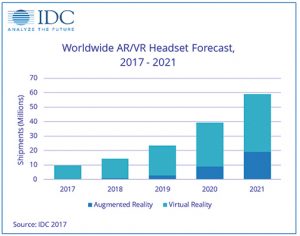 “The VR market, young as it is, is in the midst of a crucial transition as buyers are gravitating towards tethered headset and PC or game console bundles that offer advanced tracking and higher fidelity rather than settling for low-cost headset and smartphone bundles,” said Jitesh Ubrani, senior research analyst for IDC’s Mobile Device Trackers. “This bodes well for the entire VR ecosystem as the improved experience of a dedicated device draws a more dedicated audience.”

In addition, Ubrani asserts that traction for VR tethered and stand-alone VR headsets will not be limited to the consumer market. Commercial shipments for these headsets are also expected to climb from 1 million in 2017 to 12.6 million by the end of 2021. Meanwhile, augmented reality headsets are on track to have a significantly larger impact in the commercial segment; shipments are forecast to grow to 15.6 million in the same time period.

“We have long believed that AR headsets will play a fundamental role in changing the way many companies do business in the near future and we are increasingly seeing the commercial use cases for VR unfold,” added Ryan Reith, program vice president with IDC’s Worldwide Quarterly Mobile Device Trackers.

“AR will introduce technology to a large portion of the workforce that was never able to benefit from technological advances. This was because of the need to use their hands to complete their job functionality. AR will change all that. And within VR, the commercial use cases that are emerging the fastest are within education, design/content creation, and retail. And we have strong reason to believe this is just the tip of the iceberg.”

Source: IDC Worldwide Quarterly AR and VR Headset Tracker, December 19, 2017
Table Notes: * The table represents forecast shipments of virtual reality and augmented reality headsets only. Any additional software, services or computer devices (e.g. PC, game console, smartphone, etc.) are excluded.
*Shipments of simplistic headsets that do not have any technology built in are excluded. Examples of such headsets include Google Cardboard and other Cardboard-like devices.

In addition, IDC issued an update to its Worldwide Semiannual Augmented and Virtual Reality Spending Guide.

The update shows spending on AR/VR products and services overall will grow at a CAGR of 98.8% throughout the 2017–2021 forecast period.

“Virtual reality will continue to drive greater levels of spending in the next 12–18 months. Both consumer and commercial use cases will gain traction. There is currently a huge appetite from companies that see tremendous potential in the technology. They range from product design to retail sales to employee training,” said Tom Mainelli, program vice president, Devices and AR/VR, IDC.

“Meanwhile, the augmented reality market will deliver more modest levels of spending near term with mobile AR on smartphones and tablets likely to garner the most attention from consumers, while head-mounted displays will primarily sell into commercial use cases.”

The research firm believes the consumer sector will remain the largest source of spending for AR/VR products and services, with spending this year expected to reach $6.8 billion on a worldwide basis.

The study also found that the largest of the commercial sectors in 2018 will be distribution and services ($4.1 billion). This will be followed by the retail, transportation and professional services industries.

The second largest sector will be manufacturing and resources ($3.2 billion). There will be balanced spending across the process manufacturing, construction and discrete manufacturing industries. Retail will be the industry with the largest AR/VR spending in 2018. idc.com