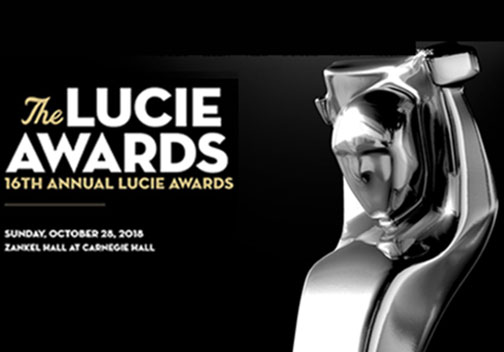 Los Angeles, CA—The 16th Lucie Awards gala will be held in New York City. The event will celebrate photography with a stellar lineup of honorees. It will also introduce a new award: the Lucie Impact Award. The red carpet gala ceremony will be held at New York’s renowned Zankel Hall in Carnegie Hall, on Sunday, October 28, 2018.

Furthermore, the Lucie Foundation, along with its advisory board, announced an impressive list of nine honorees for 2018.

Following are the individuals who will be honored this year, as well as the award they will receive.

“As we celebrate our 16th Lucie Awards, we also have the opportunity to honor several of the world’s most deserving, and talented photographers,” remarked Lauren Wendle, president, Lucie Foundation. “This year we spotlight the Camera Club of the Philippines, the first of its kind in that region with an impressive history.

“Moreover, we are excited to announce a new award category, the Lucie Impact Award. It acknowledges the impact of a photograph or a body of work in a given year. This year, John Moore will be the recipient of the inaugural 2018 Lucie Impact Award for his work on the immigration crisis. And in particular for the incredible image of the crying girl, which became a symbol of the human cost of the United States immigration policy.”

Susan Baraz, cochair added: “We are privileged to honor exceptional icons in our photo community at the Lucie Awards gala on October 28. As photography itself is metamorphosing due to technical input, digital work, Instagram, etc., these outstanding honorees provide a touchstone to an art that remains in its pure, unadulterated form. Moreover, the Lucies is our reminder of the passion we hold for the still image in a now, very un-stilled, present.”

In addition, the Lucie Awards honors the year’s best photographic achievements of the industry by presenting seven support category awards. The support awards acknowledge the individuals and institutions that play a critical role in the crafting and promoting of images.

The Lucie Awards is the signature program of the Lucie Foundation.

Tickets are available at lucies.org.