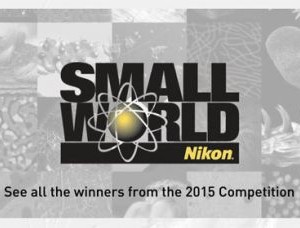 Melville, NY—Nikon Instruments Inc. brings the world eye to eye with a honey bee, awarding first place in the annual Nikon Small World Photomicrography Competition to Australian Ralph Grimm. His incredible, 120x close-up of a bee eye covered in dandelion pollen grains is not only visually striking but brings to light just how little is understood about how these insects see the world.

Nikon recognized nearly 80 other winners of the 2015 Small World contest, including a ranked Top Twenty, 12 honorable mentions and 56 images of distinction. With more than 2,000 submissions spanning 83 countries, judges selected winners that displayed not only artistic quality but also exceptional scientific technique.

“Each year we are blown away by the incredible quality and quantity of microscopic images submitted from all over the world, from scientists, artists and photomicrographers of all levels and backgrounds. This year was certainly no exception,” said Eric Flem, Communications Manager, Nikon Instruments. “Judges had their work cut out for them in narrowing down from such a rich pool of applicants, and we are so pleased with the results. Each of these winning images exhibits the exemplary technique, scientific discipline and artistry for which Nikon Small World is known.”

Judges were particularly impressed by the masterful technique Grimm employed to capture his image stack, which included over four hours of careful work to mount the eye, set the focus increments, properly illuminate the subject and avoid peripheral smudging during the stacking process.

The story behind the image is also touching. As a high school teacher, self-taught photomicrographer and former beekeeper, the subject matter is dear to Grimm’s heart. While bee colonies continue to dwindle worldwide, Grimm hopes his image can serve as a voice for this rapidly disappearing insect that plays such a critical function in pollinating the world’s crops.

“In a way I feel as though this gives us a glimpse of the world through the eye of a bee,” said Grimm. “It’s a subject of great sculptural beauty but also a warning that we should stay connected to our planet, listen to the little creatures like bees and find a way to protect the earth that we all call home.”

Top images from the 2015 Nikon Small World contest will be exhibited in a full-color calendar and through a national museum tour. To view them online, visit nikonsmallworld.com.

In related news, for the first time Nikon will unveil the winners of its sister competition, Nikon Small World in Motion. Celebrating and showcasing the best of science and art under the microscope in the form of video, the 2015 Small World in Motion winners will be revealed on December 2, 2015 on nikonsmallworld.com.