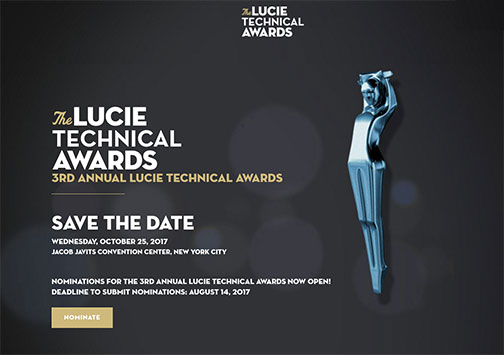 Los Angeles, CA—The 3rd Lucie Technical Awards, an initiative of the Lucie Foundation and also the sister-program of the Lucie Awards, will take place in New York City on October 25, 2017.

The ceremony will occur during PhotoPlus International Conference + Expo, at the Jacob Javits Convention Center. This addition to the Lucie Awards embraces a large and also critical segment of the photographic community.

In addition, the 15th Annual Lucie Awards will follow, on Sunday, October 29, at Zankel Hall at Carnegie Hall in New York City.

The Lucie Technical Awards aim to honor the large and small companies as well as the individuals who have advanced the photographic industry in a particular year. All-inclusive, the awards encompass cameras, lenses, lighting and accessories, as well as printers and software.

“Once again we gather to embrace an ever-growing segment of our beloved photographic community by highlighting those whose passion for the technological mingles seamlessly with brilliantly talented image makers,” commented the founder of the Lucie Technical Awards, Hossein Farmani. “Many of them we’ll showcase just a few days later at the Lucie Awards.”

Experts in the field of photography and also members of the public can contribute to the nomination process. The goal is to recognize as well as reward deserving companies and individuals whose efforts have advanced the careers of image makers.

Nominations are free and are open until August 14, 2017.  To nominate, visit http://tech.lucies.org/nominate. Ticket availability for the Lucie Technical Awards will be announced shortly.