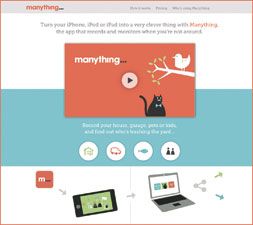 Manything turns iPhones, iPods or iPads into video-monitoring cameras with live feeds, unlimited recording and motion detection. The free app automatically streams video and stills to the Manything cloud over Wi-Fi. It also includes handy features like movement and sound detection, sound-activated flash, clip editing and sharing, and the ability to watch live video from other smartphones. The app is available for download from the UK App Store and will soon be available for U.S. consumers. The service is launching with free storage for up to 24 hours of recording.

Manything has a variety of applications, such as home security, wildlife watching, pet cam and baby cam. “We built this for people who want to monitor stuff but don’t want the hassle and expense of buying special equipment. Manything uses the camera you already own and takes seconds to install. The result is an instant video-monitoring solution that, thanks to our ability to run on battery and switch between Wi-Fi and cellular networks, is more powerful and resilient than your average CCTV system,” Manything cofounder James West said.

Retired smartphones are about to become a big opportunity as people move onto their second or third devices. For example, iPhone 3GS devices will not be upgradeable to Apple's new iOS 7 this fall, meaning that many of these highly capable devices with great connectivity and cameras will be left at the back of a drawer. While West accepts that not everyone has a spare device in their drawer, he points out “the numbers of smart devices out there are so massive that even after you’ve taken out all the people who sell their old devices on eBay, there’s still a large number left lying around not doing anything.

“There are plenty of apps that let you send video straight to the cloud (Vine, Viddy, Bambuser, etc.),” added West, “but Manything represents a completely new category—to stream and record video continuously, to survive network and power outages, to detect motion and sound, and easily create clips of the highlights to share.”

Manything brings together a team of entrepreneurs with a history of spotting future technology trends. Mike Fischer, cofounder of RM, brought computing to schools; James West, cofounder of Alamy, helped revolutionize the stock photography industry by creating the first open, unedited collection of images; Tim Pearson, also a former CEO of RM, is current chairman of Updata Infrastructure (a Times TechTrack100 company). They are joined on the board by Dan Germain, creative director of Innocent Drinks. Alamy is a 30% shareholder in Manything. manything.com