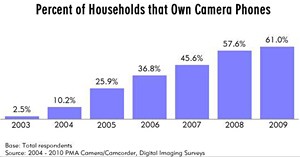 Jackson, MI—According to the 2010 PMA U.S. Camera/Camcorder Digital Imaging Survey, nearly two-thirds (61 percent) of U.S. households now own a cameraphone. In comparison, in 2008 58 percent of households owned at least one cameraphone and in 2007 that figure was 46 percent.

The study also reveals that 12 percent of U.S. households own three or more cameraphones, with a whopping 85 percent of owners saying they used their device to take pictures in 2009. The majority of households said the cameraphones they used were in the 2-to-3.9 megapixel range.

According to PMA Market Research, respondents cited a variety of reasons for why they used a cameraphone rather than another camera for picture taking. A majority, 59 percent, stated they did not have a digital/film camera at the time they wanted to take a photo, attesting to the ubiquitous cameraphone as a ready solution for spontaneous picture taking. Forty-three percent of cameraphone owners take pictures with the phone so they can have the picture with them at all times, and 38 percent responded they just wanted to try the camera function for fun. Other reasons for using the cameraphone rather than a conventional camera: the desire to send or upload the photo quickly; the occasion was not important enough to bring a regular camera; the picture taker did not own a digital camera; and the cameraphone is their primary camera.