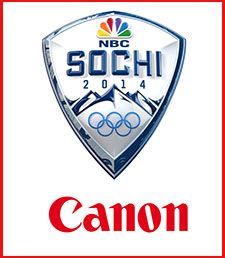 Melville, NY—Canon USA was selected to provide HDTV portable, field and studio lenses to NBC Olympics, a division of the NBC Sports Group, during its presentation of the 2014 Olympic Winter Games in Sochi, Russia, from February 6–23.

“Canon is honored to once again be chosen by NBC Olympics as its lens provider,” said Larry Thorpe. “Canon has supplied NBC with lenses for its Olympics coverage since 1992. A wide variety of Canon’s most advanced field, studio and portable HD lenses will be used by NBC Olympics to capture the action at the many winter sports venues in Sochi. A complete team of Canon service professionals will also be on-hand with NBC in Russia to ensure a positive production experience.”

“Canon has been our lens partner for over 20 years now. In all those years, they have never delivered anything but superb optics and service for all of our Olympic coverage,” added David Mazza. “Regardless of the conditions—including bad weather, temperature extremes and fast-paced productions—Canon lenses always produce amazing pictures. We have grown to rely on their outstanding on-site support and they are a critical member of our team.”

In addition, as they were in New Jersey to support professionals photographers covering the Super Bowl, a Canon Professional Services (CPS) team is on-site in Sochi to provide photographers and broadcasters with access to support personnel, equipment maintenance and product loans throughout the month of February. usa.canon.com