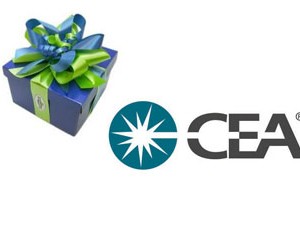 Arlington, VA—For the upcoming holiday season, consumer spending on electronics gifts is projected to reach historic highs, despite a forecasted decline in total gift spending, according to the Consumer Electronics Association (CEA).

CEA’s 17th Annual CE Holiday Purchase Patterns Study, released at the CEA Industry Forum in San Francisco, a four-day conference designed to inform and connect leaders in the CE industry, reveals “Consumer electronics will once again be the ‘hottest’ gifts, both to give and to receive, this holiday season.”

Study results indicate that consumers will spend $750 on presents, down 2 percent from 2009, but they will spend approximately $232 on CE gifts, which represents a 5 percent increase from last year and the highest level since CEA began tracking holiday spending.

“Giving electronics as a holiday gift, either to a loved one or to yourself, is more popular than ever,” said Steve Koenig, CEA’s director of industry analysis. “Not only are three in four adults planning to give CE as a gift this year, but more consumers want electronics as a gift for themselves, demonstrating that electronics will be the must-have gifts of the season.”

Four of the top ten items on adults overall holiday wish list are electronics, reports the CEA, with laptop computers and the iPad ranking at the top of tangible gifts, behind only peace and happiness. Among adults’ holiday CE wish lists, digital cameras placed a strong sixth, above big screen TVs and computers.

“Many innovative products new to the market are high on the gift list this year,” said Koenig. “Consumers want the newest technologies, and stores that stock these products on their shelves will fare well this holiday season.”

Overall, consumers will each spend an average of $1,412 this holiday on everything from gifts and decorations to travel and food—a rise of 3 percent from 2009 but still below recent levels as consumers remain guarded due to the economy.

“While the recession officially ended a year and half ago, consumers remain very cautious this holiday,” said Shawn DuBravac, CEA’s chief economist and director of research. “Worries remain over the economy and employment picture, but there is optimism. Consumers will spend more this holiday than last, with one in five planning to increase their holiday budget compared to last year.”