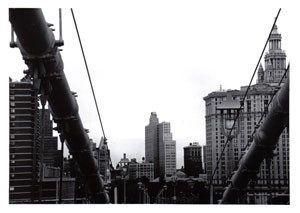 The Real New York photo contest invites photographers to submit examples of their work that capture the essence of the city that never sleeps, and the urban core of the metropolis that goes beyond tourist hotspots. The submitted photographs should illustrate iconic images that speak to what the real New York is. Contest photos will appear on datacolor.com/therealnewyork, where visitors can view the images. Online voting, open to the public, takes place now until July 24, 2010.

“There is no better place to launch the Real New York photo contest than at New York’s premier photo festival,” said Christoph Gamper, vice president, Consumer Business, Datacolor, who will serve as a member on the 2010 New York Photo Awards jury. “NYPH shares in our mission to offer young artists the opportunity to have their talent recognized and we are happy to support this cause as a sponsor of this year’s festival.”

The grand prize winner will be awarded a trip to the photokina trade show, taking place September 21-26, 2010 in Cologne, Germany. First and second runners-up will receive a Lensbaby Composer and a $250 B&H gift card, respectively.

There is a limit of 10 entries per submitter, and pictures submitted must be original and the property of the photographer. The contest is open to any person 18 years or older residing in the U.S. All entries must be received by July 24, 2010. To enter or view contest submissions, visit datacolor.com/therealnewyork.