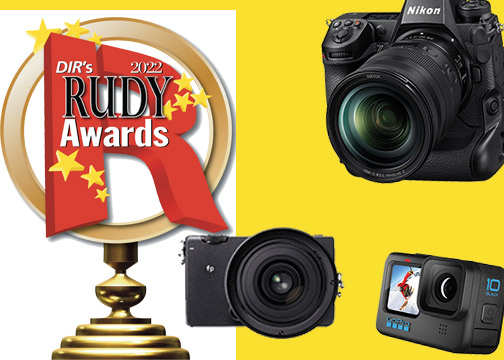 In 2022, DIR celebrates 30 years as the photo-imaging industry’s business publication. This year, more than ever, we are reflecting back to our beginnings—and our founders. Established in 1992 by Rudolf Maschke and Ed Wagner as Photo Industry Reporter, our publication—like the industry it covers—continues to evolve.

However, what hasn’t changed is our mission to engage our readers with signature features, Like DIR’s coveted Rudy Awards. This is the sixteenth time we have awarded them in the name of our late cofounder, the Great Maschke, as he called himself!

Rudy was an unforgettable character who pioneered photo-imaging trade publishing. With a keen eye, he always had his finger on the pulse of the industry he loved, instantly recognizing breakthrough technologies.

In 2021, despite the ongoing pandemic, our industry continued to advance. It introduced devices to meet new imaging needs and enhance the ingenuity of content creators. Our editors got together virtually to discuss the products that grabbed our attention. Here, in the spirit of our cofounder, are the 16th Rudy Awards. From pro mirrorless to analog film cameras as well as gear to make vlogging and livestreaming easier, the products are presented in no particular order.

Starting off with a heavy hitter, Nikon’s most advanced, full-frame Z ILC is its first mirrorless flagship. A 45.7MP, stacked BSI CMOS sensor and Expeed 7 processor 10x faster than the Z 7II’s achieve fast bursts with full AF/AE. The Z 9 shoots 20-fps RAW images with a 1000+ buffer! Need a balance of quality and burst rate? It captures full-res JPEGs at 30 fps. Conversely, a high-speed frame capture+ function enables 120-fps shooting with AF/AE at a manageable 11MP. And its ISO range expands from 32 to 102,400. Plus, starlight mode lets it focus down to -8.5 EV.

What’s more, the lens zooms from 150mm to 500mm by rotating the zoom ring through an arc of just 75°—less than a quarter turn. This allows rapid adjustment with minimal movement.

Other benefits include BBAR-G2 coating that minimizes ghosting/flare; an Arca-Swiss-type tripod mount; flex zoom lock; moisture resistance; a fluorine coating; and compatibility with camera-specific functions, such as eye AF. $1,399.

Sigma calls the fp L the world’s smallest, lightest 61MP, full-frame mirrorless camera. We call it remarkable. It has a larger sensor; improved autofocus with contrast- and phase-detection AF; and USB power capability. Its optional companion is the EVF-11 electronic viewfinder. But the camera works with various electronic or optical viewfinders.

Making it adaptable for photographers and videographers, Sigma leaned on three concepts. 1. Pocketable with a full-frame sensor. 2. Scalable. 3. Seamless with modes changeable at the flip of a switch.

Its 61MP, BSI 35mm Bayer sensor has a low-pass filter to achieve high definition and rich color. The Foveon sensor legacy was behind the decision to use an LFP to reduce moiré.

Moreover, the high pixel count means images can stand extreme zooming or cropping. A crop zoom feature works in still and cine modes. And photographers can pinch to zoom on the LCD touchscreen.

The lens features a beautifully engineered, folded optical design, with separate left and right optical systems. Ergo, it captures stereoscopic 3D imagery with a 190° field of view to a single full-frame sensor. Creators can add a new dimension to their stories—going from still or video shooting to stereoscopic 3D with a lens swap!

Part of Canon’s EOS VR system, the lens works with the EOS R5 camera that’s capable of 8K 30p video and Canon VR software. Its immersive 3D content is viewable on head-mount displays like the Oculus Quest 2. Viewers take in the scene with a wide field of view by moving their heads.

Pairing just one lens to an R5 provides the ability to deliver a single file. Remarkable compared to traditional VR systems that capture 3D scenes with two fisheye lenses and record to two separate cameras or sensors that write two files. With the RF5.2mm, users save time behind the camera and in postproduction by eliminating multi-camera positioning, multi-lens syncing, image stitching, audio syncing and encoding.

Let’s take a leap back from VR to analog capture! The tiniest member of Polaroid’s portfolio, the Go measures 4.1×3.3×2.4 inches and weighs 8.5 ounces. A wearable creative companion, it’s a mini version of the traditional, square-format film camera.

In a classic white colorway, it continues Polaroid’s iconic design heritage. However, it’s a new format instant camera for a new generation. It features a new selfie mirror; a self-timer; a longer-lasting battery; and double exposure mode. And it pairs with travel-friendly accessories.

With shutter speeds of 1/125–30 seconds, the analog camera employs a 34mm-equivalent f/12–52 lens and an automatic flash.

On its launch in 2021, Ignacio Germade, Polaroid’s chief design officer, had this to say: “We spent years designing the Go camera from the inside out. The camera’s internal components are arranged like a 3D Tetris. We used a careful composition to achieve a simple, effortless exterior and deliver the smallest size instant analog camera possible. Bringing product design back in a serious way to Polaroid is a labor of love.”

Ricoh’s flagship APS-C DSLR boasts enhanced functions and performance. Weather-resistant, it employs a 25.7MP BSI CMOS sensor and an AA (antialiasing)-filter-free design that reduces moiré to the same level as an optical AA filter. The simulator has on/off and level selections.

Another highlight is Pentax’s Real-time Scene Analysis system with AI that detects a subject’s face/eyes for real-time analysis of movement. Further, SR II Shake Reduction supplies 5-axis, 5.5-shutter-step shake compensation even with a telephoto lens or shooting in low light without flash. And its SAFOX 13 phase-matching AF module has 101 focus sensors (25 cross-type sensors in the middle) and focuses as low as -4 EV.

The first Alpha ILC specifically for video creators and vloggers, the ZV-E10 combines the Sony ZV-1’s video-centricity with E-mount lenses. It livestreams and acts as a webcam without an external adapter plus supports USB camera standards, like UVC (USB Video Class)/UAC (USB Audio Class).

Plus, IS with active mode stabilizes handheld video creation while walking. For easy operation, a one-touch top button changes between still/movie/slow and quick modes. And a tally light provides at-a-glance status.

It was designed to solve challenges faced by streamers and creators, including light quality, harsh shadows and eye fatigue from hours of streaming. The light’s frameless diffuser wraps creators in a soft, flattering light for a professional look. Whether shooting a YouTube video, streaming on Twitch or taking a video call, it helps ensure users look great.

What’s more, livestreamers can fine-tune their look using five presets for brightness and color temperature; options range from warm candlelight to cool blue. Settings are accessed by controls on its back or via Logitech G HUB software.

With G HUB, streamers can create light presets for different scenes. Further, they can assign those presets to G Keys on a Logitech G keyboard or mouse to change their look midstream. Creators can also control all their streaming gear, including Blue Yeti mics, with one desktop app.

What’s more, the Hero10 is cloud connected; when plugged in to charge, it automatically uploads captured footage to a GoPro cloud account. Other upgrades are a front color display with higher frame rates for smoother live preview and a more responsive rear touch-zoom display.

Want to add a creative twinkle to photographs? The Hoya Sparkle 4x filter converts a light source into a 4-pointed star; the 6x filter transforms it into a 6-pointed star. A multi-coating process and etching pattern considerably limit the size of their patterns versus traditional star filters.

Traditional cross filters tend to lengthen light beams, which can lead to overloaded imagery. The moderation of the beams is what makes the Sparkle cross-effect filters unique, and the star points they produce are more natural looking.

Like all star filters, they soften contrast in images, like soft diffusion filters. They also affect the whole image, making them a diffusion option even when pinpoint light sources aren’t present.

In the absence of strong light sources, the Sparkle filters create a dreamy atmosphere—especially pleasing in portrait and landscape photography. Users can strengthen the effect by increasing the focal length toward the telephoto end. Additionally, Sparkle filters are more sensitive to very small light sources like stars, making them a choice for astrophotographers seeking a different look.

A rotating frame lets users control the direction or angle of the points emanating from light sources. The knurling on the filters’ frames makes it easy to attach and remove them. Plus, their matte black finish minimizes reflections and ghosting, while thin frames reduce vignetting even with wide-angle lenses. From 49mm to 82mm, $44–$82.

This distinctive mirrorless camera combines the cinema quality of the Lumix S1H with a box-style profile. And it uses Panasonic Lumix S lenses!

Its 24.2MP, full-frame CMOS sensor boasts a 6,024×4,016 resolution and an optical low-pass filter to suppress moiré and false color. It works with Dual Native ISO technology and a Venus engine, achieving ISO 51,200 sensitivity.

The BS1H outputs 12-bit RAW video over HDMI to save Apple ProRes RAW or Blackmagic RAW. On top of all that, it features HLG recording; VFR for over-cranked/under-cranked C4K/4K video; HFR with sound/AF; livestreaming over wired LAN; USB 3.1 Type-C; 3G-SDI (BNC) and HDMI Type-A terminals for simultaneous output; Wi-Fi; Bluetooth; tally lamps; and a 3.5 audio jack. $3,499.99.

The most comprehensive update to Mavic drones in three years, this vastly improved, iconic DJI folding camera drone was redesigned from tip to tail!

It boasts a Hasselblad camera plus a hybrid zoom camera with a 162mm lens featuring 28x zoom (digital + optical) and an f/4.4 aperture. DJI also upped the omnidirectional obstacle sensors to a 665-foot range, and the drone’s batteries now provide 46 minutes of flight.

The L2D-20c aerial camera embeds a professional Four Thirds CMOS sensor with a 24mm AF lens. It processes 5.1K video at 50 fps with heightened sensitivity and generous cropping, as well as 4K/120p video for better slow-motion footage. And it shoots 20MP images in 12-bit RAW.

Moreover, the omnidirectional APAS 5.0 system has six fisheye vision sensors and two wide-angle sensors that continuously sense obstacles. Plus, ActiveTrack 5.0 now allows the drone to move forward, backward, left, right and diagonally with the subject and around it.