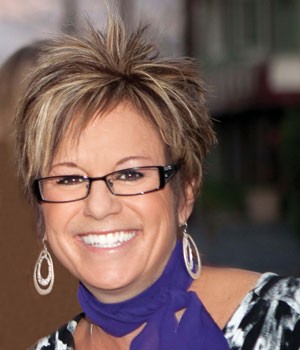 In a tough economic market, the typical business instinct is to pull back, cut expenses, don’t do anything drastic, sit tight and wait till it all blows over. But what if after it “all blows over” you find your customers have left you and aren’t likely to come back? You may be sitting tight for a long time.

Not the type of person to sit still for anything, Gaby Mullinax, who was just elected vice president of PMA, owns Fullerton Photographic, located near Anaheim, California. This energetic photo retailer, whose colleagues often wonder if she ever sleeps, is bursting with ideas from the moment she wakes up to the time she goes to bed. (And rest assured, she does sleep at some point . . . I think.)

“I pretty much come up with a product a day and my staff can’t keep up with it,” she says.

Some of Mullinax’s ideas, especially those designed to attract female clientele, have already become well known in the photo retail industry. Yes, Mullinax is the one who has wooed the archetypal “Jennifer” soccer mom into her store by offering such customer appreciation events as Girls Night Out. She’s also designed her store to be more female friendly with soft-color walls, inviting displays and a comfortable printing area called the Click Café.

While those concepts have been a success and turned this former, but still practicing, professional photographer into one of the bright lights in the retail industry, what’s next? For Mullinax, who admittedly had no idea what she was doing when she bought Fullerton Photo over 10 years ago, an open mind has been one of her best assets.

“When I bought this business in December 1999, I didn’t know that after Christmas all of my business was going to be gone for the year. So I sat there going: ‘OK. What do I do now?’” she recalls. “Back then, digital was nipping at my heels but this was a successful film lab. I didn’t have a specific course of action. And really and truthfully that was a good thing.”

Though Mullinax didn’t know much about photo retail, she knew a lot about marketing—her major in college—which helped her gear the store to a more diverse audience. Now she’s ready to tweak Fullerton Photo’s image again, and it all starts with an extensive remodeling.

“Some would say it’s not a good time to remodel but I think it’s the best time. And my goal is to inspire our customers so that anybody who walks into the store will know immediately our vision of what they can do with their images.”

To do that, Mullinax needed more space. First she explored moving Fullerton Photo to a larger warehouse-type building, but she ended up staying put when her landlord, anxious to keep her around, offered rent credits to help pay for the renovation. Mullinax immediately signed a five-year lease with an option for a five-year extension.

The tricky part was figuring out how to get more space out of the current location, which was formerly a house. In the end, she decided to move the heavy equipment out of the store and into her photography studio, and then switched her studio to her old darkroom. That seemingly small change freed up 300 feet of floor space. Along with giving her more room, the remodeling is helping Mullinax reassess her entire business.

“It’s made me take a look at every bit of this operation from our phone lines to what equipment needs to be where. And we’re becoming a much more efficient operation. We went from one person having a specific job to grow to where everybody had to do everything. Now I realize that became a distraction, because I’d have my best Photoshop person getting up in the middle of the creation of a
holiday card to provide more needed customer service.”

Another change is that the store will be giving up its trademark colorful walls in favor of something more neutral to better display Fullerton Photo’s services. “We don’t have to be defined by the color of our walls anymore. We know who we are. We’re moving into showing off the innovative creative products we can create.”

And true to her style, Mullinax is coming up with more creative ways to print photos every day. One new idea, which popped into her head while she was swimming, involves printing words and images onto sheer, see-through fabric. At first, Mullinax imagined the fabric being used as a unique display material. But while cutting the fabric, she accidentally sliced off a long rectangular piece and realized it would make a beautiful scarf with images on one side and text on another.

“Now not only do I have display panels, I have scarves. We haven’t even begun to scratch the surface in the textile category. The possibilities are ridiculous.”

“Ridiculous” is a word Mullinax uses often to convey a sense of excitement at the possibilities available to photo retail right now. But when asked how she felt about PMA being in her backyard, she dropped it with a touch of nervousness. “It’s ridiculous,” she said. “I’m on the same boulevard as the PMA hotels and the convention center is one block from there. People were calling me up and saying ‘I’m gonna book my flight depending on when I can come and see your store.’

“Seriously though,” she added. “I hope people can come in and find something that can help enhance their business.”

“What’s Working in …” features a photo specialty retailer who is doing something to set him or herselfapart from the competition. If you know someone who has an idea they’d like to share, please send an e-mail to danhavlik@gmail.com.