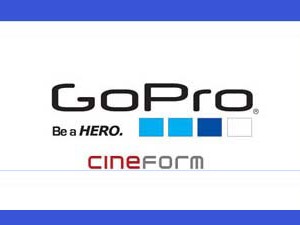 Half Moon Bay, CA—GoPro, maker of wearable and gear-mountable camera equipment, acquired CineForm, Inc., a developer of video compression and workflow technology for the professional film and TV industry.

“We’re extremely excited to welcome the CineForm team to GoPro,” said Nicholas Woodman, GoPro’s founder and CEO. “CineForm is an industry leader in video codec technology and is famous in professional circles for their HD and 3D content creation tools. As GoPro is focused on making it easy for consumers to capture professional quality content, we’re eager to incorporate CineForm’s technology and passion into future GoPro products.”

CineForm is known for its CineForm 444 codec, a professional editing codec that makes HD and 3D editing faster and more convenient without sacrificing image quality. It has produced several award-winning editing applications that exploit the functionality of the CineForm 444 codec, all of which are compatible with industry-leading editing programs, including Adobe Premiere Pro, Apple Final Cut Pro, Avid Media Composer and Sony Vegas, as well as Apple iMovie and Windows Movie Maker. Moving forward, the codec will be named “GoPro CineForm” to emphasize GoPro’s commitment to developing professional content capture and editing solutions.

“Numerous Hollywood feature films, including the runaway Oscar winner Slumdog Millionaire, were captured with CineForm’s codec and edited with their software tools,” added Woodman. “GoPro is in constant pursuit of image quality and CineForm represents a terrific step for us.”

The first new GoPro product to incorporate CineForm’s technology is the soon to be released 3D Hero system, an expansion accessory for GoPro’s 1080p HD Hero line of cameras. The system allows consumers to combine two 1080p HD Heros into a single housing to capture synchronized 3D photos and video. A synchronization cable joins the cameras via an expansion port on the back of each camera.

“It’s exciting to look out and see how many people, consumers and professionals alike, are using GoPro cameras to create compelling content,” said David Taylor, cofounder and CEO of CineForm. “[T]he more we learned about GoPro’s vision, the more we realized how complementary GoPro and CineForm are to each other. We’re thrilled to join GoPro and to help usher in a new era of accessible professional content capture and creation.”

Based in Solana Beach, California, CineForm will become a division of GoPro and will join offices with GoPro’s existing staff in San Diego. gopro.com and cineform.com