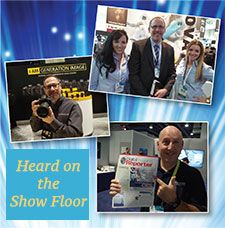 Each year at the International CES, DIR’s intrepid Jason Schneider travels the show floor gathering feedback from dealers and retailers in attendance. Herewith are some of the impressions he culled at this year’s show.

Desmond Kolean-Burley
Manager, Camera Mall,
Ann Arbor, Michigan
Camera Mall is an independent group of five photo specialty stores, all located in Michigan, with branches in Muskegon, Grand Rapids, Lansing, Treverse City and the newest store in Ann Arbor. The Traverse City and Ann Arbor stores serve a well-educated upscale clientele. The demographic of the Grand Rapids and Lansing stores is middle to upper middle class, and the Muskegon store, the first in the Camera Mall group, is located in a mostly middle class area.

Although there is common ownership and what amounts to a buying consortium, each store is run independently and makes its own decisions. “Most of our customers are soccer moms and dads,” notes Desmond Kolean-Burley, “though we do have a number of enthusiasts and pros, and people moving up from cell phones and point and shoots. This year there seems to be a heavy emphasis on 4K video, and we’re predicting that 2015 will prove to be a banner year for mirrorless cameras, with Sony coming on as a strong competitor to Olympus in this category.”

“Here at the Tiffen booth, we just took a look at the Steadicam Solo, which looks like an interesting and useful product we might want to sell,” chimed in Bryan Groothuis of the Grand Rapids store. “Desmond and I will probably bring a few of them into our rental departments to see how well they’re received. We’re also impressed with the universal mount for the Steadicam Smoothee that will allow users to mount practically any smartphone on that popular compact image stabilization device. We hope they bring it to market soon.”

“Unique mobile products are definitely an important part of out product mix,” continued Kolean-Burley. “We sell a lot of remote releases, mini tripods and clip-on lenses for smartphones. We also do a lot of photofinishing and make an amazing number of prints from cell phone images. The quality can be outstanding; I have an 11×14 of a lighthouse shot on a stormy day hanging in my living room, and nobody would ever suspect I shot it with a cell phone, the only camera I had with me at the time. Printing out images taken on cell phones and tablets is an overarching trend, and the average customer shoots more pictures on cell phones than they do with cameras. Retailers should embrace and enable this trend rather than trying to fight it.

“We also sell ‘real’ cameras,” he continued. “We are primarily Nikon dealers and that’s why we’re very interested in looking at the new Nikon D5500, which is smaller and lighter than the D5300 and has an articulated touch-screen LCD. We also do very well with the Nikon D710 and the Sony Alpha a58 and a77 II. We sold out of Sony a6000s, a phenomenal camera for the money, and we also sell a lot of used lenses with adapters.

“We’re very bullish on 2015 and that’s why we’ve opened a new store,” concluded Kolean-Burley. “But we know you can’t just continue with business as usual, and that’s why we’re at CES to check out new revenue streams, products and services. We see opportunity out there, but we know you’ve got to work to make it happen.”

Matt Sweetwood quipped, “This is the wear it, drive it, live it show. It highlights products that basically fall into three distinct categories: what you can attach to your body; what you can use in your car; and what you can use in your home. The CEO of Sony gave a speech exulting at the prospect that imaging devices will be installed in all new cars. This is part of a trend that can be described as the merging of everyday life into technology and vice versa. Practically every major company has a wearable device, and cameras are also being connected—not only with Wi-Fi and NFC but also with Internet monitoring.

“In terms of strictly photographic products, I was very impressed with Nikon’s new ultracompact, ultralightweight 300mm f/4 lens,” continued Sweetwood. “It’s stunning, beautifully constructed and is 1.5 pounds lighter than the previous model—a perfect complement to the downsized Nikon D5500 DSLR that’s pretty much the same size as a high-end mirrorless interchangeable-lens camera. Olympus has the T860, a rugged, waterproof, active lifestyle camera that tracks your position, connects to an app and shows you a map of your journey.

“Compared to the shows of 10 years ago where you bought an object that did something, like a TV or computer, this time it’s all about users connecting to the product, interfacing by wearing it or via wireless communication,” noted Sweetwood. “All new cameras have Wi-Fi and NFC as standard features, and the new challenge is ergonomic—making cameras smaller.

“Going forward I predict that 75 cents of every dollar spent on a camera is going to be for a Nikon or a Canon, and that’s why I’m not one of those people predicting that mirrorless cameras will supplant DSLRs. Lots of DSLRs will be sold in 2015, and I think each type has its place. In any event, DSLRs are getting smaller, witness the Canon SL1 and the new Nikon D5500. On the other hand, the Panasonic Lumix GH4 is about the same size as a DSLR.

“In any case, I think Unique Photo is going to have a good year in 2015 with a small increase in business based on present trends, even though for the industry as a whole sales will be down a bit. That’s because mobile devices will still continue to be a drain on the camera business. I do not think camera manufacturers overall have done a good enough job in communicating to consumers that you need a camera if you expect to capture images that really do justice to the meaningful moments in your life.”

Tod Wolf, Operations Manager
Robi’s Camera Center
Lakewood, Washington
Robi’s Camera Center, Labs & Custom Framing is a 3,000-square-foot, single-location store in Lakewood, Washington, a small city with a population of 58,000 located in between Seattle and Olympia. Tod Wolf describes his store’s focus as “moving toward serving whole families rather than just aimed at moms,” a demographic shift he attributes to “the increasingly portable nature of DSLRs.” He characterizes his customers as 60% “just regular folks,” 35% “photo enthusiasts” and the remaining 5% as “pros and emerging pros.”

“The most exciting thing I saw at the show was actually under NDA, so I can’t be specific,” said Wolf, “but I can tell you it’s a product aimed at enthusiasts and it’s likely to be a precursor to an exciting technological evolution that will come later. I can also tell you that I am personally hoping for a movement away from the ‘big two’ camera makers, some strength and versatility from other manufacturers, and that this NDA concept is in line with that trend.

“Speaking of evolution, I was happy to see the Domke line of camera bags evolve into the Next Generation and move up in terms of both tech specs and ergonomics. We really favor made-in USA products, and Domke’s Next Gen Metro messenger bag is a good example of what we can do in this country.

“We’re also excited about the possibilities of drones, and we have to figure out how to integrate this vibrant category into our store and monetize it. We also see an emerging trend, especially among photo specialty dealers, of upgrading the customers’ photographic experience by moving them into better equipment—a refreshing change after six years of cameraphone dominance.

“The big companies have to get with the program and focus on what camera mom and dad are going to use now, and how to pass their passion on to the next generation if they expect to have a viable future. Today’s youth don’t care much about the heritage or history of photographic products; they’re focused on the experience. Sony, Olympus and Panasonic combined have only about 12% of the camera market, so there’s lots of upside potential.

“2015 is shaping up as a good year for our store,” added Wolf, “so long as the initial trends continue and people are replacing their digital cameras at a fairly brisk rate. It’s all about attracting new customers and retaining your old ones, not so much about new tech or increasing margins per se. It’s about attracting new market segments—sports enthusiasts, mom’s groups, non-photo art students, etc.—while maintaining your existing customer base.

“We also see a growth trend in 360º cameras like the Ricoh Theta, where the technology is finally catching up to the promise. I think it’s significant that Kodak has introduced a moderately priced sports camera in this category. In our area, we also sell a lot of ruggedized, waterproof cameras like the Ricoh WGs, and we were impressed with the new waterproof case from OpTech, which is made in the USA, as well as entries from Manfrotto and ProMaster. We saw a slight sales spike in December, and we sure hope that marks the start of a yearlong trend.”

“From a photographic standpoint, CES 2015 seemed a bit of a nonstarter overall,” said Horan. “That’s likely due, in part, to the difficulty of smaller manufacturers and distributors, those who provide profitable products to dealers, to avoid getting lost in the fray. It’s hard to make a meaningful presence among billion- or nearly-billion-dollar companies unless you’re one yourself or on the way to becoming one. And, though the major camera and hard goods manufacturers like Sony and Canon could afford a sizable presence, even they got a bit swallowed up by the sizable electronics distributors’ displays.

“This seems to be a transition year as far as cameras are concerned,” continued Horan. “There weren’t many new camera models as in years past, where new models were held back for a major launch. There was really no new earthshaking technology either. The only exception is the looming “Wi-Fi in everything” trend since nobody wants wires anymore and cell phone technology has set the bar for convenience and connectivity. Another trend seems to be an increasing market for 360º cameras with both Ricoh and Kodak showing new models. And drones, drones and more drones! Not much to be said there that we don’t already know, except that the time is ripe for prices to drop dramatically.

“True, Nikon announced the D5500, one of the few ‘traditional cameras’ introduced. It’s a nice camera that’s more compact then the D5300 thanks to monocoque construction and a natural evolution in that range of equipment—a good feature mix and enhanced Wi-Fi.

“Canon’s Connect Station CS100 will be available in April,” noted Horan. “It’s a 1-terabyte, network-storage device that the company says can help you organize your photos and videos. While the software on this drive may make it easier to organize users’ photos and digital life, it seems a peculiar item for Canon to introduce, and especially at a price point of $300, when for $100–$150 you can buy a drive with 3+X the capacity.

“I spent some time in the PMA section,” added Horan, “actually more time than I expected. It turned out there was more to see there than one may imagine. In the past we scored such great products as Rode microphones and profitable products from smaller manufacturers who are not being mobbed continuously and are happy to see you walk up. Hopefully, PMA may be able to reconstitute a show for dealers once again—ah yes, those were the days!”