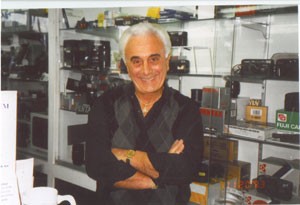 Huntington, NY—Leonard R. Totora, Jr., known to many in the photo-imaging community as Lenny, died on February 22 in Huntington Hospital on Long Island, following a battle with pancreatic cancer. Totora, 79, owned and operated L&L Camera in Huntington, New York, for more than 50 years.

After graduating high school, Totora served in Korea as a photographer attached to the 187th Airborne Regimental Combat Team, earning the Bronze Star. When the war ended, he returned to his lifelong home in Huntington and, in 1956, married his sweetheart, Louise Pisacano, and opened his camera store.

Totora, who was a fervent champion of veterans’ causes, became well known in his community as both an entrepreneur and for his work with veterans and the homeless. He was a driving force in the creation of Huntington’s Korean and Vietnam War memorials as well as in the restoration of the World War II veterans remembrance monument. Totora was a charter member of the town’s veterans advisory board and, at the time of his death, was vice chairman and liaison to the town supervisor’s office.

“He was instrumental in advancing the cause of all veterans issues,” Anthony DeFilippis, a longtime friend who considered Totora a mentor, told Newsday. “He also taught me the importance of looking out for your community and the people around you, I have great respect and admiration for Mr. Totora.”

L&L Camera serves the Long Island region, providing a broad range of cameras, equipment and accessories, with total customer satisfaction as its number one priority. “That’s why we’ve built our business on trust and service . . . two of the most important words that have contributed to our success,” Totora noted on his store’s website.

A Eucharistic minister at St. Patrick’s Roman Catholic Church in Huntington, where he also sang in the choir, Totora was also the author of Huntington Then and Now, which documents the history of Huntington through photos dating as far back as 1890, as well as many of Totora’s.