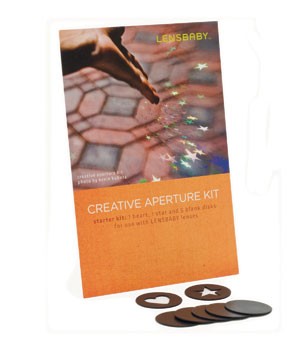 Portland, OR—Lensbaby would like to spruce up its Creative Aperture kit and is asking the Lensbaby community to submit new designs for a chance to have the winning photo showcased on the product packaging and the design added to the new kit.

Photographers can submit two of their best images taken with a Lensbaby lens and a homemade aperture disk for a chance to win. Lensbaby Creative Aperture disks are designed to allow users to custom cut shapes onto blank aperture disks in order to add unique effects to photos. The disks allow specular highlights (bright points of light in a photo—like streetlights or sunlight on a lake) in the out-of-focus area of a photo to take on the shape of the hole on the aperture disk. By using an xacto knife or craft hole punch, photographers can create a multitude of shapes. A video by Lensbaby president Craig Strong on how to create a custom disk can be viewed by clicking here. A gallery of sample photos can be found in the photo gallery on Lensbaby’s website, lensbaby.com.

“Our customers have outgrown the shaped aperture disks we created in our first starter kit, so we decided it was time for an update,” said Lensbaby president and cofounder Craig Strong. “Lensbaby users are highly imaginative and resourceful, so who better to turn to when looking for new shapes to outfit the next generation of creative aperture disks?”

In addition to having the winning photo featured on the product packaging with credit to the photographer, the grand prize winner of the Creative Aperture Kit Contest will receive the photo framed by Plywerk and the winning aperture design will be produced and included in the new kit, which the winner will be given.

Four runner-up winners will also have their aperture designs produced and included in the new kit, which they will receive, along with having their names added to the product packaging

Entrants are advised to keep their designs simple; the simpler the design, the more likely it can be mass produced with minimal tweaks. All photos must be taken with a Lensbaby lens and a homemade creative aperture disk. Complete submission guidelines can be found at lensbaby.com/creativeapscontest. Electronic submissions will be accepted until June 11, 2010, and the winning images will be announced June 18, 2010. Lensbaby Creative Aperture kits carry an MSRP of $9.95.