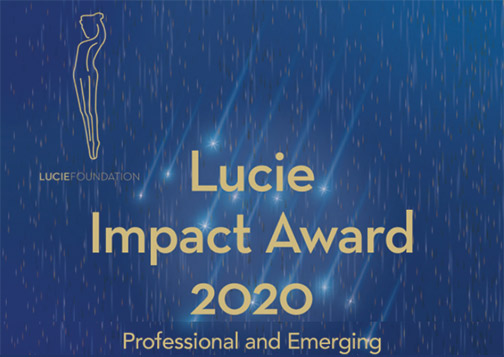 Los Angeles, CA—The 18th Annual Lucie Awards gala was postponed and rescheduled for October 19, 2021; this was due to the continued spread of Covid-19 throughout the U.S. and the world. However, the Lucie Foundation is continuing to honor and award photographers and industry luminaries who shoot impactful images via the Lucie Impact Award.

Created several years ago, the Lucie Impact Award is bestowed annually on stage at Zankel Hall at Carnegie Hall in New York City. However, as with so many other live events, the Lucie Foundation has found a way to continue the tradition. The Lucie Impact Award is given to a photographer whose image or body of work has created a difference in that particular year; this year is no exception.

In addition, the foundation will also award its Support Categories’ winners this year, with some variation due to museum closures and other unforeseen circumstances. The organization will provide additional information on those awards as well.

“Images today matter. Photography, with its power to inform and to bring intellectual and emotional understanding to complex issues, plays a pivotal role as a contemporary social witness,” said Lauren Wendle, president, Lucie Foundation. “Nominations from members of the Lucie Foundation advisory board are currently open and ongoing for the next two months.”

According to Wendle, the 2020 version of these awards for a series or single image is as follows. Nominees’ compelling images photographed between October 2019 and November 2020 are eligible. In addition, the public can search and nominate emerging and professional photographers by using the hashtags #LucieImpactEmerging and #LucieImpactPro.

In 2018, the Lucie Impact Award honored John Moore for his work on immigration. His powerful image on the cover of Time magazine, of a Honduran child clinging to her mother’s legs, humanized the plight of separated families seeking asylum at our borders. Although family separation was going on for some time, this seminal image mobilized the nation.

Furthermore, in 2019 Tyler Hicks received the Lucie Impact Award for the image of Amal Hussain, a young Yemeni girl who died at the age of 7. Hicks took the image while working for the New York Times on a story involving the tragedy of Saudi Arabia’s War. Subsequently, the image drew international attention to the country’s plight.

“These images make a difference as they bring awareness to issues and influence policies,” added Wendle.

The foundation will announce the recipient of this award closer to the rescheduled 2021 event.

The Lucie Awards is the signature program of Lucie Foundation.