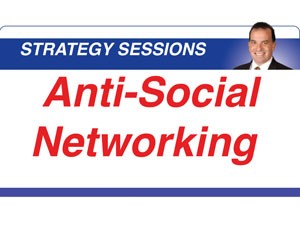 There is no bigger buzz phrase floating around these days than “Social Networking.” It’s the subject of the number-one movie at the box office. It’s the mantra of marketing gurus everywhere. It’s the “must do” in any strategic communications plan. It’s Facebook and LinkedIn and MySpace and a million other Internet-based meeting rooms all rolled into one.

Walking around photokina a few weeks ago, I came to realize the true value of trade shows and social gatherings. In addition to touching and feeling new products, and feeling the energy of the industry once again, I actually touched real people. I didn’t have to shoot them e-mails and wait for a response, and then go back and forth four times over before resolving an issue or a question. I didn’t have to check their status on their Facebook page or join their group on LinkedIn to hear about what was going on. I wasn’t depending on a text message to rock my world.

I actually shook their hands and spoke to them, face to face. I saw their lips move. It was a revelation.

The business world is becoming all about sending and receiving messages. Gone are the catch-up phone calls, casual dinners and social gatherings just for the sake of socially gathering. Ideas are no longer being cultivated; rather they are being thrown out there in a text message on a BlackBerry, which limits you to 75 characters. What great idea has recently emerged from 75 characters?

While trolling the vast halls of photokina, it dawned on me that we are losing the art of cultivation. Over a simple last-minute dinner in Cologne last month, an idea was hatched for our Demystifying Digital project with a valued client. The objective of the dinner was purely social, but the result was a business-building idea that will drive sales this holiday season.

I walked around and shook hands (yes, shook hands) with people I hadn’t seen in months, or in some cases years. Not that I haven’t been in touch with them . . . I just hadn’t touched them. Novel thought, right.

The PMDA, of which I am the executive director, is another example of a true attempt at social networking. Its mission is to foster congeniality among our industry, so we can share experiences and learn from each other. It exists because we are an industry. But its monthly social-networking gatherings have gone by the wayside because people seem to be too busy on their BlackBerrys to get together every once in a while just to chat. New ideas are under way to hopefully reverse that trend.

I was lucky enough at photokina to run into a number of members of the PMDA board. We planned to meet at a gathering spot for a quick bonding photo. San Diego, Fremont, NYC, Long Island, Center Valley, PA—all in one place, at one time. All of a sudden, our bimonthly conference call (almost a social network) became a true discussion.

The 2010 photokina was the ultimate photo social network—a worldwide gathering of corporate executives, sales forces, media, consumers and just plain photo geeks (aren’t we all) in one place, at one time. Not everyone spoke the same language, unless you consider imaging a universal language (I do). And their purpose wasn’t just to conduct business; they came to bond, to share stories, to hug old friends, to hoist a few Kölsch beers at the Fruh, and to revel in our industry. I saw some old friends I hadn’t seen in years, and I caught up not only on their product plans but also on their family plans.

photokina, PMA, CES, PMDA events . . . their value should be seen as more than just writing orders and going on your way. They’re about connecting once again to a time-valued tradition that seems to have lost its way in the maze of the Internet.

Facebook is not a social network. It’s a network of one-liners and status updates thrown out for the world to consider. It’s a fun way to reconnect with old friends without having to actually talk to them. It’s a forum for one-way ideas. It doesn’t, however, provide the key element to any successful business venture. . . .

Editor’s Note: The State of Our Industry 2022