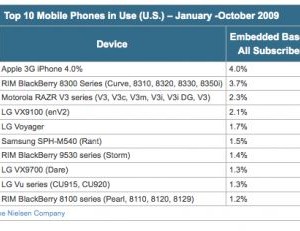 According to a new Nielsen survey, the Apple 3G iPhone represented 4 percent of the embedded base of all mobile device subscribers in the U.S. between January and October of 2009, making it the most popular handset by 0.3% over the Blackberry 8300 series.  The Motorola RAZR V3 series came in third, with 2.3%.  The rest of the top ten were dominated by LG (VX9100, Voyager, Dare, Vu series) and Blackberry (9530 series, 8100 series).

This news comes out the same week as a report by Nielsen indicating that mobile-phone only households are on the rise, with one in five houselholds reporting that they have no land line, only a wireless phone, an increase of 16 percent over last year.