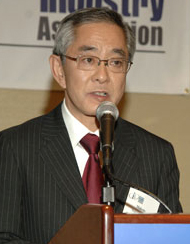 Included in the recommendation is the appointment of Kariya, 68, as chairman of the board, while retaining his post as representative director. This move makes way for Makoto Kimura, 62, to take the helm as president of Nikon Corp. Kimura is currently executive vice president and president of Nikon Corp.’s Imaging company, with deep roots in its digital camera business. Kimura will also remain a representative director and member of the board.

“[W]e need new ideas to achieve further growth,” Kimura said at a press conference in Tokyo, regarding Nikon’s imaging business. “I will try to add a more innovative and fun dimension to Nikon’s brand.” In addition to his long involvement in Nikon’s digital camera development in Tokyo, Kimura also served in New York from 1994 to 1998 as general manager of imaging equipment. “Our imaging equipment business has enjoyed constant growth over the past decade, but I don’t think the next 10 years will be as smooth,” he added, referencing the rapidly changing market with the advent of smartphones.