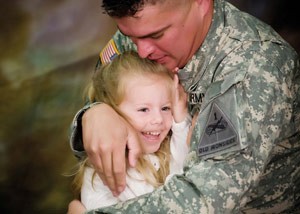 For several years, thousands of U.S. families have endured repeated military deployment of loved ones. In September 2006, Colorado-based photographer and military spouse Tonee Lawrence started Operation: Love Reunited (OLR) to capture the emotional homecomings and separations of families who are often too overwhelmed with emotions to focus on taking pictures.

Says Tonee, “My husband had deployed to Qatar in January 2005 and when he returned in May ’05 we were too emotional to take pictures. My boys were so excited to see their dad, but without pictures we had nothing to help them remember that day.”

Sixteen months later, OLR served its first client—Tonee’s best friend—when Tonee took several pictures of her friend with her three children and sent them to her husband in Iraq. “As far as I know, we are still the only organization whose policies and guidelines have been fully reviewed and approved by the Department of Defense,” she says.

Operation: Love Reunited in Action
The program is made possible by the dedication and generous spirit of the more than 930 photographers across the U.S. who are completely self-funded. Most have a connection to the military, through a spouse, other relative or prior military service. “We would love to be able to cover the photographers’ travel expenses and photographic expenses,” says Tonee. “Aside from showing our gratitude, it would help the organization attract more volunteers for our widespread events, which have received great interest since our Fort Bliss event in April 2009.”

Military members may participate with their families if they have received orders to deploy overseas, are currently deployed overseas or are coming home from an overseas deployment. Thousands of families have benefited from the program. When contacted by a family, a participating photographer arranges a photo session—waiving the fee—during which he or she captures the events and emotions of the family’s time together, then ships a 4×6 album to the deployed military member, at no cost to the family.

Kimbra Orr, owner of Littleton, Colorado-based Kimbra Studios (kimbrastudios.com), was motivated to support Operation: Love Reunited because she has a niece and nephew serving in Iraq. “I understand the difficulties involved for the families,” says Kimbra, who donates two dog tag necklaces from her line of fine photo jewelry to every participating family nationwide. “We have received wonderful e-mails from soldiers and their spouses saying how meaningful it is for them to keep each other close to their hearts while they are apart.”

Looking ahead, Tonee hopes to encourage other photographers to join so they can share the workload when a large deployment or homecoming is approaching. “I hope to be able to raise enough money to have conventions where our members can learn from each other and hear from military personnel about how the organization has helped them while away from home. These stories are inspirational and helpful to other photographers,” says Tonee.

Family Feedback
Families are quick to express their gratitude to OLR. Here are just a few of the thank-you notes received:

—“Our daughter was only nine months old when my husband came home from his first deployment with the Navy. I was so busy watching over her at his homecoming I wasn’t able to take the pictures I had dreamed of for so many months. Fortunately, an Operation: Love Reunited photographer took ‘Come Home Soon’ and ‘Welcome Home’ pictures for us. Our daughter will be 16 months when my husband returns from his second deployment, and I would love to have a photograph of my daughter welcoming home her daddy. Operation Love Reunited is the best thing I have come across since being in the military. Thank you for your wonderful images!”—Shannon

—“We had our session yesterday, and since my husband leaves tomorrow, our photographer proofed our session overnight so he could pick the photos he wanted. She was awesome! When I contacted her Thursday night, she agreed to do a last-minute session so we could have our hero with us after he left. I am truly thankful for the opportunity she gave us through this operation! I am sending all my FRG contacts this information, because I think it is so important to the soldiers and their families.”—Amy

—“I recently received the photo album and wanted to send you a short note to say thank you! We are very grateful for you and your colleagues. It means a lot to those of us away from home. You really made my day! Thank you again and all the best in the new year.”—Ron, deployed to Saudi Arabia

—“There is nothing more wonderful than having moments captured to get you through deployment and to celebrate the feelings of homecoming over and over again. As often as our troops are gone right now, sometimes all anyone has to hold on to is a picture. I know firsthand how amazing it is to see your child recognize his daddy from a picture and to see your baby reach for your hero and watch him hug your baby while tears stream down both of your faces. It is so important every family has those memories always.”—Jessica

As oftentimes happens with family portraiture, military families tell OLR their photos have taken on even greater significance when families suffer a loss of life. “Support your troops,” says Tonee. “OLR is a very emotionally rewarding organization to which to donate your time.”