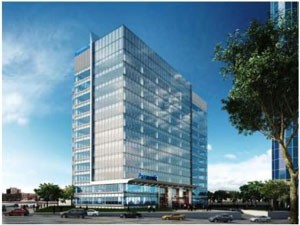 The structure, to be constructed adjacent to Newark’s One Riverfront Center, will be home to 1,000 of the corporation’s employees and contractors. Panasonic is currently located in Secaucus, New Jersey.

“This is a very exciting time in the life of Panasonic,” said Taylor. “This is the culmination of a very exhaustive process for us in which we examined all of the options available to us that would meet our needs and goals for our future as a green business technology leader. We are most grateful to the State of New Jersey and City of Newark for their support and efforts to make it possible for Panasonic and its employees to remain right here in New Jersey.

“Our plan over the next two years, working with Matrix Development Group and SJP Properties, is to have an entirely new and efficient high-rise office building constructed that is designed from an environmental perspective,” added Taylor. “We were looking for a solution that would be sustainable and easily accessible to mass transit that would enable Panasonic to greatly reduce its carbon footprint and demonstrate our credibility as a sustainable company. We have found that solution here in Newark.”

At the press conference, the parties to the agreement signed the lease, and Taylor pinned eco-pins on Mayor Booker and Lieutenant Governor Guadagno, symbolizing Panasonic’s and Newark’s joint commitment to green building and green practices. The proceedings were broadcast live via a high-definition videoconference to 60 employee advocates at Panasonic who will spread the word to other employees and ensure a smooth transition to Newark for Panasonic personnel.

In other news, Panasonic Corporation announced plans to build a lithium-ion battery plant in China and boost capacity for those batteries at its existing Chinese plant next year, a person familiar with the matter told the Wall Street Journal. Facing strong market competition from Korea-based Samsung, according to the Journal, Panasonic, the biggest supplier of Li-Ion batteries for consumer electronics, will build the factory in the eastern Chinese city of Suzhou. The company also will add facilities at subsidiary Sanyo Electric Co.’s plant in Beijing. Production of lithium-ion batteries at Sanyo’s Japanese plant in Hyogo Prefecture, in western Japan, will move to the new Chinese facilities, the person told the Journal. The Sanyo factory recently stopped production of the batteries but won’t close, since it also manufactures other products. The person familiar with Panasonic’s China plans told the Journal the move was already being planned before the earthquake in Japan, “as part of discussions on how to integrate Sanyo’s operations.” panasonic.com