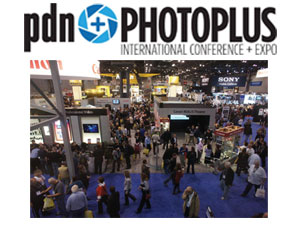 Big DSLR makers—Nikon, Canon, Pentax, Olympus and Sony—were there in force demonstrating their latest wares. There were large crowds at the Sony booth that featured BMX bikers and skateboarders doing their thing on the “half pipe” so fans could assess the swift AF-tracking speed of the Sony Alpha 55 and NEX-5. There were also enthusiastic throngs getting a lot of hands-on time with the cool Canon 18MP 60D, the first EOS with a tilting, pivoting LCD; the prosumer Olympus E-5; enthusiast-aimed Pentax K-5; and the Nikon D3100, a moderately priced DSLR offering 1080p HD video capture complete with advanced AF-tracking options.

Indeed, the meteoric rise of HD video-capable DSLRs and other interchangeable-lens cameras was evident in the plethora of HD aftermarket accessories shown by companies like Redrock Micro and IDC, and the number of avid gawkers.

Continuous lighting equipment was another big attraction for attendees. The guy at the Westcott booth held forth with a quick course on lighting so concise and dynamic that one photographer toting a Nikon D3X with a humongous lens quipped, “I think I learned more about what I didn’t know about lighting in the last five minutes than I did in the last five years!” He also liked their new continuous fluorescent Spiderlite, which was of course the promotional goal.

At the Tiffen booth, Duane Sherwood of Lowel spoke knowledgeably to a rapt group of pros on another continuous location lighting setup, the new three-light Lowel Trio Kit with reversible barn doors that stows in a slim-line carrying case—a high-end studio in a box.

Not surprisingly, the flash memory guys at SanDisk and Lexar did a brisk business in promoting their latest high-speed high-capacity memory cards—the essential accessory for HD video shooters.

Contributing greatly to the atmospherics of the event was the quality and competence of many of the presenters. At the Nikon, Canon and Sony booths there were projection theaters where audiences of up to 100 were treated to articulate and engaging presentations by top pros. And they didn’t merely extol the virtues of their sponsors’ products—they actually educated consumers and prosumers on photographic techniques, teaching by example and showcasing some truly outstanding images.

The printout contingent was also an active presence where full-time and part-time pros could be seen asking questions next to a giant Epson printer, and at smaller booths specializing in frames, textured prints, etc. One item that caught our eye was Arty Couture, a company that goes beyond canvas to Gallery Blocks—pictures printed on wood with an attractive and, yes, artsy, wood block look. If you think canvas wraps are old hat, this might just give you a glimpse of the next textural frontier.

Of course there were a gazillion digital point-and-shoot cameras on display as well—a brilliantly colorful array of slim-line models at the Pentax booth and dozens of the latest, stylish Sony Cyber-shots, Nikon Coolpixes and Canon PowerShots. One model that caught our eye was the Nikon Coolpix P7000, designed as an obvious archrival to the mighty Canon PowerShot G12 and clearly aimed at the lucrative serious enthusiast market. We can’t go over all the ingenious modes built into this full-featured jewel, but Nikon’s inimitable Lindsay Silverman sure got our attention when he showed us the tab-setting option on the zoom control that lets you automatically stop at your favorite focal lengths (we like 28mm, 50mm and 180mm equivalents) on this cool-looking 7.1x zoom model.

As someone once said, competition is the right arm of America, and ultimately that’s what drives hordes of rabid photo enthusiasts of all stripes to venture forth to the no-man’s-land of 11th Avenue and 37th Street—an area utterly devoid of good restaurants and cheap parking—just to get to play with the latest gear, learn something new and, yes,  make purchasing decisions. Whatever else you may say about PhotoPlus Expo 2010, it was generally well executed and a hell of a lot of fun—even for members of the trade and press, including your fearless and footsore reporter.