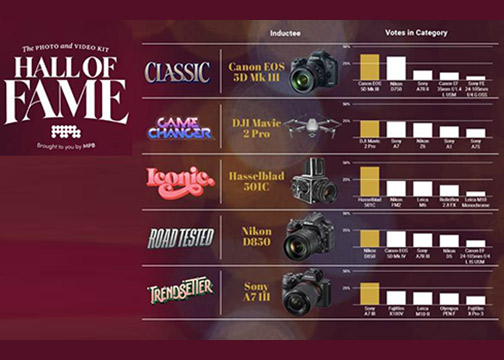 Brooklyn, NY—MPB, a global online platform for used photography and videography equipment, unveiled the five pieces of kit that won the public vote in the Photo and Video Kit Hall of Fame Class of 2021.

“It was an extraordinary experience to watch the Photo and Video Kit Hall of Fame grow from an idea to the event it is today,” said Matt Barker, CEO and founder, MPB. “We are honored to have built a space that allows photographers, videographers and also tech enthusiasts to express their passion for these products; as well as educating others on the vast and incredible world of photo and video kit.

“The final inductees give the perfect insight for visual storytellers to consider the kit that is right for them when they want to try something new, hone their skills or pursue their passion.”

This year, the inductees of the Photo and Video Kit Hall of Fame are:

“Having been shut out in the 2020 of the Photo and Video Kit Hall of Fame, Canon has claimed its rightful spot and this year sees the Canon EOS 5D Mk III honored as the Classic inductee,” MPB announced.

In another first, the DJI Mavic 2 Pro is the first-ever drone inducted into the hall. In addition, the DJI Mavic 2 Pro joins the GoPro Hero, which was inducted as last year’s Game Changer. This highlights the growing trend of visual storytellers seeking out previously impossible-to-capture landscapes and activities.

The Photo and Video Kit Hall of Fame

A symbol of admiration by kit lovers from around the world, the Photo and Video Kit Hall of Fame pays homage to the cameras and lenses that have redefined the photography and film industry.

This year saw MPB call on a global nominating committee made up of some of the industry’s most regarded photographers and journalists. Drawing on their collective decades of experience, the committee selected a short list of kits to put to a public vote.

The public ballot saw kit lovers from more than 70 countries cast 31,275 votes for their favorite cameras and lenses across five categories. Twenty-five nominees appeared on the ballot. From must-have classics to the most extravagant kits visual storytellers dream to own, each category celebrates the brilliance of photo and video kit in its own way.

Here’s what the nominating committee had to say about this year’s category winners.

Since its release in 2012, the Canon EOS 5D Mark III has become a staple in photographers’ and videographers’ kit bags. Its impressive specification is perfect for those who want to make the jump from hobbyist to professional. A Classic inductee stands as a benchmark for quality in an ever-changing world of gear; perfect for anyone looking to get into photography.

One of the most powerful drones, the DJI Mavic 2 Pro took visual storytelling to new heights; it captures standout–quality images from incredible angles, all packed into a compact and portable design. What’s more, Game Changers disrupt the field by ushering in new technology, expanding product capabilities or making quality more accessible.

The Hasselblad 500 series forms some of the most quintessential cameras in photographic history. A legacy of true craftmanship, the Hasselblad 501C is still one of the most lusted after medium formats nearly three decades after its release. Symbols of quality, idolization and inspiration, Iconic inductees are the crème de la crème of photo kit.

This high-resolution DSLR rises to the challenge every single time. The Nikon D850 is a fantastic all-rounder that offers quality as well as reliability in the most demanding of environments. Moreover, Road Tested inductees represent the workhorses of kit. This gear is tried-and-true from rainforests to runways; these nominees deliver time and time again.

The Sony A7 series continues to pave the way for mirrorless technology. With outstanding image quality and 4K video packed into a sleek travel-friendly body, it’s no surprise the Sony A7 III is a popular model amongst content creators as well as professional photographers. A Trendsetter shapes conversation about how it looks as well as the images it captures.

MPB will induct the Photo and Video Kit Hall of Fame’s Class of 2021 this fall.