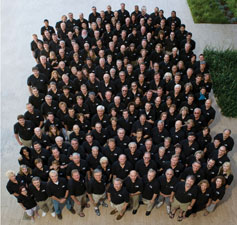 Why join a buying group? Because you need every edge you can get.

Or, as John Albright, owner of Fromex Photo & Digital in Long Beach, California, and a member of IPI, the Independent Photo Imagers, says as he cuts to what may be the heart of the matter: “I don’t see how anybody can survive in this industry as an island, trying to figure out everything for himself. It’s just impossible.” Albright has heard comments from other IPI members to the effect that if it weren’t for IPI, they wouldn’t be in business today. “I certainly agree with that,” he says. “The benefits are overwhelming.”

He doesn’t mean just the financial benefits, though that’s what initially draws most people in. “They think they’ll save a lot of money on their paper and supplies,” he says, “and they do—it’s tens of thousands of dollars. But in the long run, if you ask anybody who’s been in the organization any length of time, that’s just the frosting on the cake.”

The cake itself? “I learn from other members, share ideas and pick up things I could never have found from research on my own.”

So if, for example, something goes wrong with one of your machines, chances are there’s a member or two or more who’s had that problem. Log onto IPI’s forum and start asking questions. “You see it every day,” Albright says. “Somebody posts and says he’s getting an error on this or that machine—what’s happened? How can I fix it? And somebody will chime in with, ‘Oh yeah, that happened to me two years ago. Here’s what you do.’ You can’t put a price tag on that; it can keep you in business.”

Mike Worswick, owner of Wolfe’s Cameras, Camcorders & Computers in Topeka, Kansas, is president of the PRO Group, and he sees the strength of buying groups not so much as a matter of strength in numbers but rather strength in smarts. “We like to find new members who are like-minded and who will embrace our philosophy of doing business at retail.” So it’s not necessarily buying things cheaper that’s the key; it’s a matter of understanding PRO’s system of doing business in order to maximize the revenue blend—“to have a profitable mix at the end of the sale.”

And that system, Worswick says, has become a pattern for the big guys as well as the independents. Best Buy, for example, has learned that in order to be successful they have to sell more and more products that are available exclusively at Best Buy stores.

We need to motivate people

to do something with the images—to make

“We believe that the sale of exclusively branded products is a very valuable concept to any kind of retailer today,” Worswick says. “You can see the growth of controlled brand or exclusive brand [merchandise] happening at Best Buy, at Walmart, at Saks Fifth Avenue . . . every range of store from bargain oriented to most sophisticated.” Walmart, he adds, has over 2,500 items in their grocery aisle that are only available at Walmart.

The way that translates to the photo aisle is, say, ProMaster tripods with a patented Speedi-Lift feature; or a memory card that’s highly resistant to shock and moisture; or a new lithium battery tester/charger that’s as near universal as PRO is willing to call it. In other words, products that create value for the consumer and profits for the dealer. Margin, after all, is generated not just by buying at the right price but also by selling likewise.

According to Worswick, the system works. “We’ve had some members report they had highly profitable years in 2009 and so far in 2010,” he says. Plus, while PRO’s membership has not gone up dramatically, PRO’s sales to its members have increased over 30 percent.

Ultimately, Worswick suggests, the products carry the freight for PRO members. “There are a lot products that we’re being asked to sell at 10 percent gross margin. I’m not aware of any storefront retail business that has a cost of operation in the neighborhood of 10 percent. The death wish of supplier pricing and Internet pricing on major
hard-good items makes a sufficient gross margin impossible. So you can trade ideas all you want, but if there isn’t a mechanism to help you build that sufficient gross profit margin, it’s all for naught. Best Buy knows this, too, and they’re trying to figure out how to live with selling something at an absurdly low gross margin and yet reach a blended margin at the end of the day that allows them to create a return for their shareholders.

“So we are attempting to provide some of that same opportunity for independent specialty stores,” he says with an admirable lack of sarcasm, “to find a blended gross margin that allows profits.” Apparently, PRO’s succeeding. “I can’t tell you how many people have said that without PRO they would not be in business.”

John Albright, at Fromex, seems to place a little more weight on the free exchange of marketing, promotion and advertising ideas—and even a little help with supplies. “We are in competition with each other,” he says of IPI members. “And we sometimes have multiple members in the same towns—sometimes in small towns, where they are the only two labs or camera stores/labs left. But in most cases that’s not a problem. They’re happy to share. If one runs out of something one day, he drives over to the other guy and borrows it. The guys who don’t share, who don’t learn from each other, I think those are the guys who aren’t here anymore.

“Frankly,” he says, “we need each other to survive, and the survivors aren’t here by luck.”

“You see the growth of exclusive brand

at Walmart . . . at every range of store

from bargain oriented to most sophisticated.”

PRO member Ethan Allen, president of Allen’s Camera, with three locations in Utah, maintains that the exchange of information is the group’s greatest asset. Ages ago, he says, someone at a PRO meeting told him about the profitability of movie-to-video transfer. “We were just a camera store, but we got into transfers and they got to be 20 percent of our business.” More recently PRO advice on duplication of DVDs has become important, as has “printing outside the 4×6 realm.”

And, suggested Brian Wood, owner of PhotoVision in Salem, Oregon, you’re going to need strength beyond the team. Wood is a member of IPI and serves on their executive board, but he’s also the current president of PMA. “As important as the buying groups are,” he says, “without a nonpartisan central figure to bring everybody together on an annual basis, where would this industry be today? And that central figure is PMA.”

Wood sees the key issue facing the industry as one of consumer motivation. “Our problems surely don’t have to do with people taking pictures. We have a snap-happy public—there are more images being made than at any time in history. But capturing images doesn’t make margin. We need to motivate people to do something with the images—to make prints, create albums, give photo gifts. PMA’s strength is in that area, in educating retailers, in talking about marketing programs that generate sales. You can’t save yourself into prosperity. You need gross sales.”

These days a lot of things have to be in place for the imaging retailer to make a living. In addition to buying power and information, maybe the reassurance that you’re not in this alone is one of them. ipiphoto.com and promaster.com