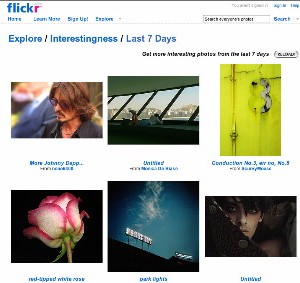 We’ve covered the phenomenon that is online social networking/photo sites and quietly wondered at what point the craze might begin to die down. The answer is apparently not for quite some time. Recently released statistics from online site trackers Nielsen//NetRatings show startling growth numbers for all the major photo sharing sites from April 2005 to April 2006, but none were more spectacular than Flickr which showed a whopping 346% growth rate during that period. The site went from 1.1 million new users in April 05 to over 4.8 million in April 06.

While Flickr led the category in growth, the site actually placed fifth in overall new visitors as Photobucket.com led the way here with 7.83 new visitors during the April-April time frame. Yahoo! Photos was next with 7.8 million unique visitors while Kodak’s Gallery site placed third with 6.5 million new players. Webshots came in at number four but actually saw their numbers decline during the period from 7.1 million to just over 6 million.

Clearly, with the recent Yahoo! Purchase of Flickr the combined entity now ranks number one overall with approximately 11.2 million new visitors from April 2005 to April 2006. Dying down? We stand corrected.