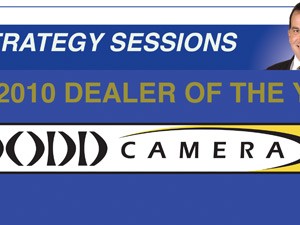 Dodd Camera, PIR’s 2010 Dealer of the Year, is a successful 17-store chain with locations in Cleveland, Dayton and Chicago that has been around in one form or another since 1891. Over the years, it has shed its original art supply product line and has survived and prospered under three families—the Dodds, Greiners and currently the Carreras. And Mark Leonard, its down-to-earth president, doesn’t follow the rules.

Its stores should have planograms and selling quotas. They don’t.

The stores shouldn’t all be profitable. They are.

Its president shouldn’t put his personal phone number into all of the stores’ ads, inviting disgruntled callers to pick up the phone and call 216-361-6811, ext. 300. He does.

And Leonard probably shouldn’t consider his employees “coworkers.” Yes, he does.

It’s unconventional, but it works.

Mark Leonard started working for Dodd’s in the stockroom. “In high school, I was a stock boy in Cleveland Heights; it was my after-school activity. I took inventory of the nibs, sold photofinishing and although I wasn’t really into photography, I worked with a lot of people who were. I just needed money to fix my hot rod.”

Despite many Greiner family members in the business, Leonard spent years working his way up the Dodd system and was able to rise to the top through hard work, determination and an incredible way of getting the most out of people. That’s what he sees as his greatest strength.

“We provide a framework and policies, but we’ve really tried to capture an entrepreneurial spirit and a sense of pride in doing what you do from the management staff,” said Leonard. “In fact the managers are in a profit-sharing plan, so if their store does well, they’re doing well. Smaller stores can perform as well as a bigger one if a manager controls costs and promotes the right services and product lines. Stores don’t do their own marketing, but there are no planograms. If your store likes Nikon better than Canon, then go have fun.”

Leonard wants his employees to be believable when they’re selling, and a customer knows when they’re being pushed. “Ideally, we want to sell the customer an appropriate product for their needs, but if the customer has a need and not a brand preference, and you’re biased toward, say, Tamron, then show them a Tamron lens. If a customer wants a Nikon D3100, then sell them that.”

It’s this entrepreneurial spirit that has Dodd Camera employees beaming with pride. In fact, just this past August, the Dayton stores that were formerly Click Camera stores (through an acquisition five years ago) officially took on the Dodd Camera brand, and the former Click employees are thrilled.

“When we bought Click Camera in Dayton, we kept the name Click,” said Leonard.  “And I really wrestled with that thought. I looked at what Ritz had done, and in most cases they left the name, and I thought that made a lot of sense; I thought, ‘ego kills businesses.’ They had the equity, so we left the name alone, and we had an awful lot of work to do to reinvent who Click Camera was.”

Then two years ago, Dodd’s relocated three of the Click stores simultaneously, so it seemed like a good time to change out the Click name with the Dodd name. “I was going to do it, but the clincher came when I was dealing with a commercial carpet installer and he said, ‘Dodd Camera, I never heard of you.’ The electrician we were using said the same thing. The common man in Dayton knew Click, but not Dodd.”

Finally, in August of this year, they finalized the name change from Click to Dodd. “It was time,” said Leonard. “The Click name, while it was recognizable, had lost its equity. What it meant to customers was ‘that’s where you get your pictures to be developed.’ They were actually putting up a Click Camera sign and I made them take it down,” he said.

The emotional lift has been interesting; customers have been totally fine with it, and the employees’ spirit went through the roof. They were so happy to lose the ghost of the old company and feel like part of the Dodd Camera family.

For Mark Leonard and Dodd Camera, it’s really about the employees. He empowers them; he calls them his coworkers, and he gives them enough confidence that they feel a true sense of ownership.

Leonard’s management style, and the structure of the company, practically forces a one-to-one relationship with his store managers. “They all report to me, except for the Dayton stores, which report to Chris Korllos. I hear from all of them around once a week or so. I don’t need to be all over them. If there’s an issue, they call me. Of course, I see their numbers every day, so if there’s an issue and they don’t call me, I’ll gladly call them.”

The individual stores don’t have quotas; rather they pay commissions, spiffs and bonuses for the managers. “I think quotas create an artificial motivator and maybe resentment,” said Leonard. “It suddenly makes me all management and them employees, instead of coworkers. We’re all just coworkers, and the minute I’m the boss and they’re not, I have a hard time getting the point across. So I’ve got a lot
of coworkers, but because I have access to information they don’t, I can take that knowledge and try to distill it and offer it to those folks, and ask them what we want to do with this, and come to a collective decision to do the right thing.”

Typical of Mark Leonard, he pleaded with me not to make this article all about him. But his management style, and his sense of empowerment, makes it less about him and more about the people who have enabled Dodd to be a big
camera store chain with a small mom-and-pop feel that promotes a true sense of ownership.

“I still see us as a small company,” Leonard beamed. Or just a really, big family.