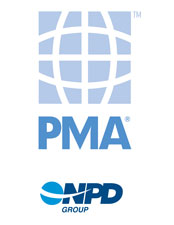 Jackson, MI—PMA reports consumers bought cameras and still made prints last summer, but they were particular about how they captured images and where they made their prints. The conclusions are based on results of The PMA Quarterly Printing and Camera Trends Report covering July, August and September 2010, with a key finding being that “consumers were making fewer prints at home.”

Whether because of convenience or expense, PMA notes that consumers increasingly turned to online photo services for prints and also looked to their local retailer to make their prints.

As for camera buying, while most camera sales were down, consumers were opting for the high-end models; cameras with 12 or more megapixels were the only models that showed an increase in sales, according to the trends report, which is available exclusively to PMA members. PMA also translates the camera sales data from The NPD Group into year-over-year trends on both a monthly and year-to-date basis. Here are some highlights from the report.

Digital Printing Volume Overview. In the three-month period covered by the report, consumers made fewer prints on their home printers, but they are getting prints: September showed a 12 percent increase from the previous period in 2009 in digital prints ordered from an online photo service. “The change in prints made at local retailers (excluding kiosks) fluctuated each month but still showed a positive change,” PMA states. Consumers are also making prints at other locations, such as at work, with that number increasing to 43 percent in September from the previous year.

Digital Printing Share Channel Trends Overview. A notable trend, according to PMA—and good news for photo retailers and photofinishers—is consumers are “increasingly placing their print orders online and then picking them up at retail.” In August there was a 2 percent increase in year-over-year figures, and that increase was nearly 4 percent for September. Over the course of the study, there was a decline in printing from home (29 percent in July, 28 percent in August and 26.6 percent in September), and the retail channel accounted for about 57 percent of the overall printing volume in all three months. The retail printing figures represent an increase across the board, with a 5 percent increase in July and a 4 increase in September. While online services saw their market share dip in July, it increased slightly (from 13.6 to 14 percent) in September.

The printing trend results are garnered from the PMA Monthly Consumer Survey, which is distributed to a panel of U.S. households, and results are sought from 2,500 prospective respondents each month. Available from the marketing research area of the PMA website (pmai.org), The PMA Quarterly Printing and Camera Trends Report is available for member download.

PMA reports that during the three-month period covered by this report overall camera sales were flat or down slightly from the previous year, but August 2010 saw a 3 percent increase year over year, attributed to a 2 percent rise in digital camera sales.

Analog camera sales were up 30 to 40 percent last summer, fueled by an increase in instant camera sales, particularly in dollar-based statistics.

Dollar-based statistics for September showed an 11 percent downturn in cameras with 12.0-12.9 megapixels and a 230 percent increase in 13.0 and higher megapixel cameras.

“The fact that the high unit increases don’t directly correlate with dollar statistics reveals that low prices for high megapixels mean consumers can get more for their money, and are either buying new models are simply upgrading from their current model,” concludes PMA.

The NPD Group provides PMA with camera sales statistics on a monthly basis. These statistics reflect point-of-sale data, as well as projections from NPD. PMA translates the data into year-over-year trends on both a monthly and year-to-date basis. In addition, PMA also provides market share-related information. Additional information regarding NPD and its methodology is available from The NPD Group: npd.com.