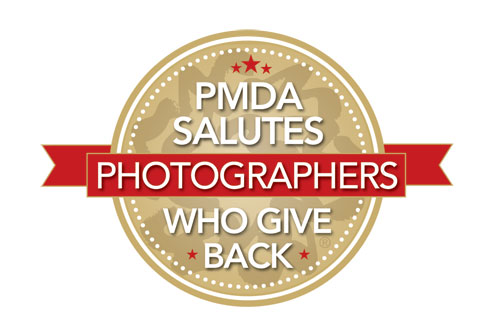 Woodbury, NY—On the evening of November 10, 2015 at the SVA Theatre in New York City, the PhotoImaging Manufacturers and Distributors Association (PMDA) presented their first PMDA Salutes Photographers Who Give Back event. During the event, attended by professional and student photographers as well as industry leaders, PMDA honored three professional photographers and one recent graduate from the School of Visual Arts, who have used their talents to further the causes they believe in.

As Brown was on assignment in Iceland, Katz related his story about The Giving Lens, an organization that blends photography with the notion that more can and should be done to help those in need around the world. Each year, TGL offers 6–10 unique trips around the globe that not only focus on helping participants improve their photography skills but also on making a tangible difference in the communities and in the lives of individuals it works with in each country.

Katz then introduced Ted Kawalerski, a photographer and video producer, who presented an inspiring 10-minute documentary on the Family Life Academy Charter School (FLACS), which was founded in 2000 through the efforts of a visionary group of community leaders in the Bronx.

The challenge for FLACS has been how to address the unique educational needs of some of New York City’s most at-risk students.  The educational model of FLACS, which  began with the first school on West 170th Street, has since expanded with the opening of a second school in 2010 and a third in 2014. Combined, the three FLACS schools educate approximately 768 students in grades K through 8.

Grossman then returned to the stage to present the first annual Anthony M. Ruotolo Photojournalism Award to SVA graduate Elise Swain. Named in honor of former PMDA board member and Pop Photography publisher Anthony Ruotolo, who passed away in June 2015, the award is being funded by PMDA and Popular Photography magazine to help aspiring photojournalists further their craft. Simone Ruotolo was invited to the stage and spoke emotionally about her husband’s life, his passion for photography, and his commitment to helping others.

She then bestowed the award to Swain, who presented her work and spoke ardently about her photojournalist endeavors in support of the #blacklivesmatter cause.

Finally, Katz introduced professional photographer Tamara Lackey, who was honored for her charity Beautiful Together, a nonprofit organization she cofounded. Beautiful Together works to improve the quality of life of children waiting to be adopted, living in foster care, group homes or orphanages through a combination of professional photography, video profiles and social outreach. Her exquisite images, which showed how simply hanging pictures can brighten up an orphanage for underprivileged children, were both uplifting and beautiful.

The evening ended with PMDA’s program director, Michelle Tramantano, thanking the sponsors, including PDN magazine, Nikon, Canon, Eyefi, Ricoh, Sony, Samsung, Sigma and Tamron. She then invited attendees to a networking cocktail party where photos were taken and sponsor products were raffled off.

It was truly an inspiring event and the first of what will be a continuing program for PMDA. Added Stephen Frailey, chair of the SVA Photography and Video Department,  “Congratulations on this fine event and thanks for honoring Elise for her work. Thank you also for involving SVA in a very worthwhile endeavor.” pmda.com