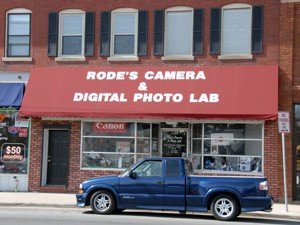 Kenosha, WI—Founded in 1911, family-owned Rode’s Camera and Photo Supplies celebrated its 100 years of business in the Kenosha community, marking three generations of family operation. With a deep passion for photography, John Rode, Sr., started the business while still working at the Jeffrey Motor Company.

In 1923, Rode moved his fledging business to a new building to house a photo lab, and for 17 years he used Kappus bread trucks to pick up and deliver photofinishing throughout Kenosha County. Rode’s Camera moved to its present location on Roosevelt Road after John Rode, Jr., returned home from serving in Italy during World War II.

Over the years, the store remained successful, selling 1,300 cases of flash bulbs and thousands of rolls of film each month, while providing retail and wholesale services to about 70 family drugstores in Racine, Kenosha County and Lake County in Illinois.

Tragedy struck in 1955 when a fire destroyed the first two floors of the store, however, Rode’s Camera came back strong to continue as a solid player in the photo business.

While mom-and-pop photo shops have declined in number over the years, Rode’s has survived by keeping abreast of changes in the industry. With technology comes change, particularly the digital revolution. And Rode’s has stayed in step with technology to provide its customers with the knowledge and services they desire. Though Rode’s started by providing film and movie processing, they followed industry changes and eventually began selling camera equipment and supplies.

In subsequent years, Rode’s installed the first one-hour photo lab in Kenosha, a full-service photofinishing lab that prints from digital files to serve professional photographers across the U.S. In 2005, the business expanded its horizons again to offer wedding and sports photography services.

The store is now owned and operated by John Rode, III, who began working in the store full-time in 1971. Now a member of the LifePics network, Rode’s offers its customers a wide range of print and photo products, but according to Rode, III, “The success of Rode’s Camera, besides offering great products and services, is the staff. We have been blessed over the years to have dedicated, talented and knowledgeable staff members working at our store.”