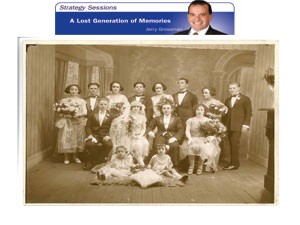 IT’S NOW A DOCUMENTED FACT THAT PEOPLE ARE PRINTING LESS—a lot less. And while it’s not great for business in general, my real fear is that if we’re not careful, this will not be great for our future legacies.

My mother, like many of yours, was the family historian. Although she passed away four years ago, she left her family with more than her incredible kindness and strength. She left us with our own history.

Her photo albums documented our lives. They began with photos of my father from the 1930s, though his years with his Army buddies during World War II, and throughout his life as one of the “Greatest Generation.” They include her childhood growing up in the Bronx, with pictures of aunts, uncles and cousins, allowing me to peek into my own history and ancestry, seeing the faint resemblances of my great-grandfather carried down to my 17-year-old son.

Lining our bookcases, her albums were organized in five- and 10-year time periods: the 1940s, 1950s, etc. As our own family grew, so did the frequency of the albums; they documented my older brothers’ antics before I was born, and I was able to see my brothers and sister fawn over me in black-and-white photos, and see them in those family portraits with starched collars and styles that spanned generations, and high-school varsity jackets in Kodachrome prints that are now slightly faded. All of these forever reside as prints under a glassine cover. Forever.

Many of those albums now adorn my bookcases and those of my siblings, and it is rare that a gathering goes by without someone reaching for these family histories that often jump start stories of years gone by.

This is not only my story, but it is the story of many people my age, slightly younger and certainly older. They are the printed memories that people always say will be the first ones grabbed in the event of a house fire or other catastrophe.

Why bring all of this up? Because I fear that our kids, and the kids of future generations, will be losing a piece of their own history, and they won’t realize it until it’s too late.

We are now taking more pictures than ever before—by a landslide. Between digital cameras and the emergence of cell phone cameras, moments in time are being documented at an incredible pace. That’s the good thing.

But our memories are not being preserved. They are being sent across the Internet, or across 4G networks for our friends and families to temporarily experience. They are being uploaded to Facebook to reside in an electronic format for as long as that lasts.

Why bring all of this up? Because I fear

that our kids, and the kids of future generations,

will be losing a piece of their own history,

and they won’t realize it until it’s too late.

But, if we’re not careful, they are also being lost forever. Whoever thought that the “shoebox” would be better than what’s happening today? To me, the box full of undocumented free-form prints, just waiting to be put into an album, is better than what electronic sharing is providing today, because, quite simply, the photos exist.

So why aren’t people printing, and how can we fix it? Here are my hypotheses and suggestions.

1. We’ve added too much complexity to printing. Sure, the 24-exposure role is a thing of the past, but it’s just not easy to print anymore, and it doesn’t have to be that way. With the cost of memory cards so low, why not start taking in memory cards for full printing? Bring in your card, drop it off and we’ll print everything, and give you back your card. Sound familiar? I know it’s being done, but is it being promoted?

2. Perfectionism is driving people away from photo books. My mother had it right: take 20 pictures each month, line them up in an album, write a few notes alongside of the pictures or in the margins, close the book, and put it on the shelf. My hypothesis is that photo books are intimidating not because they’re difficult to do, but because they demand much more creativity than most people think they have. Helping people to auto-populate an album or photo book each month will ensure that lives are being documented without having them feel like they’re just not creative enough to make an album. And it will also introduce them to the photo book on a trial basis, which might encourage them to try again.

3. People aren’t printing because no one is reminding them. There used to be a reason to come back into the store—to drop off a roll of film. It was a self-fulfilling prophecy that was the reason why cameras existed. Today, people buy digital cameras and you never see them again. Well, give them a reason to come back. Are your sales associates encouraged, or incentivized, to remind people to print. Are you training them in how to create photo books themselves, so they can show their own creations to your customers? Try giving your digital camera customer a blank 20-page photo album with each digital camera purchased, and maybe another one when they fill the first one up. Maybe a coupon for a free photo book that expires in 60 days. You’ll make your profits on the prints, and on the goodwill from your customers.

4. We have to get the images off the phones. I’m one of those who do not believe that cameraphones will threaten the sales of digital cameras. However, just because most of you don’t sell cameraphones, it doesn’t mean you can’t profit from them. So many images are being taken with iPhones, Droids and BlackBerrys, without any thought to printing them. It’s time to start holding classes on phone printing. Many kiosks now accept Bluetooth transfers from phones. The new Kodak kiosks can connect to Facebook and pull images down to print. Are they the best quality? No, and customers should be forewarned. But is a Facebook printed photo album a bad idea?

Those are just a few ideas, but I’d love to hear more. Please e-mail me your suggestions at jgrossman@direporter.com, and I’d be happy to share them. As an industry, we need people to understand the pitfalls of not printing. We need to help them understand that future generations will have no idea who they are if they don’t leave something behind—and that, unlike computer hard drives, photo albums don’t crash. They live forever.