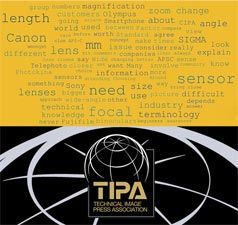 The organization began the initiative by questioning whether the age-old adage “A photograph is worth a thousand words” still makes sense in the digital era. TIPA acknowledges that throughout time, the original meaning of many words in all languages have changed or faded into oblivion. And this has also happened with photographic language due to the development of new techniques or technologies during the 175 years since its birth.

For example, today photographers and the industry still use words and expressions from film photography to describe digital photography concepts. While in most cases this is not a problem, the “old” words can be confusing to anyone who is too young to have used film photography.

The Technical Image Press Association started discussing this topic years ago when it suggested the use of CSC as an acronym for compact system camera to define the new family of interchangeable-lens compact cameras. TIPA believes CSC represents the essence of the new system much better than the term “mirrorless,” which means little to people who do not know what a mirror has to do with a camera. The association has been gratified to see how many in the industry and in the press are using the CSC terminology.

TIPA then opened an internal discussion about three basic elements of photography: focal length; sensor formats; and depth of field. An example of why they believe the combination of these three elements produces confusion is when a compact camera with a 6mm lens is said to be equivalent to a 24mm lens designed for a 24x26mm format DSLR.

To check reliable opinions on this matter, TIPA held an informal meeting during photokina 2014, where representatives from Canon, Fujifilm, Olympus, Sigma and Sony joined TIPA editors to exchange ideas about terminology. The participants concluded that the question is real but there are no easy solutions in scientific or commercial terms.

However, thanks to the interest shown in Cologne, TIPA has decided there are good reasons to develop this project. The association recognizes that more companies and organizations should be involved, and TIPA is working to see that this happens. tipa.com