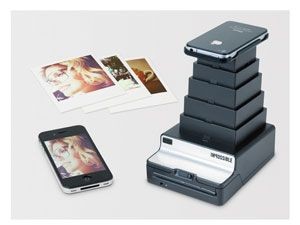 New York City, NY—Impossible introduced its Instant Lab device via the company’s Kickstarter campaign. The device builds a bridge out of the digital and into the analog world by turning iPhone images into analog instant photos on Impossible film.

“The Instant Lab is the Impossible answer to a question that we have been posing for a long time: Is there a convenient but truly analog way to transfer our everyday iPhone images into the unique, real and magic photographs we love so much?” commented Florian Kaps, founder of Impossible. “The experience of now finally merging the digital with the analog world of photography using this Impossible machine exceeds our wildest expectations. At Kickstarter we are raising money to help turning our working prototype into final products available on the market in February 2013.”

The Instant Lab includes: a cradle to hold the iPhone; a specialized lens to focus the iPhone’s retina display on the film plane; an extendible bellows to keep the exact distance between the phone, the optical system and the film; a dark-slide “shutter” to protect the film in the device; and a film processing unit as the base of the device.

An accompanying iPhone app will allow Instant Lab users to select and crop an image and start a countdown timer. The app will then do all the necessary calculations to create a proper exposure on any kind of Impossible instant film.

By October 8, Impossible aims to raise a minimum of $250,000 to realize production of the Instant Lab. Besides prepurchasing the Instant Lab at up to half off the final retail price, supporters have the chance to get one of the Kickstarter-exclusive Instant Lab special editions—such as the all-black or the limited gold edition, personalized with an engraved text. Retail prices start as followed: basic silver version with one film voucher, $149; all-black edition with two film vouchers, exclusive on Kickstarter, $299; and gold limited edition with personal engraving, the founder’s tour and 10 film packs, $2,000.

To view a video on the Instant Lab, visit http://www.kickstarter.com/projects/impossible/impossible-instant-lab-turn-iphone-images-into-rea.

Impossible invents and manufactures new analog instant films for classic Polaroid 600, SX 70 and Image/Spectra cameras as well as for 8×10 cameras at the former Polaroid production plant in Enschede, The Netherlands. Impossible Project Spaces in New York City; Paris, France; Tokyo, Japan; and Vienna, Austria, serve as hubs for analog instant photography. Beyond carrying all available analog films and cameras, a range of exhibitions, workshops and artistic projects are on view at every Impossible location.