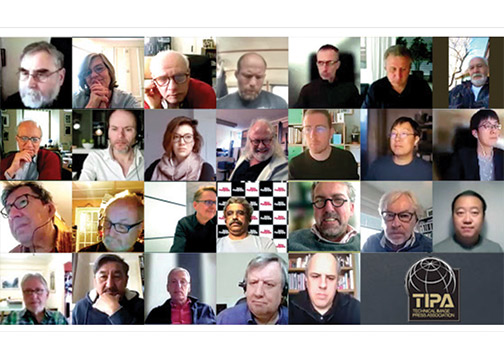 Madrid, Spain—The Technical Image Press Association held its TIPA General Assembly 2021 meeting on April 30, 2021. However, due to covid restrictions, the assembly took place over Zoom. Despite the inherent time differences between Australia, the United States and Europe, a full complement of editors and representative of TIPA members from around the world attended.

The meeting began with a welcome from Thomas Gerwers, chairman of the TIPA board. Moreover, he noted that 2021 marked the 30th anniversary of the now worldwide organization. TIPA began in 1991 as a nine-member European–publication–only group. Furthermore, he recognized that one of the original members, Giulio Forti, was in attendance at that first gathering. Forti is now vice chairman of TIPA.

Gerwers also gave a brief synopsis of the state of the industry during the past year. Despite a drop in sales and production, he noted, “The industry’s enthusiasm for innovation remains high; evidenced by the plethora of products we considered for our TIPA World Awards nominations.”

In regard to member publications, two new photo magazines, from Turkey and Great Britain, were introduced and approved by members to join the association. They are Photoline and British Photographic Industry News.

What’s more, due to timing issues caused by the coronavirus, TIPA’s board and technical committee voted on the Camera Grand Prix prior to the GA. They will release the results shortly.

Gerwers also welcomed Makoto Suzuki, representative of the CJPC (Camera Journal Press Club), who attended the meeting from Tokyo. In more news, Gerwers expressed hope that the 2022 General Assembly would be in person. He also announced that the meeting will take place at Leitz Park in Wetzlar, Germany, early spring next year.

One of the main events of the meeting is the selection of the winners of the TIPA World Awards. Along with cameras and lenses that cover every segment, from entry level to expert and professional, TIPA World Award winners in 40 categories represent the wide range of products and services that make up the imaging industry today. Products include inkjet papers and printers, imaging software, still and video accessories, lighting, as well as monitors.

“Each year we have more and more products and new and exciting technology that will continue to fuel growth in our industry,” said Gerwers. “Given the extraordinary circumstances the world and our industry face today, and in our hope that we will overcome the current situation, we felt that we should continue with our efforts in supporting the industry by recognizing the best imaging products of 2021.

“We believe now more than ever our support of the industry and the people who work so hard—in production, distribution or marketing—deserve credit and our thanks and appreciation for their efforts to continue to develop new and exciting products that both expand imaging creativity and potential and point the way to new and exciting technologies in the future. Of course, while the process of nomination and selection of award winners had to adapt to the circumstances, we maintained our usual rigorous standards in our considerations.”

TIPA members voted on and approved the finalists in each of the 40 categories. TIPA member publications and websites will release the results on May 20, 2021.

The Technical Image Press Association (TIPA) is comprised of editors and representatives of photographic magazines from North and South America, Europe, Asia and also Australia.

Moreover, member publications span the consumer, professional and trade sectors. Each member magazine dedicates itself to bringing the message of the joy of photography to its readers. In addition, they also deliver technical, business and industry news and information.