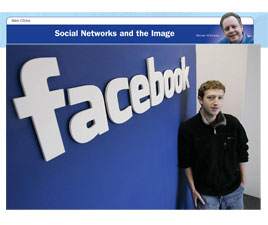 Pixable—makers of the Photofeed app, among other photo software programs—has just released a survey of consumers’ photo habits on Facebook. The information is based on profile photos from 500,000+ Pixable users. Some of the tidbits Pixable discovered:

• Women upload about one new profile photo every two weeks while men clock in at one every three weeks.

• The number of profile photos per Facebook user per year has tripled since 2006.

• The average profile photo on Facebook has three “likes” and two comments.

Facebook is estimated to have nearly 100 billion photos sitting on its servers. While we’re certainly not suggesting you tell your customers to use the service as their go-to site for photo storage thanks to privacy and other issues, it’s obviously become one of the premier destinations for their digital lives, and what they’re doing with their images on FB is definitely worth keeping an eye on. pixable.com

Tagging was arguably the feature that made Facebook the biggest photo site in the world and seeded the idea for creating the platform. Now the company has finally won a patent for it.

Nearly five years after the company originally filed for its invention, the U.S. Patent and Trademark Office recently gave Facebook a patent protecting the ability to select a region in a piece of media (like a photo or video) and associate people or other entities with it. Mark Zuckerberg, longtime designer-turned-product architect Aaron Sittig, and former Facebook engineer Scott Marlette were credited as inventors.

Many of your customers probably think the photos they’re uploading to social networking sites like Twitter and Flickr are theirs. They’re not. According to a report from The Next Web, sites like Twitpic, picplz, Color, vFrog, Instagram, Flickr and Lockerz (fka Plixi) all stipulate that they have the right to use posted photos for their commercial gain.

Of course, this isn’t usually stipulated up front when the user is signing up for these services. It’s buried in the legalese in the “terms of service.” As painful as it is to read a site’s terms of service, it’s really the only way to discover how a website will actually handle photos.

It seems for now there’s something of a split between how websites handle consumers’ images. The “photo” sites that are designed to store and make prints/merchandise from images (think Shutterfly, Snapfish, etc.) are not as interested in harvesting photos to sell to others. But social networking sites and applications like the ones mentioned above are explicit in stating that the photos being uploaded to their servers no longer belong to the uploader. As the Latin phrase famously warned: caveat emptor.

One-third of the retailers surveyed cited listening to customers as a key benefit of Facebook. Source: Shop.org’s 2011 State of Retailing Online Survey

DxO Labs launched the latest version of DxOMark (dxomark.com), its online, freely accessible resource for image quality data and analysis of digital cameras and lenses. In addition to reporting on more than 1,700 lens/camera combinations, the updated site includes new features that enable users to select cameras and lenses that meet their performance metrics, price range and other important criteria.

Other website improvements include an easy-to-use comments section and a manufacturer specifications section, along with expanded community sharing tools.

Online graphics service provider Mister Clipping completely redesigned and rebuilt its website as well as its entire project assignment process; a user-friendly online wizard now manages the workflow, from the uploading of an assignment to the downloading of processed images.

Mister Clipping specializes in handmade clipping image paths and/or masks to isolate objects from their background for studios, photographers, photo retailers and end users—as well as other graphical services to further manipulate images. Through the new site, it will now be able to more effectively provide a wider range of services, which are offered for a few dollars per image and reduce workloads and project times for clients.

And, the options for uploading and downloading images have been expanded, capacity has been increased tenfold and the new site is up to eight times faster than the previous one. Moreover, the new online platform will support strong international growth for the Netherlands-based company, which recently opened an office in Freehold, New Jersey. Clients can now receive service during U.S. office hours and payments are now accepted in U.S. dollars. The services offered by Mister Clipping will be expanded in the coming months and will gradually be included in the new online environment.

The MisterClipping.com application is designed to easily process a single image or tens of thousands of images. Images are guaranteed to be isolated and returned via the online platform within one to 24 hours, regardless of the number of images. misterclipping.com