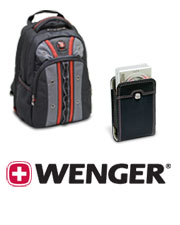 North Syracuse, NY—Wenger has successfully broken up a counterfeit operation at a factory located in the Huadu district of Guangzhou, China, where several hundred fake Wenger backpacks were being manufactured.

Wenger products are distributed in the U.S. by Wynit, a national distributor with a 20-year history of selling internationally branded products in the consumer electronics, digital photography, print and presentation, video editing, outdoor, security and photo ID market categories.

On July 11, Wenger investigators and officers from the local Administration for Industry and Commerce (AIC) raided the 3,000-square-foot factory and seized a total of 716 counterfeit Wenger backpacks.

“Counterfeiting is a global problem affecting not only Wenger, but our entire industry,” said Wenger’s CEO, Peter Hug. “We take great pride in the quality of our products and our brand’s reputation for fine craftsmanship. Bringing an end to this counterfeit operation is a victory for Wenger and ultimately our customers.”

According to Wenger officials, local authorities have confiscated and detained all counterfeit Wenger products from the Huadu factory, which had an estimated workforce of 20 people. The individual involved in running the counterfeit operation was immediately fined and summoned to the AIC office for further investigation.

A report by the U.S. Chamber of Commerce stated that counterfeiting and piracy cost the U.S. economy between $200 billion and $250 billion per year and a total of 750,000 American jobs. wynit.com